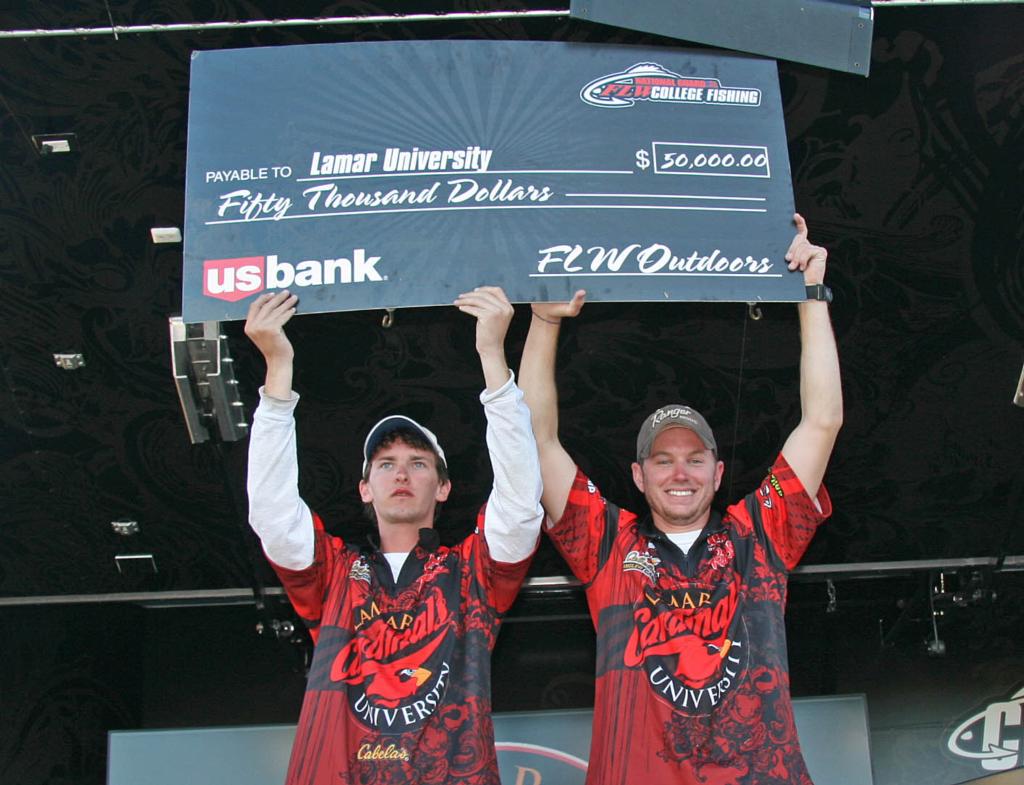 The duo began their campaign with a day one weight of 17-14 and a 12-ounce lead over their closest competitor. On day two, they added the event’s biggest catch – 21-0 – and extended their lead to 6 pounds, 2 ounces. Catching the only full limit of the final round, Iles and Morrison, sacked up 12 pounds, 6 ounces for a three day total weight of 51-4. Prevailing by a margin of 8-15, the Lamar anglers won $25,000 for their college and a Ranger 177TR and engine for their bass club.

“Our goal coming in was to win it and we managed to accomplish that,” Iles said.

Despite the big lead they carried into day three, plus their limit catch in the final round, Morrison said he 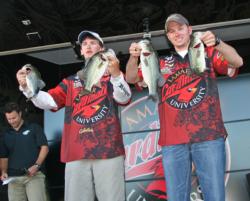 wasn’t ready to celebrate until he got the official word.

“I didn’t know what anybody else had, so I was sweating it the whole time,” he said. “Yesterday, we got our limit fairly quickly, but today we didn’t get out full 6-fish limit until about an hour before check-in time.”

With a cold front arriving on the event’s opening day, anglers faced strong north winds that limited where and how they could fish. Day two brought classic post-frontal conditions – high pressure, clear bright skies and less wind. That should have been the worst day of fishing, but it actually saw the greatest productivity across the board and the Lamar team got a big chunk of that action. 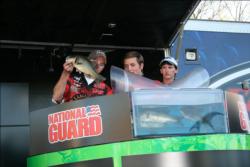 Overnight temperatures dipped into the upper 30s and the final day saw the wind switch to the south. That change threw the proverbial monkey wrench into many game plans, but Iles and Morrison played the hand they were dealt, determined a necessary adjustment and ended up as the only team to catch their full limits each day.

“The fish had pulled out from the grass and they were hanging out around the stumps in the shade. We’d throw next to a stump and catch one. We caught some little ones and then we caught our keepers doing that.”

The Lamar anglers caught four of their keepers on the Caffeine Shad, one on a spinnerbait and one on a Texas-rigged Zoom Ol’ Monster worm in redbug.

“We made a big run today – we burned a tank of gas,” Iles said. “We picked a lot of different places and hit them.”

Andrew Shafer and Paul Manley, the Texas A&M anglers who won the 2009 Western Regional, made a 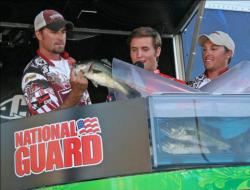 strong run at the repeat, but come up short with a second place total of 42-5. Nevertheless, starting day three in fourth place with 28-2 – compared to Lamar’s 38-14 – the A&M anglers put together an impressive performance with the largest catch of day three – 14 pounds, 3 ounces.

“Especially being 10 pounds behind going into day three, and to be in 12th place after day one and then climbing all the way to second – it was a good comeback.”

“The lack of wind hurt our bite some,” Manley said. “We never got a morning bite at all. I wasn’t able to catch a fish until 12:30. It picked up in the afternoon, but we made a move about an hour too late.”

University of Texas-Tyler slips to third 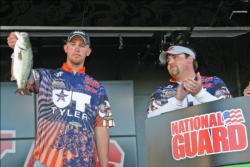 on day two, but gave up one spot on the third day. Their tournament total was 42-2.

McClellan and Fisher found big fish on the first two days and caught the tournament’s second heaviest bag (20-12) on day two. The final day saw them coming up one fish shy of a full limit and with five fish weighing 9-6, the big bites clearly did not happen for them.

“I think the big difference was that the first two days we had winds out of the north and that positioned the big fish. Today, the wind was out of the south and that didn’t put the fish in the classic spots where it was easier to catch them.”

The anglers started their day fishing Rat-L-Traps over points and then switched to throwing Spro frogs over lily pads for big bites. Unlike the first two days, the pads yielded nothing today, so they weighed only the smaller fish that they caught on Traps.

LSU Shreveport’s Zach Caudle and Joe Landry placed 14th on day one with a four fish bag weighing 9-13. A day later, they stormed back with a full limit of 17-3 that pushed them into the top five. Anchoring 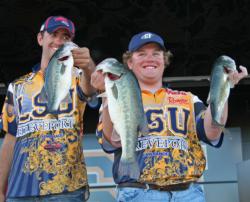 On day three, Caudle again struck pay dirt, this time with one that went close to 6 pounds. Caudle caught the big fish on a Texas-rigged 10-inch worm in standing timber.

“I’m a good guide,” Landry joked. “I told him to cast there. We were heading to an area of shoreline grass, but we had to pass through this timber to get to it, so I told Zach to cast in there and he caught that big fish.”

LSU Shreveport ended up catching two more keepers in the standing timber. Their 3-fish bag of 10-7 gave them a fourth place total of 37-7. 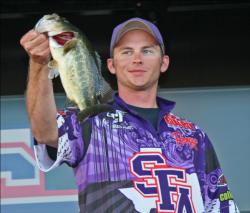 keepers. With a total tournament weight of 36-15 they yielded two spots and ended with a fifth place finish.

Representing the hometown school with class and determination all week, the anglers started the day 8 pounds off the lead. Their plan was to devote their entire day to throwing Spro frogs for big fish in lily pads. On day two, they had found fish super shallow, so day three saw Watkins push poling the boat in as far as possible. They got their shots at pad giants, but unfortunately, most came unbuttoned.

“We were in a position where we had to go big or go home,” Watkins said. “The opportunity was there. We had them on. That’s just the way it works out, but we’re happy to be where we’re at so we can’t hang our heads about that.”

Platt said it was tough watching their chance slip away, but knowing that they put themselves in position to score big brings some consolation. “I broke off an 8-pounder, but we’d rather have the opportunity to win and lose it than to have never had the opportunity.”