Gators gear up for repeat 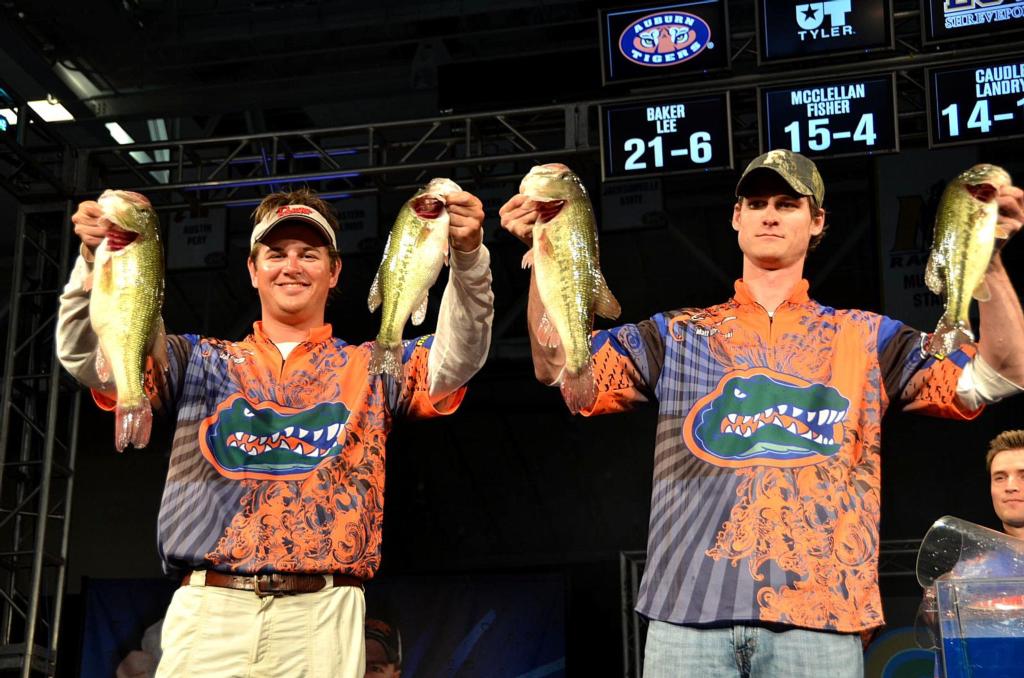 MURRAY, Ky. – After lurking in fifth place overall after the first day of National Guard FLW College Fishing National Championship competition, the University of Florida team decided to make their move. While a host of top contenders struggled on the water today, the Gators – comprised of the potent duo of Jake Gipson and Matt Wercinski – turned it up several notches and landed by far the biggest stringer of the afternoon at 14 pounds, 12 ounces. That gave the boys from Florida a two-day total of 27 pounds, 4 ounces and, most importantly, the overall lead heading into the final day of championship competition on Kentucky Lake.

In short, Gipson and Wercinski are starting to look something just short of unstoppable.

“We know we can fish and we came here to win,” said Wercinski. “We didn’t come here to go after second place. Now, it’s just a one-day tournament. And we’re feeling pretty good right now.”

Gipson said that amazingly enough, things didn’t look very bright for the team leading up to the event.

“Our practice was terrible,” said Gipson. “We only wound up catching one keeper. So when the tournament started, we decided to just go fishing. We really fished with our gut.”

By endlessly studying any Kentucky Lake maps they could get their hands on and relying on years of fishing experience, the team hit the water on the first day of competition hoping to put something together. By the end of day one they had amassed a good-but-not-great 12-pound, 8-ounce sack. But then came Friday’s competition.

“We just went out there and went fishing,” said Gipson. “We only had two fish in the boat by 10 a.m. and I was starting to get nervous. But at 10:30 a.m. things really picked up and we had a limit pretty quickly after that. We’re fishing north about 10 minutes from the marina and we’re basically running and gunning and covering a lot of water. We’re really trying to fish different stuff every day.”

The Gators said their strategy in Saturday’s final will be two-fold.

“We have one spot that’s very active in the morning and we’ll probably fish that for about 30 minutes,” said Gipson. “Then the rest of the day we’ll try to grind it out and cover a lot of water trying to get a bigger limit.”

With a national championship title on the line – again – for the team of blue and orange, what weight will the Gators be shooting for?

“I think we’ll be comfortable with 16 pounds,” said Gipson. “There’s definitely the potential for some really big bags on this lake. The fish are starting to move up and they really want to spawn. And there is going to be some local pressure on the lake this weekend so I’m not sure how that’s going to play out. But I think if we get 16 pounds we’re going to be tough to beat.”

Bolstered by a two-day catch of 25 pounds, 9 ounces, the LSU Shreveport team of Zach Caudle and Joe Landry maintained their runner-up status for a second consecutive day. However, instead of looking up at the day-one leaders from the University of Texas-Tyler, they’re now facing the tall order of defeating the 2010 FLW College Fishing defending champions – a daunting task to say the least. However, if you think the LSU Shreveport team isn’t mentally prepared to surmount that hurdle, think again.

“We thought we had a good chance to be standing here and here we are,” said Landry. “We knew we had a good shot after yesterday and now we have a shot to win the title. We’re definitely in contention for the championship. We can win this. Our goal is to catch 15 pounds tomorrow. And if we do that, I think we have a great shot at the title.

“But we still have a lot of work to do,” Landry continued. “We know how to target the fish to win. We just have to execute. We’re fishing for $100,000 so we’re going to keep our heads down and try to catch the biggest stringer we can. Florida, here we come!”

While the LSU Shreveport team acknowledged that it won’t be easy to snare a national championship title, they said they couldn’t be more ecstatic about having the opportunity to try.

“Right now we just won $10,000 minimum so that’s pretty exciting,” said Caudle. “But you’re also in a position to win a national championship title and get to fish in the Forrest Wood Cup – and that’s just amazing.”

As far as strategies are concerned for the final day, Landry said they’re going to continue doing what’s worked all along.

“Basically we’ve being fishing drop-offs, sloping banks and shell beds,” he said. “We’re using two rods with two primary baits. But the key is that you have to fish slowly. We’re really just grinding it out.” 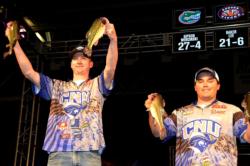 Like Butler and VCU in NCAA college basketball, the Christopher Newport University team of Joe Wilkerson and Ryan Ingalls has all the makings of the underdog story of the season.

“We’ve actually had a lot of bad luck this year,” said Wilkerson. “I sunk a boat at the Lake Champlain tournament.”

“And my boat broke down during practice for the championship,” said Ingalls. “We actually missed three to four days of practice fishing because of it.”

Throw in the fact that very few people in the entire college championship have even heard of Christopher Newport University – a small public liberal arts college in the Hampton Roads area of Virginia with a total enrollment of 4,793 students – and it’s pretty clear who the underdog is at this event.

But given all of that, it didn’t prevent the duo of Wilkerson and Ingalls from turning in an awesome performance worthy of any big-time university – recording a total two-day catch of 23 pounds, 11 ounces for third place overall heading into the finals.

“We caught a lot more fish today than yesterday but the quality was just a little bit less,” said Ingalls. “I had two fish hop off my line and we didn’t catch our last two fish until after 1:30, so it was pretty nerve-wracking. But we’re cautiously optimistic about tomorrow. We just hope we can get some bigger fish to bite.”

According to the team, they caught every keeper bass on a single, not-yet-divulged bait in two different colors.

So what does it feel like to be fishing for a national championship, going up against the Goliaths from the University of Florida, Auburn, N.C. State and LSU?

Auburn back in the big show 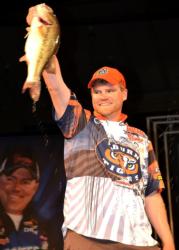 After finishing the 2010 FLW College National Championship in third place, the team from Auburn University desperately wanted to have a chance to have another shot at the title. And today they did just that. After finishing the first day of competition in seventh, the Auburn team of Shaye Baker and Jordan Lee put together a two-day catch of 21 pounds, 6 ounces to grab the fourth qualifying position heading into the finals.

“It was tough out there,” said Baker. “We only caught three fish today. We had our big bass by about 10:30 a.m. but after that, the bite really shut down. But we’re having a great time out there. It’s unbelievable to have this opportunity to be fishing for a national championship again.” 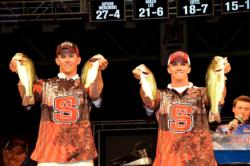 Although it was a tense weigh-in, the N.C. State University team of Ben Dziwulski and Kevin Beverly pulled it out in the end, leapfrogging one spot in the standings to grab the fifth and final berth in the finals with a total catch of 20 pounds, 9 ounces.

“We probably lost about 9 pounds of fish the last two days so it’s been tough,” said Dziwulski. “Today the bite was kind of weird. I lost a 2 1/2-pounder that really would have helped. And Kevin lost a 3-pounder yesterday. So we’re pretty happy to make the finals.”

After the conclusion of Saturday’s weigh-in, the tournament title will be awarded to the college team that has recorded the most combined weight over all three days of competition.

The national championship winning team will receive $50,000 cash, a Ranger 177TR with a 90-horsepower engine wrapped in school colors for their school’s bass club and $25,000 for the school they represent – for a total prize package valued at $100,000.