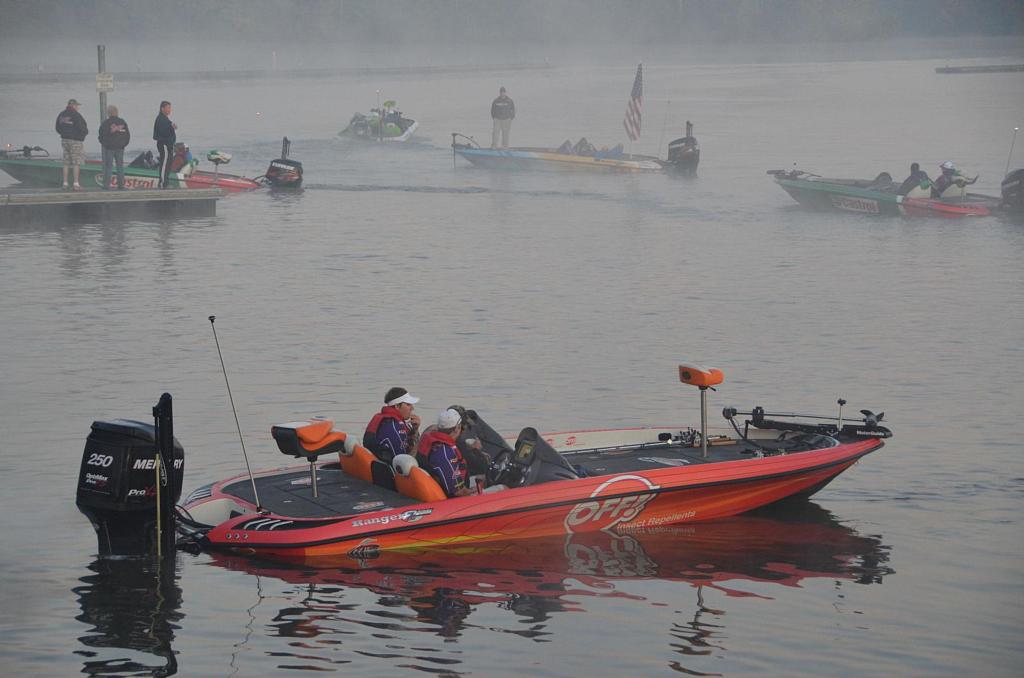 CARBONDALE, Ill. – With decidedly foggy conditions, a gorgeous sunrise and a crisp chill in the air dominating the early morning landscape, the top 20 college teams from the FLW College Fishing Central Region departed Kinkaid Lake Marina shortly after 7 a.m. to kick off the start of the regional championship.

At stake is not only a tournament title, which comes with a top award of $50,000, but also five premium berths in the prestigious 2012 FLW College Fishing National Championship. But before anglers can begin to entertain thoughts of the bigger picture, they must first concentrate on the immediate task at hand – preventing a day-one stumble.

“We got here last year and had a really poor finish, so hopefully we can do a lot better this time around,” said Purdue University’s Chris Kaiser. “Our first priority is to get a top-five finish (and qualify for the national championship). Then, if we accomplish that, we can really go for the title on that final day.” 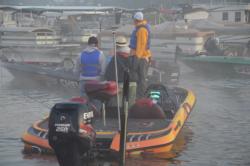 Fishing on Kinkaid Lake promises to be challenging if early reports are any indication. Recently, a few local events on the lake produced winning stringers in the 13-pound range. In addition, the relatively small size of the lake will force college anglers to stake out their prime fishing locations as early as possible.

“The lake doesn’t fish that big, and we’re sharing a lot of water – we found that out in practice,” said Kaiser. “But the good news is that on Kinkaid, you can really be versatile and fish to your strengths. We have five different rods with five different baits tied on. But we’ll probably wind up fishing a lot of grass mats, flipping frogs and throwing some topwaters as well.”

Other anglers acknowledge that the winner of this tournament will have likely earned it by the time final weigh-in has concluded.

“It’s been a tough bite so far,” said Cade Laufenberg of Winona State University. “We’ve been catching a lot of small fish, but we’ve found that the bite is a little better out in deeper water – in the 6- to 8-foot range. We’re going to be throwing a lot of moving baits, trying to imitate the shad bite around submerged vegetation.”

So what will it take to advance to the finals?

“It’s hard to say, but my guess is that 14 pounds over two days should be enough,” said Laufenberg. “You’re probably going to need about 10 to 12 pounds a day to win. As for us, we’re just shooting for a limit today. If we can wind up with 11 pounds or more, I think we’re going to be feeling pretty good.”

That range seemed to square with the thoughts of the field at large.

“I think it’s going to take 8 pounds a day to qualify and about 10 to 12 pounds a day to win,” said Kaiser. “But since the weather has warmed up, the bite has gotten a little bit tougher. So we’ll see.”

No matter how the tournament shakes out, most anglers were just happy to get the opportunity to fish the regional championship after surviving the season’s four grueling qualifying events.

“I’m really excited,” said Kaiser. “It’s an honor to be here competing with these teams. It should be a lot of fun.” 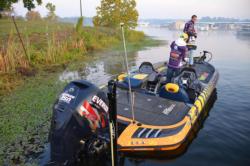 Twenty college teams will compete for a top award of $50,000 to be split between the school and bass fishing club; $37,500 for the bass club, which includes $12,500 in cash as well as a Ranger 177TR with a 90 horsepower Evinrude or Mercury outboard wrapped in school colors, and $12,500 for their school.

Anglers will take off from the Kinkaid Lake Marina located at 2063 Marina Road in Murphysboro, Ill., at 7 a.m. daily. All weigh-ins will be held at the SIU Arena located at 1400 Arena Drive in Carbondale, Ill. Thursday and Friday’s weigh-ins will begin at 4 p.m., and Saturday’s final weigh-in will be held at 5 p.m., or upon the completion of the SIU vs. North Dakota State football game. Takeoffs and weigh-ins are free and open to the public.

(Note: Although Carter Norman of the University of Arkansas, Little Rock, and Brandon Patterson of Kansas State University qualified for the regional championship, both anglers are unable to compete this week due to scheduling conflicts).

The top five teams from FLW College Central Regional Championship will advance to the FLW College Fishing National Championship, which features a first-place award of $100,000; $25,000 for their school and $50,000 cash and a Ranger 177TR bass boat with a 90 horsepower Evinrude or Mercury outboard wrapped in school colors for their fishing club.

SIU will host the College Fishing Festival throughout the three-day tournament. Students and fishing fans alike will be treated to the National Guard Warrior Challenge, a Ranger Boat simulator, tailgate games, a sports zone along with contests for cash and several prize giveaways. The festival will take place at the SIU Arena from 2 to 4 p.m. Thursday and Friday, and 11 a.m. to 2 p.m. on Saturday. 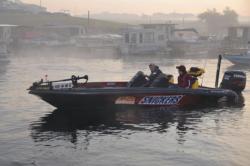 Coverage of the Central Regional Championship will be broadcast in high-definition (HD) on VERSUS. That episode of “FLW Outdoors” will air Nov. 20 from 1-2 p.m. ET. “FLW Outdoors,” hosted by Jason Harper, is broadcast to approximately 500 million households worldwide.