Bates and Collins pull ahead at College Fishing Texas Regional 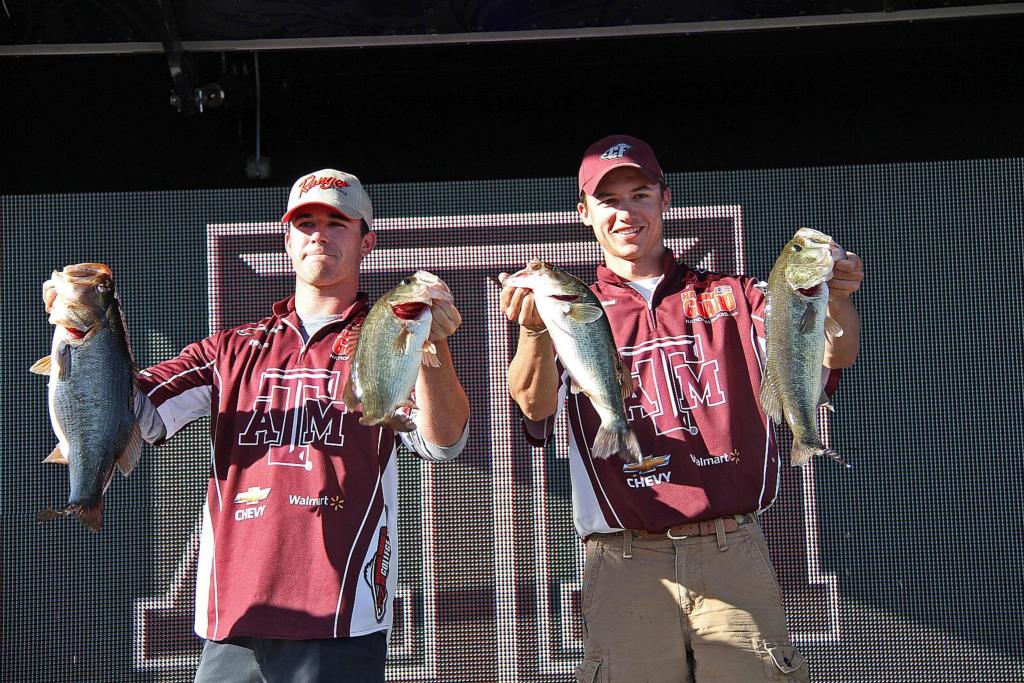 Flash back to day one: The Aggies bring two heavy sacks to the scale and both anglers reach in to retrieve fish that they’d display to the home crowd. Bates is slow in pulling his out because he’s trying to tame a 9-pound, 12-ounce toad that anchored a second-place, 19-pound limit. Today saw a similar deal with Bates yanking out another big bass that went 6-7. Four other quality fish would give Texas A&M a day-two effort of 19-15 and lift the team into first place with a 38-15 aggregate.

Still processing the thrill of his day-one beast – his personal best – Bates said that catching a big kicker two days in a row was certainly rewarding, but he was most pleased with his team’s overall day-two performance. Look at the day-one math: Subtract 9-12 from 19 and the Aggies’ remaining four fish made up a little over 9 pounds. Today, subtracting Bates’ big bass from the team’s total leaves 13-8 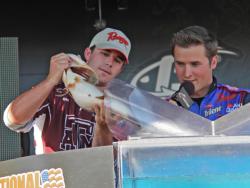 spread over four other fish. That’s a better average.

“The morning started off better for us – we actually got some 3-pound fish,” Bates said. “That’s what we wanted to do. We wanted to be consistent. We didn’t want that one fish to be a fluke for us.”

Unlike his day-one lunker, which bit in very shallow water about an hour after takeoff, today’s big one bit around noon in four feet.

“That bigger fish came in the middle of the day today,” Bates said. “It was kind of a surprise to both of us, but we knew they lived there and we were fortunate enough to get another big one and that helped us out big time. 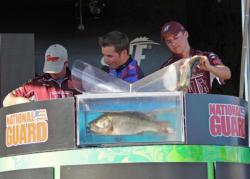 “This was a different location than (yesterday’s) fish. It’s an area that we’d look at in practice. We didn’t hit it too much yesterday – there were actually quite a few boats on it. It wasn’t hit nearly as hard today and we were able to get in there and catch them.”

The leaders started their day by fishing slowly with plastics. The plan was to play conservatively and lock up their final-round berth by securing a limit. When that failed to produce more than a couple of keepers, they went back to the unnamed reaction baits that produced their day-one catch.

Collins credited his team’s success to maximized opportunities. “We did a good job of fishing a lot cleaner today. We didn’t lose any fish. We got the fish in the boat. When they bit, they got in the boat and that really helped us today. We did get a lot more bites and a lot better bites today, as far as the quantity goes. We got those 3-pound bites that we didn’t have yesterday.”

After leading day one with a 21-pound, 5-ounce bag that stands as the tournament’s largest and the only one over 20, Stephen F. Austin’s Andrew Upshaw and Ryan Watkins struggled to find the quality bites they had yesterday. Adding another solid limit of 14-11 gave them a two-day total of 36-0 that dropped them to second place.

The first half of the day saw lighter winds than yesterday and Watkins believes that this may have affected his team’s productivity. “In the areas we fished, our big fish didn’t show up. I think they needed a little more wind and the pressure obviously got to them a little bit.

“We wanted to catch them a little better, but we’re not going to complain about 14 pounds. We’re right there in contention and we’re going to do what we do best tomorrow and go swing for the fences.” 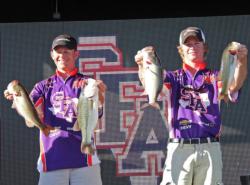 The SFA team fished mostly crankbaits today and Watkins noted that they had to switch colors today. In practice, a brown/green crawfish pattern produced best, but yesterday the fish wouldn’t touch anything but a shad pattern. Today, the crawfish pattern returned to prominence.

The SFA anglers are working about five main areas and keying in on brief stretches of about 30 yards. The fish are coming and going, but Upshaw said that he and Watkins figured out a replicable pattern that should help them on day three.

Shafer and Brown hold at third 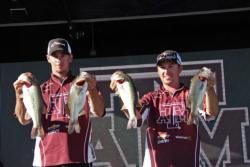 Holding steady at third, Andrew Shafer and Weston Brown secured a second final-round berth for Texas A&M by catching 14-14 on day two and tallying a total weight of 33-7. A stronger day-one performance saw the Aggies weigh a limit of 18-9, but today proved move challenging.

“I don’t know that we really had anything key today,” Shafer said. “It was a grind for us. We struggled, fished a lot of spots and we were able to put together a limit. Hopefully tomorrow, there will be some fish on the stuff we fished today.”

Shafer and Weston fished a variety of soft plastics on Texas rigs, Carolina rigs and shaky heads. “I think the fish are feeling the pressure and slowing down is the key right now.”

Brown said his team hit about 20 spots today and found most of their action in the morning.

Moving up from sixth place on day one, LSU’s Timothy Morris and Richard Murdock added a limit of 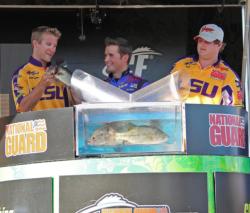 13-7 to their day-one score of 15-14 and claimed the fourth-place spot with a 29-5 total. Morris said that he and Murdock formulated a solid game plan based on staying near quality fish and stuck with it.

Murdock said his team focused their efforts on an old road bed and hammered it with Excalibur square bill crankbaits in red craw pattern all day.

“We didn’t put (the crankbaits) down and try something else, so I think perseverance was the key,” he said. “They wouldn’t bite the shad pattern and they wouldn’t bite hardly anything else. It was the red craw that they wanted.” 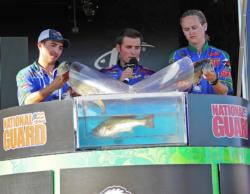 Exemplifying tenacity and perseverance, Jacob Heath and Kennedy Schwartzburg endured multiple heartbreaks only to find themselves on the receiving end of fortune’s whim. All seemed lost but the anglers ended up putting together the day’s second-heaviest bag – a 15-6 effort that pushed their two-day total to 28-2 and put them in fifth place.

“Today was the most roller-coaster fishing day I’ve ever had in my life,” Heath said. “We had two fish bigger than the (6-pounder) we weighed get off and I was at an ultimate low. We were sitting there with two fish in the live well and me and (Schwartzburg) we were just down – probably the worst I’ve ever been.

“Then all of a sudden, he jacks this big one and it was like a rush. I lost it. I started screaming and people on the (shore) heard me. I was going nuts!”

Rounding out the top-10 leaders at the Texas College Regional Championship: