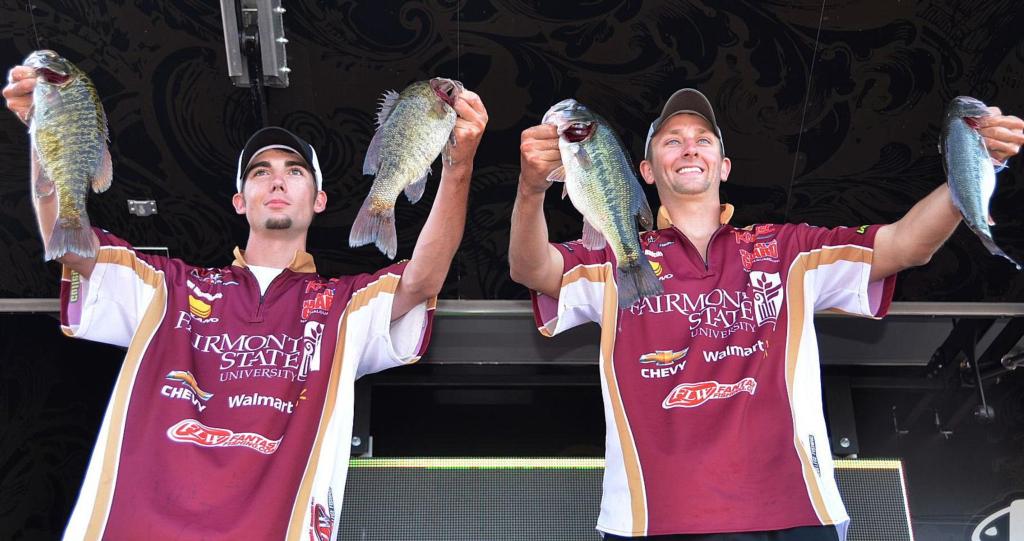 MARTINSVILLE, Va. – Despite having a difficult practice, the Fairmont State University team of Ryan Radcliff of Parkersburg, W. Va., and Wil Dieffenbauch of Hundred, W. Va., made amends when it counted most, parlaying a day-one catch of 9 pounds, 10 ounces into the top spot in the standings heading into Friday’s competition.

Entering today’s competition, the team had simply hoped to get five fish in the boat. Obviously, they exceeded their expectations – and then some. And they couldn’t have been happier.

“It feels awesome especially after a not-so-great practice,” said Radcliff. “We came in here hoping to catch five fish. We knew if we did that that we’d be all right. As my partner said, you can’t win the tournament on the first day, but you can lose it. So overall, we’re feeling pretty good right now.”

For the Fairmont State University team, the strategy was to cover as much water as possible in an attempt to land five decent limit fish in the boat.

“We ran around to a lot of different spots today and we really tried to cover a lot of water,” said Dieffenbauch. “We probably have 15 to 20 spots overall but we’re also trying to save some of our fish for later on in the tournament. We do have a pattern, but we have to hit a bunch of areas just to get a limit. We’d stay in an area anywhere from 15 to 45 minutes, depending on the bite, and then move one. And we’re going to be doing the same thing tomorrow. But it’s tough. You really have to be patient. Another thing is that the largemouth bass don’t act like largemouth here – they act more like spotted bass. So that makes it a little bit of a challenge as well.”

While they didn’t want to divulge the specific baits used in today’s competition, Fairmont State said they didn’t rely on one single weapon.

“We ran to a lot of spots and probably used four different baits today,” said Dieffenbauch. “We really did a mix and match with our baits as well as the water depth. Overall, I think we wound up culling four or five times.”

So what separated Fairmont State from the rest of the pack, especially since there were only six, five-fish limits turned in all day?

“I think all of the teams in the top five are doing the same thing we are,” said Dieffenbauch. “But we have a couple of baits that I don’t think any other team is using.”

Bolstered by an 8-pound, 13-ounce catch, the Ramapo College team of Jeffrey Voss of Secaucus, N.J., and Joseph Zapf of Whippany, N.J., finished the opening day of competition on Philpott Lake in second place overall.

“We feel like we’re in pretty good position right now; we’re pretty much exactly where we want to be,” said Voss. “We wanted to finish the day in the top three and we did that. If we fish well tomorrow and catch another limit, we should make the top five.”

Voss said the team found most of their key areas in practice, focusing in on deeper structure.

“We found our spots in practice but the key for us was fishing slow and keying on structure,” he said. “We only fished about half of our (20 total) spots today so we have a lot more water to fish. And we used a couple of different baits today. But on this lake, you have to be in the right place at the right time. Because when those fish turn on to feed, you have to be on them.”

The team said that overall, they won’t be changing things up too much in Friday’s competition.

“We might fish a few different areas tomorrow, but mostly we’re going with the same game plan,” said Voss. “It’s really all about knowing where those fish are going to be.” 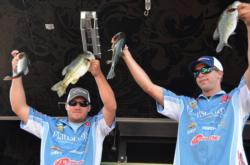 Heading into today’s competition, the SUNY Plattsburgh team of Chris Benninger of Grand Island, N.Y., and Richard Lee of Port Kent, N.Y., were almost at a complete loss as to what to expect. After suffering through a miserable practice, the team just hoped they could get on something, anything at all to give them a chance a tournament title. Well, today, they finally found what they’d been searching for. Using a total catch of 8 pounds, 3 ounces, Plattsburgh managed to grab third place overall heading into Friday’s competition.

“It’s a big relief,” said Lee. “We had a terrible practice and we were honestly wondering what we’re going to do. Today we just decided to go somewhere on a complete whim and it really paid off. We’re just happy to get five fish in the boat.”

“We wound up covering a lot of water,” said Benninger. “And we used two or three techniques all day long.”

While the team didn’t want to get into specifics, the anglers acknowledged that they just might have picked up on something that could propel them to Saturday’s final day of competition.

“We found a pattern today and that’s what we’re going to stick with,” said Lee. “If we can figure out the exact depth the fish are at tomorrow, we could come back with a really big bag. But depth is definitely a key for us.”

“Hopefully we can carry through everything we learned today,” said Benninger. “But if not, it could be a long day tomorrow.” 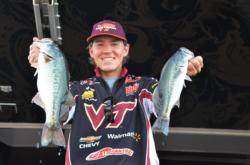 Fishing without a partner on day one, Jody White of Virginia Tech steered his way to a fourth-place finish after landing a yeoman-like catch of 7 pounds, 10 ounces in today’s competition.

“I’m really happy,” said White, who currently hails from Shaftsbury, Vt.. “I think I discovered a couple of things that will help us out tomorrow. And on Friday, I’ll have my partner back. We’re in a great position now to make a jump in the standings. I love where we’re sitting right now. All things considered, I couldn’t have asked for anything more.”

White’s partner, David Bryant of Covington, Va., couldn’t make today’s round of tournament action due to a prior work commitment. However, he will be back with the team during the all-important cut day tomorrow.

Meanwhile, White put on a veritable fishing clinic fishing solo, nailing down one of the few five-fish limits caught in the tournament so far.

“I caught my fish all over today, from 13 feet to 70,” said White. “However, I think the morning bite is going to be key for us. I really think that the best chance of getting a big fish is before 9 a.m. on that topwater bite.”

“I am running a bit of a pattern,” continued White. “I’m targeting points with a specific look to them. And I used a combination of topwaters, crankbaits and drop-shots today. I actually spent too much time fishing a jig and I probably won’t do that again tomorrow. But mostly, I’m going to go with a similar game plan.” 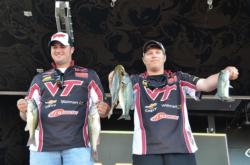 The team of Anderew Jackson of Lebanon, Va., and Patrick Snellings of Fredericksburg, Va. – one of three Virginia Tech teams to qualify for the northern conference championship – finished the day in fifth place overall with a total catch of 7 pounds.

“This was the hardest limit I ever fought for,” said Snellings. “It’s a really tough bite. We wound up running around all over the place and we’re lucky to scratch out a limit.”