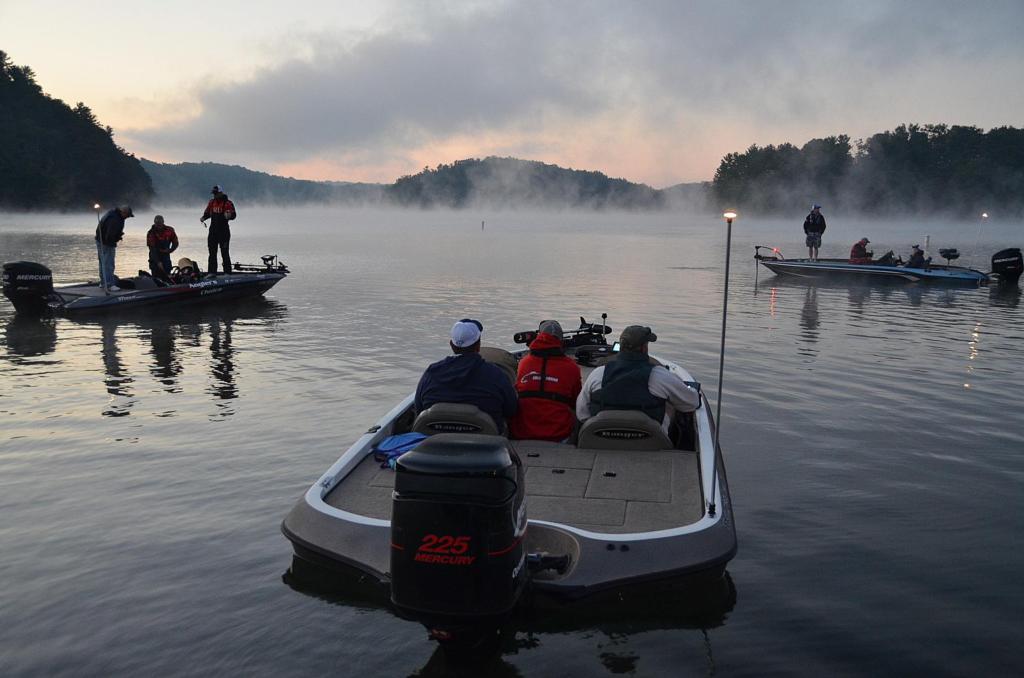 MARTINSVILLE, Va. – With brisk temperatures, a hazy sunrise and a ghost-like mist drifting off the landscape, 20 of the top Northern Conference qualifying teams hit the open water of Philpott Lake shortly after 7 a.m. to commence the start of the three-day National Guard FLW College Fishing Northern Conference Championship.

Although most of the competitors are visiting Philpott Lake for the very first time this tournament, it appears that it didn’t take long for the field to discover just what exactly they’ll be facing on this secluded and remote Virginia waterway.

“It’s going to be a real tough tournament,” said Fairmont State University team member Wil Dieffenbauch of Hundred, W. Va. “If you can catch five fish, you’re probably going to be in the top five in the standings today. A lot of teams are really going to struggle. Our goal, honestly, is to just get five fish in the boat.”

Other teams with limited practice time acknowledged that Philpott Lake will definitely present some challenges.

“We really weren’t able to get down here until yesterday so it’s the first time we’re seeing the lake,” said Ohio State team member Quinn Miller. “It’s really different from any type of water we have back in Ohio. This lake is really deep – 200 feet in some places – and it’s completely a structure lake. There just not a lot of cover. So we’re going to be fishing a lot deeper than what we’re used to, probably in the 20- to 60-foot range. Back home, we usually spend most of our time in 5 feet of water. It’s definitely going to be a good test of our skills.” 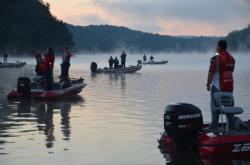 While Philpott Lake boasts plenty of fish, the key for the anglers is to get them to bite – a lot easier said than done given the fickle nature of their targeted quarry.

“We’re going to be covering a lot of water because you really have to find the areas where the fish want to feed,” said Dieffenbauch, who is making his fourth straight conference championship appearance. “The fish are really spooky right now. You can catch one or two fish on one location but after that, you pretty much have to move to another area because the fish are that (skittish).”

“You definitely have to be patient,” added Dieffenbauch’s teammate Ryan Radcliff, of Parkersburg, W. Va.

Anglers said they will try to attack Philpott Lake with a variety of soft plastics, drop-shot techniques and even a few topwater baits. However, in the end, getting somewhere near a double-digit stringer appears to be the ultimate goal of most competitors.

“I’d actually be surprised to see teams come back with much more than 10 pounds,” said Miller. “I really think if you wind up with 30 pounds over three days, you’re going to win this tournament.”

“My guess is that 8 pounds a day will get you into the top five,” said Dieffenbauch. “You might see some bags as high as 10 to 13 pounds, but that’s going to be pretty difficult.”

After a challenging four-tournament regular season that took anglers from North Carolina to Indiana to upstate New York, most of the 20 qualifying teams appeared happy just to have advanced this far.

“It really feels good to be here,” said Dieffenbauch. “This is my fourth time qualifying for the conference championship. We’re a pretty small school and to be able to compete against all of these big schools is pretty cool.”

Whether the competitors came from a big-time university or a smaller college, one sentiment seemed to be universal.

“This is my first regional but it’s already a really great feeling,” said Miller. “It’s a really great opportunity. I just hope we can take advantage of it.”

At stake for the field is not only a tournament title, which comes with a top award of a brand new, fully rigged Ranger Z117 bass boat with a 90-horsepower Evinrude or Mercury outboard, but also five automatic berths in the prestigious 2013 FLW College Fishing National Championship. 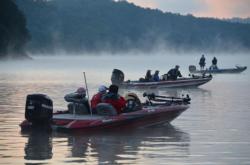 Twenty FLW College Fishing Northern Conference teams will compete for two days with a top-five cut announced after day-two weigh-in. The top-five teams, based on total accumulated weight, will advance to Saturday’s finals. Ultimately the team that lands the heaviest three-day combined stringer will be declared champion.

College teams will take off from Twin Ridge Recreation Area located at State Route 624, Twin Ridge Marina Road in Henry VA., at 7 a.m. each morning. Weigh-ins will be at Walmart located at 976 Commonwealth Boulevard, in Martinsville, Va., beginning at 4 p.m. each day. 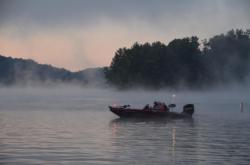 Four regular-season qualifying events were held in each FLW College Fishing conference – Central, Northern, Southeastern, Southern and Western. The top five team finishers in each of the 2012 regular-season events qualified for the conference championship. The top-five team finalists at this week’s tournament will advance to the 2013 National Guard FLW College Fishing National Championship.

College Fishing is free to enter. FLW provides boats and drivers for each competing team along with travel allowances. All participants must be registered, full-time undergraduate students at a four-year college or university and members of a fishing club recognized by their college or university.

In addition to a live weigh-in, college fishing fans also will be treated to the FLW Expo on Thursday and Friday from 2 to 4 p.m. and Saturday from noon to 4 p.m. prior to weigh-ins. The Expo, located at Walmart at 976 Commonwealth Boulevard, in Martinsville, Va., includes Ranger boat simulators, interactive games, activities and giveaways provided by sponsors. Fans can also learn more about the sport of fishing and other outdoor activities.

All activities are free and open to the public. 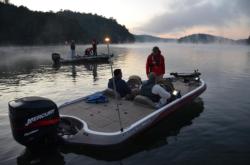 Wind: From the east-northeast at 4-5 mph 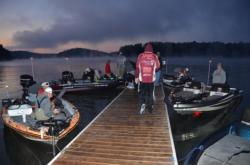