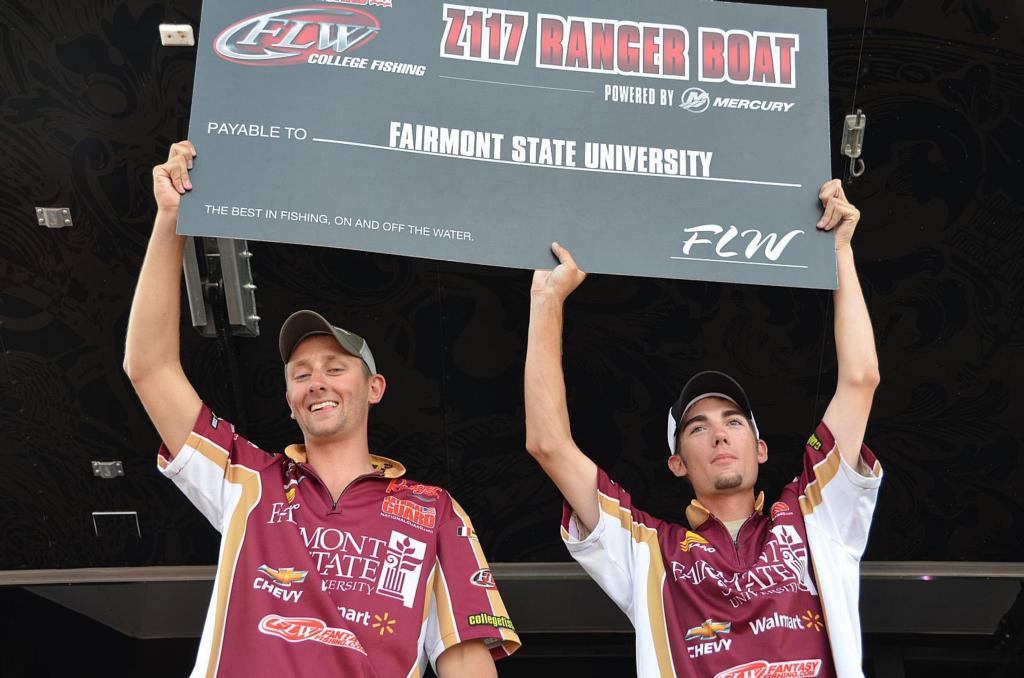 MARTINSVILLE, Va. – Coming into the FLW College Fishing Northern Conference Championship on Philpott Lake, the Fairmont State University team of Ryan Radcliff of Parkersburg, W. Va., and Wil Dieffenbauch of Hundred, W. Va., had argued that it would take a five-fish limit and about 8 pounds each day to have a chance at the title. Well, as it turned out, they were exactly on the mark. Using a total catch of 24 pounds, 12 ounces, Fairmont State avenged a second-place showing last year to net the team’s first-ever conference championship victory. 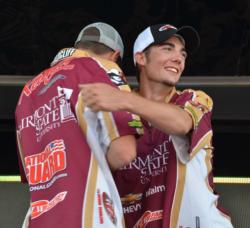 And they couldn’t have been happier.

“It feels amazing. I don’t even know what to do now,” said Dieffenbauch. “After last year, we wanted to win this title badly. Now I’m getting greedy. I want to win a national championship.”

In addition to the coveted tournament title, Fairmont State netted a brand new, fully rigged Ranger Z117 for their bass club as well as an automatic berth in the 2013 FLW College Fishing National Championship.

“It’s just awesome,” said Radcliff. “I started fishing with Wil this year and we really worked well together. He taught me so much and I was able to keep learning like crazy throughout the season. But even a few weeks ago, I honestly would not have dreamed that we’d win this thing. It’s just unreal.”

Although a rules violation by day-two leader Ramapo College disqualified the frontrunner’s day-three weight and gave Fairmont State a little more breathing room than expected, Dieffenbauch and Radcliff hardly backed into victory. For starters, they had to fend off a hard-charging team from SUNY Plattsburgh as well as contend with the fickle bass bite on Philpott Lake.

“This was not an easy lake to fish,” said Dieffenbauch. “We worked for every ounce. There was also a lot of boat traffic today and that hurt us. And we really had a tough morning with the wind. We didn’t even have a fish in the boat until 9 a.m.”

“We really started out struggling,” said Radcliff. “The wind hammered us and pushed the shad down and that really hurt our morning bite. And I had a terrible day. I got hung up a bunch of times and broke a fish off. But Wil kept us alive. I wound up catching one fish at the end of the day, but it was definitely frustrating out there.”

Although the morning bite proved difficult, it didn’t prove lethal to their tournament title hopes.

“We started working long, sloping points in about 30 to 45 feet of water, keying in on small rocky spots and brush piles,” said Dieffenbauch. “And then we started to put some fish in the boat. By 1:30 p.m. we had a limit and then we’re able to start culling fish.” 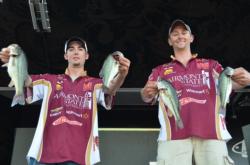 “That last hour really helped,” said Radcliff. “We got on them pretty good at the end.”

The duo used drop-shot equipped with a 4-inch Robo worm in a Morning Dawn color to land a good part of their catch. But their largest fish ultimately came on a 1/2-ounce Sworming Hornet Fish Head Spin with a Yamamoto saltwater swimbait in a blue pearl/silver flake color.

In the end, despite the tough conditions, Fairmont State couldn’t have asked for a better storybook ending.

“It was definitely a lot tougher bite today,” said Dieffenbauch, who was making his fourth straight appearance in a conference championship. “But after what happened today, we really can’t complain.”

Although they began the day in third place, the SUNY Plattsburgh team of Chris Benninger of Grand Island, N.Y., and Richard Lee of Port Kent, N.Y., managed to make a late run a the title, ultimately finishing the conference championship in second place overall. The result was good enough to earn the team $5,000 in winnings as well as qualify Benninger and Lee for next year’s national championship.

“That was one heck of a weigh-in,” said Benninger. “I really don’t know what to say. We decided to gamble today and it really paid off. But it was still tough fishing out there. I’m not really sure I’d want to have to do that all over again.”

“We fought for all of these fish, especially over the last two days,” said Lee. “It was a great tournament for us. It’s just an awesome feeling because we didn’t expect to catch a whole lot after the terrible practice we had. So we’re pretty happy. And we’re going to nationals!”

The team said that it caught the majority of its fish using a weighted wacky rigged worm in a Baby Bass color and a drop-shot equipped with Baby Blue Gills and Robo worms. But while the team made a strong run a the title, missing out on first place by less than 2 pounds, Lee and Benninger acknowledged that it was definitely a long, arduous day of fishing.

“We first decided to fish deep and we managed to pull one keeper off,” said Benninger. “We fished for two more hours with no bites so we picked up and moved. Then we went back to the wacky rigged worm in about 1 to 15 feet of water targeting trees. We caught two fish there but we knew that we needed two more. So we went back to the spot that was holding fish all week. We threw down a drop-shot and caught two fish right off the bat. We wound up culling one more fish, but it was up and down all day.”

Although Lee had landed the lion’s share of fish in Friday’s contest, the roles were reversed in the finals.

“Chris caught pretty much everything today,” Lee said. “I was pretty much just the net man.”

“I couldn’t catch a fish yesterday but wound up catching them all today,” said Benninger. “But without Ricky yesterday, we would have been in big trouble. We wouldn’t be here without him.” 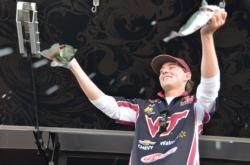 On the first day of competition, Virginia Tech’s Jody White of Shaftsbury, Vt., found himself fishing alone due to the fact that his partner, David Bryant of Covington, Va., was a day late to the tournament as a result of a prior work commitment. However, that day, White didn’t let his team down, finishing the opening round of competition in fourth place. With Bryant back in action on day two, the team managed to maintain fourth-place overall in the standings. Then, with a tournament title on the line, Bryant once again had to depart the team for other work obligations. And in the end, White held steady, boating a 5-pound, 6-ounce limit in the finals to move up to third place overall.

Fishing without a partner for two days was definitely a disadvantage. However, White more than held up his end of the bargain – helming the team to a total, three-day catch of 19 pounds, 10 ounces – good enough to land $3,000 in winnings.

However, it wasn’t easy.

“I started out the day looking for a topwater bite but it didn’t really materialize today. And that’s something I was usually able to count on,” he said. “So I went to my honey hole and used a drop-shot on an old railroad cut, focusing in on pieces of brush in about 12 to 20 feet of water. I only wound up catching four fish and I lost a keeper as well. But fishing by yourself, you only have about half as many chances at fish so overall, I’m pretty happy with how things went.”

In the end, White said his team’s third-place finish and berth in the national championship was well worth the hardship of fishing solo.

“I’m just so excited to be able to fish for a national championship,” said White. “It was a great week.” 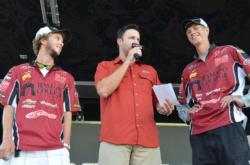 Heading into the finals, the Ramapo College team of Jeffrey Voss of Secaucus, N.J., and Joseph Zapf of Whippany, N.J., was clearly intent on defending its title. As the winners of last year’s event, Ramapo College held the overall lead with 18 pounds, 8 ounces with only one day of competition remaining. As such, the team looked to be in perfect position to repeat. However, unfortunately for them, due to a mental error, the team ultimately had to settle for fourth place and thoughts of what might have been.

Specifically, the team came back with six fish even though “Rule 16” states that teams can’t have more than a five-fish limit in their livewell at any one time. As a result, the team was penalized their entire weigh in today’s competition. But even with a zero for today’s weight, the team still managed to hang on for a fourth-place finish – a tribute to how well the team fished the first two days.

“We had a really good day on the water today but a bad ending off it,” said Voss. “Unfortunately our tournament was cut short by a day. But it was a really good tournament overall. And we’re still going to the national championship.”

“No matter what, we had a great week,” echoed Zapf. “We’re going to the national championship and that’s great. So there are no hard feelings going forward.”

For their efforts, the team took home $3,000 in winnings. 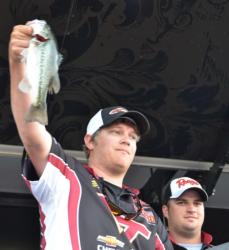 The second Virginia Tech team to qualify for the finals, Andrew Jackson of Lebanon, Va., and Patrick Snellings of Fredericksburg, Va., ultimately finished the event right where they started – in fifth place overall.

“We started off the day in fifth place and we knew that we had nothing to lose,” said Snellings. “We tried to go big early but it didn’t work out. Our thinking was, `Go big or go home.'”

“Today we went out looking for a home run but it wound up being more like a dribbler to third and getting thrown out at first,” joked Jackson.

Knowing that they had already secured a berth in the national championship due to their top-five finish on day two, Snellings and Jackson did what they could to try and steal a tournament title. Unfortunately, it wasn’t meant to be as the team only managed to return to the scales with two fish.

“We wound up fishing areas we really hadn’t fished before,” said Snellings. “We tried jigs, topwaters and Alabama rigs early but we couldn’t really get anything to bite. So I decided to switch up and throw a drop-shot with 4 1/2-inch worm from Power Team Lures and a 3.75-inch worm from the Zipper Worm Company. We wound up catching two keepers by 9:30 a.m. But after that, our bite turned off completely.”

Despite the inability to climb the leaderboard, the duo said they were still happy with the end result, as well as their $3,000 in winnings.

“It was a tough day,” said Snellings. “But honestly, we had nothing to lose. And now we get to go to the national championship.” 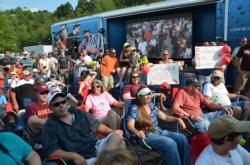 Coverage of the Northern Conference Championship will be broadcast in high-definition (HD) on NBC Sports Network when “FLW” airs Dec. 16 from 1-2 p.m. EST.