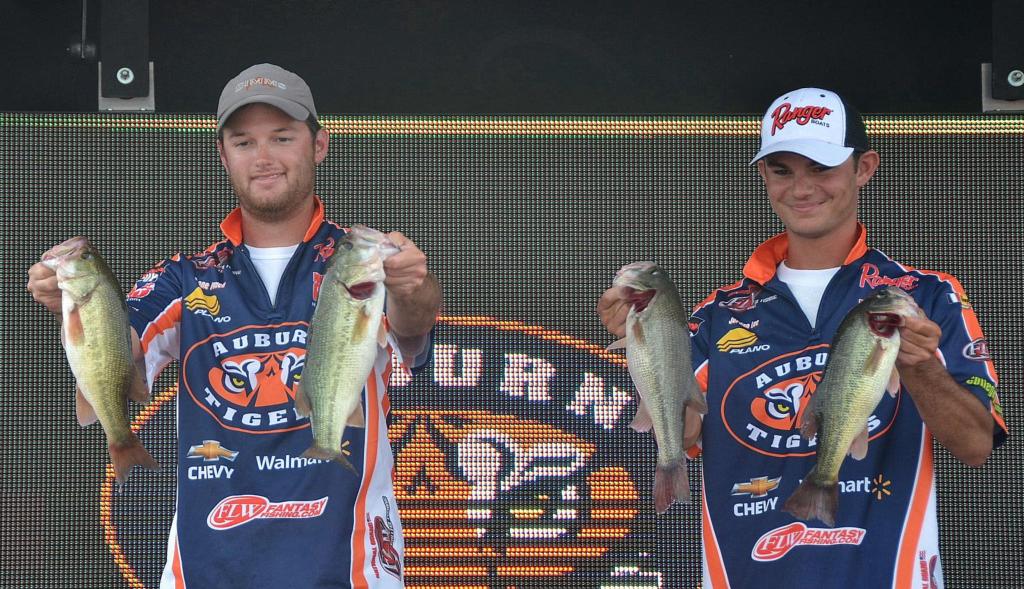 ROCK HILL, S.C. – Auburn University hasn’t had the greatest football season thus far in 2012. But their bass fishing team continues to dominate the way Cam Newton did on the gridiron back in 2010. With another 12-pound limit on stingy Lake Wylie, the Auburn fishing team of Jordan Lee and Shane Powell took a commanding lead at the National Guard FLW College Fishing Southeastern Conference Championship.

“Man it was a fun day again; we’re so blessed,” said Lee. “We caught about 30 or 40 fish today and probably 20 of them were keepers. We pretty much caught them the same way, deep with crankbaits.”

While Lee and Powell wouldn’t reveal the specific crankbait they are using, they said the key to their bite has been long-lining almost the entire spool of their reels. Most of their fish are coming in water 25 to 30 feet deep as the plug grinds off the bottom with the bass positioned approximately 3 feet up.

Occasionally, they will drop a solo swimbait to the bottom and slowly retrieve it. A few of the swimbait 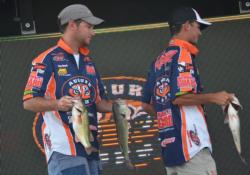 fish have come from water as deep as 40 feet. Their official weight on day two was 12 pounds, 4 ounces, bringing their opening-round total to 24 pounds, 6 ounces.

After seeing other tournament boats on their first two spots, Auburn found success at area No. 3.

“We never even had a bite until our third stop,” said Powell. “Once we found the right spot and we hit it at the right time the fish were biting like crazy. We were catching them two at a time – doubles all over the place. You could just see the bass stacked up on the graph.”

“One spot we hit three times before we could actually get the fish to bite, but we knew they were there because we could see them on the graph so we kept going back.”

While both anglers have considerable collegiate experience, they’ve never won an FLW Conference Championship. But neither have ever had a 4-pound, 9-ounce lead like this.

“We still haven’t caught a true 3-pounder yet,” Lee added. “We’re very confident we’re going to catch them again tomorrow. The way we have been catching them we just need five minutes on the right spot and I’m pretty sure we’ll have a limit. We’ve been catching a lot of fish so I think we have a good shot.”

competing against one another. After a 9-pound, 14-ounce opening day, the Crimson Tide rose to second after catching 9-15 on day two. With a total weight of 19 pounds, 13 ounces, Alabama trails the Tigers by almost 5 pounds.

“We’ve been primarily fishing shallow – throwing some topwaters but mostly skipping docks and flipping lay-downs,” said Dustin Connell. “It’s tough for us because the bite is best from noon to 3 p.m. We only had four fish today at 1:30 p.m. Later in the day you can actually see the fish move into the back of the pocket.”

Connell and his partner, Logan Johnson, are catching approximately 10 to 12 keepers per day. Johnson caught two of the bigger keepers in the last 30 minutes of the day. As a team, they’re confident they can continue their consistency, but don’t know if it will be enough to catch their nemesis to the east.

“The fish are wanting to move into the backs of the creeks,” Connell added. “It is getting better and better every day. Today we ran across a school of four or five fish that were each 3-pounders. And we lost two good fish this afternoon that would have put us around 13 pounds. I definitely think there is 14 or 15 pounds out there.”

“Today we caught more fish, but just not the right size,” said Lehew. “All our fish were just keepers.”

Like Alabama, UNC Charlotte is hitting a lot of docks – mostly in the backs of creeks. Lehew typically targets the furthest spot back in the dock while Waters works the deeper portion. Their jig of choice is from E.R. lures. When they’re between docks, they both swim a jig.

Late in the day today, they ran across a sizeable wolfpack of bass. Waters caught a keeper on his very last cast and Lehew had a 5-pounder and two 3-pounders follow his bait just as he pulled up the trolling motor to head in.

“We know those kind of fish live in Wylie, so we’re not out of it yet. We have to have 16 or 17 pounds tomorrow, but it’s possible.”

UNC Charlotte plans to return to the wolfpack area and start with topwaters – mainly a buzzbait and a Spook. 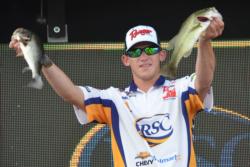 Indian River State College fell from second to fourth after bringing in a 7-pound, 8-ounce limit. The team, consisting of Kyle Monti and Mike Cornell, has a two-day total of 19 pounds, 3 ounces.

“We did the same thing we did yesterday except we sat on the same spot this morning for about three hours instead of about one,” said Monti. “We really wanted to hammer it for all it was worth.” 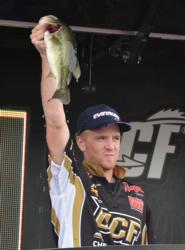 Monti and Cornell are mainly throwing a custom Medlock jig with a chunk around hard pieces of cover such as docks and lay-downs.

Fresh off a victory in the BFL Super Tournament on Lake Wylie, Miles Burghoff has continued his college career by qualifying for the 2013 National Championship. His University of Central Florida team snuck into the top five by just 3 ounces. The outcome was unclear until partner Casey O’Donnell lifted a 3-pound kicker out of his bag as the team’s final fish.

“I was convinced we didn’t have enough to make it,” said Burghoff.