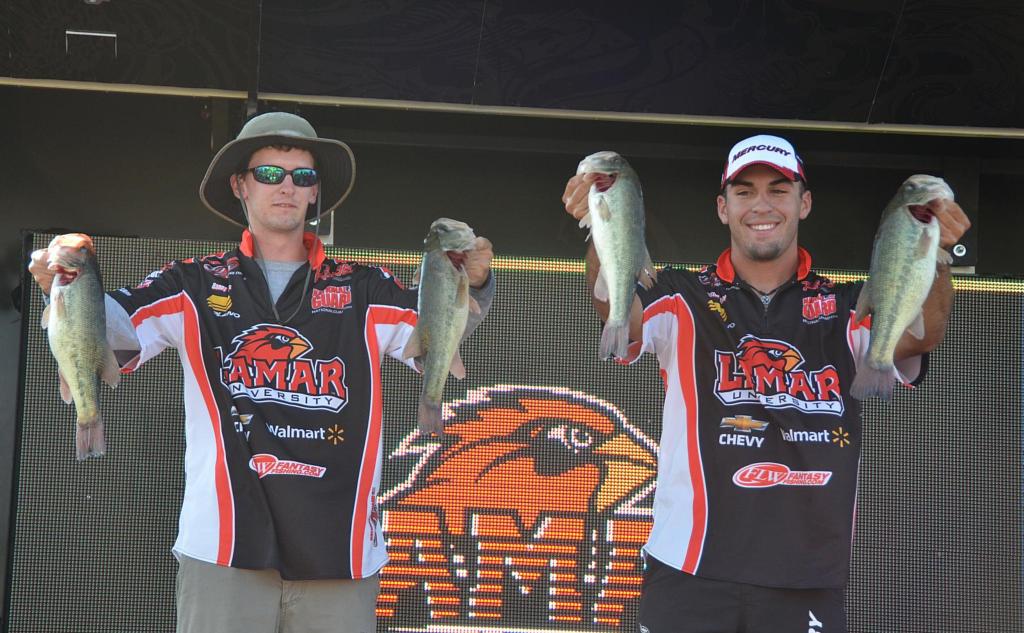 RUSSELLVILLE, Ark. – It became apparent quickly during weigh in that the fishing on Lake Dardanelle is certainly tough right now to kick off the first day of the National Guard FLW College Fishing Southern Conference Championship. When the dust settled, however, the team from Lamar University of Danny Iles and Justin Royal grabbed the early lead.

With twenty teams competing in the event this week, only seven managed to bring a limit to stage. Many teams had no problem catching fish; the bigger issue was catching bass that met the 15-inch minimum length limit on Dardanelle. Lamar University was one team that managed to find a solid limit which weighed 15 pounds, 12 ounces to give them the day-one lead.

Iles and Royal both made it out to Lake Dardanelle before the off-limits went into effect for the tournament. They employed the tactic of splitting up to cover more water and get a better feel of the entire lake. That time spent on the lake helped them develop a plan to start off with today.

“Today went pretty much according to plan,” said Iles. “We were thinking that 14 or 16 pounds today is what we wanted. We didn’t lose any fish, so I’d say we executed pretty well.”

“We are junk fishing, but specific junk fishing,” continued Royal. “There are certain areas that we are focusing on and throwing different baits at. I bet we caught 15 fish today but only nine were keepers. There is one main spot that we are confident we can catch more fish out of.”

“Some of our better places we may hit multiple times throughout the day, it just depends on how things are going,” Iles added. “We have only found a few fish so we have to try and not burn them up.”

The team isn’t too comfortable with their lead based on the quality of fish out there and how the lake is fishing, especially with a front moving in. 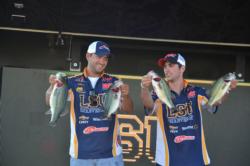 The guys from LSU-Shreveport – Joseph Landry and Gavin Havard – brought 13 pounds, 14 ounces to the scales as part of their five-bass limit to start off the Southern Conference Championship in second place.

Like many of the other teams, LSU-Shreveport spent much of their time in practice looking for areas instead of fishing.

“In practice we spent our time looking, didn’t make many casts and caught only one keeper,” said Landry. “We are around fish though, and we lost one big one today that would have probably put us in the lead.

“Around 11 a.m. the bite pretty much shut off for us today,” Landry stated. “We have three decent places so we tried to find new water, but didn’t find anything good. We did lose one early in the day that was probably a 4-pounder, then went back to that spot later and caught a 4-pounder. That fish helped us a lot.”

Being located in Shreveport on the Red River, the team said that they would much rather fish on Lake Dardanelle. They are having a blast and catching fish. The duo even went on to say that you know you have a problem when you can catch 70 fish, but only six are keepers.

LSU-Shreveport isn’t sure how the weather change will affect their fishing, but they hope to have 10 or 11 pounds tomorrow. The main thing they want to focus on is catching one bass at a time. 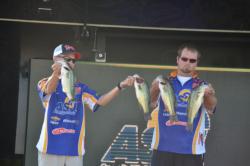 Ethan George and Josh Seale of Angelo State could have had a better start to their week after making the 12 hour drive to Russellville. Despite some issues, they still brought 12 pounds, 8 ounces to the scales.

When they got on the water for yesterday’s practice period, they realized that their trim on their outboard wasn’t working. So, instead of calling it quits to fix it, George and Seale idled close to the ramp to try and locate some fish. After getting off the water they thought they had fixed the problem.

“We found a few areas in practice that were the same pattern all within a mile of the ramp,” said George. “Today, when we put in the water our trim was completely shot, luckily FLW helped get us a boat so we could start fishing.”

Though are not running all over the lake, Angelo State is making the best of the water they are comfortable with.

“We actually had our limit pretty early today,” Seale said. “The water we have is what we have, so we just have to make it work.”

Angelo State noted that in practice the fish were biting all day long, but today it seemed to slow down around 10 a.m.

A Castaic swimbait has been their weapon of choice so far, and they will continue to throw it.

“With the bite we are on and a front moving in, the bite should be pretty good tomorrow,” Seale noted. 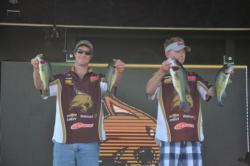 David Cosner and Jared Brown of Texas State University hold down fourth place after bringing a 12-pound, 6-ounce limit to the scales.

Texas State, having never been here before, also took the option of running water in practice to get a feel of the lake. After not catching a keeper in practice, they did find a spot that they felt comfortable to be their starting area.

“We caught a few small keepers off of our starting spot,” said Cosner. “But we knew there wasn’t the potential in that spot that we wanted, so we ran some new water. And around 1:30 p.m. we finally put something together, we found a decent pattern.”

The pattern they found is something they feel they can duplicate across the lake. They have areas that they never even fished today that Cosner and Brown feel confident in. They plan to pull all of their effort into the area they had found late in the first day of competition.

“I just want to say thanks to all of the sponsors for FLW and our club, along with the city of Russellville for making this happen,” Cosner added. 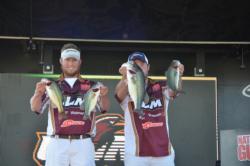 Out of the three teams competing in this tournament for ULM, it is the pair of Paul Clark and Brett Preuett who sits in fifth. Despite weighing only four fish, their decent averaged helped them hit the scales with 11 pounds, 8 ounces.

With their practice not showing anything too promising, they decided to burn some gas and trolling motor battery to catch their fish today. They have a few key baits but are primarily junk fishing.

Clark and Preuett say that they plan to keep covering water tomorrow in hopes of finding quality bites. They also hope that the clouds and possibly rain tomorrow will help convince the bigger fish into biting.

Rounding out the top-10 schools after day one of the Southern Conference Championship:

6th: Brian Eaton and Nick Ladart, of University of Lousiana-Monroe, 11-5

9th: Matthew McClellan and Charlie Brown, of University of Texas-Tyler, 8-3 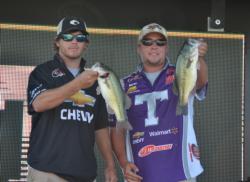 Anglers will take off from Lake Dardanelle State Park located at 100 State Park Drive in Russellville, Ark., at 7 a.m. each morning. Weigh-ins will be at Walmart located at 2409 E. Main St. in Russellville beginning at 4 p.m. each day. Takeoffs and weigh-ins are free and open to the public.