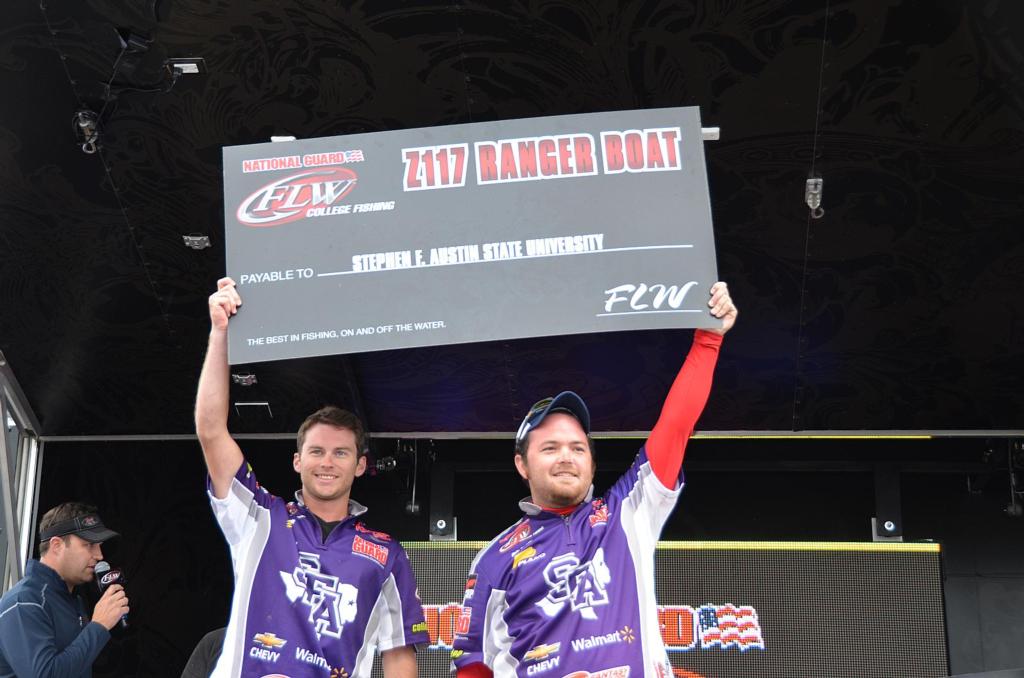 RUSSELLVILLE, Ark. – Cold weather, wind, rain and clouds greeted the top five teams on the final day for the National Guard FLW College Fishing Southern Conference Championship on Lake Dardanelle. With tough conditions and only 1 pound, 11 ounces separating fifth from first, it was left the possibility for anyone to take the title. 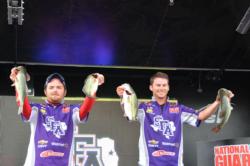 With only two of the teams on the final day bringing five-bass limits to the stage, it was Stephen F. Austin who captured the title after starting the day only 3-ounces behind the leader. On day one Robert `Blaze’ Platt and Kyle Turner brought 11 pounds, 3 ounces to the scales. They backed that up with the largest bag of the tournament on day two – 17-2. Today they hauled in 16-3, giving them a three-day total of 44-8 and a new Ranger Z117 and motor for their club.

“This is awesome,” said Turner a junior in forest and wildlife management. “For SFA to come in here and repeat is awesome.”

“I think we made the guys who won this title for SFA last year proud,” said Blaze. “I really think we wouldn’t be here without those guys, so thank you. It really is a great feeling to bring the title back.”

Both Turner and Blaze had been catching most of their fish this week on a Heddon Super Spook Jr. and a 6th Sense squarebill in citrus shad color. But with the temperatures expected to drop even more for the final day, SFA knew they would have to make a change.

“We made a game plan sitting in the hotel room last night to prepare for a water change and a temperature change,” Turner added. “We were going for a reaction bite. So we tied on a Rat-L-Trap, because that’s what we’d be doing right now back home. It really worked out for us.” 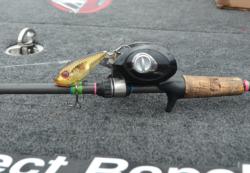 The guys stuck to their main areas they had been fishing previously but decided to rip lipless crankbaits out of the grass to trigger a reaction strike. They noted that they still caught several fish on the Spook Jr. but their better bites came when ripping the cranks out of the grass.

“We never felt satisfied, especially with this group of guys here,” said Blaze a junior in spatial science. “I figured the weights would be lower today and the fishing would be tougher. But when we realized our fish were still hungry, then we knew it could be the same for the other teams.”

SFA focused on a few key banks with around 5 to 10 feet of water. Turner and Blaze threw most of their baits on 16-pound Sunline fluorocarbon. Rat-L-Traps and Strike King Red Eye Shads in gold colors were the ticket to help them land the big bites on the final day.

Both of the guys say that they are very excited to head to the national championship. They can’t wait until the tournament location is announced, then, they say their blood will really be pumping.

University of Louisiana-Monroe climbs to second 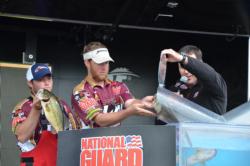 Paul Clark and Brett Preuett of the University of Louisiana-Monroe started the week off with a day-one limit that weighed 11 pounds, 8 ounces to sit in fifth. Day two saw their weight improve as they took an impressive 15-15 to the stage, moving them up to fourth. To wrap up the final day, Clark and Preuett were the only other team to bring in a five-bass limit that hit the scales at 16-3. This gave them a three-day total weight of 43-10 and a check worth $5,000.

Their two primary baits this week were a Strike King Red Eye Shad and a War Eagle spinnerbait. Clark and Preuett fished these baits around several different grass stretches that were in deeper water. 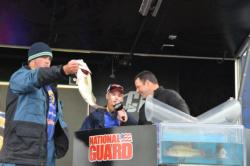 Things didn’t get off to a good start for the Angelo State team of Ethan George and Josh Seale this week. After battling with boat issues in practice that limited their water they could check out, they managed to locate one area that held quality fish.

Despite having a good area that yielded a 16-pound bag on day two, Angelo State came up short today. They weighed four fish for 13 pounds, 5 ounces on the final day bringing their total weight to 41-13.

“We did everything pretty much the same today,” said George. “Josh caught a big one right away which made us feel good. Then with about 15 minutes left and only three keepers in the livewell, I broke off a big one. Once I retied, I caught about a 3-pounder on the next cast. Then it was time to head in, pretty disappointing.”

They worked one main area that was very close to the takeoff area. They threw one bait the entire week – a Castaic swimbait. George finally lost their last Castaic bait today, which they then changed to a Reaction Innovations Skinny Dipper.

Though, they may not have won, Angelo State was just happy to make it to the final day.

“Pretty much the reason we came was to try and make it to the national championship,” George added. “We couldn’t be more happy with how we ended up, especially after the week we had.”

For their efforts this week, Angelo State was awarded $3,000 to their club. 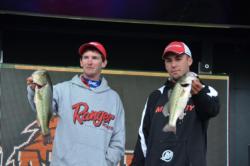 Opting to stay away from the grass this week was Danny Iles and Justin Royal of Lamar University. After leading the tournament on day one, their weights continued to drop as the week went on. Today, they brought in three bass for a weight of 9 pounds, 4 ounces to take home $3,000.

“Today was slow, but fishing was okay,” said Iles. “We wanted to stay away from the grass this week and we thought we had found enough fish to last through this weather, but we just couldn’t get enough bites.”

Throughout the week Lamar rotated between several different soft plastics. The best bait they had was a Strike King ReCon Worm Texas-rigged with a 3/8-ounce bullet weight and a 4/0 hook. Iles also said that the team would throw a Carolina rig and a crankbait depending on how the boat was positioned on the spot.

Small points found in 12 to 15 feet of water were the main focus for Iles and Royal. They fished in backwater areas but concentrated on the deeper water with no grass. 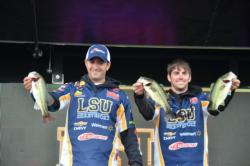 It usually cannot be a good start to your day when you get hailed on as you drive down the lake in the morning. That is exactly what happened to Joseph Landry and Gavin Havard of LSU-Shreveport as they headed up the lake. Later on, they even had to sit in the river channel with their heads down as it hailed on them for around 10 minutes.

“All three of our keepers we caught in a small window,” said Havard. “The sun came for a second and our fish turned on, after that though, they completely shut down.”

“It was really a grind,” added Landry. “We caught probably 20 or 25 keepers but just the three that weighed. The weather is definitely what killed us.”

LSU-Shreveport spent their time around Goose Island. Strike King Red Eye Shads were their weapons over the first two days of competition. But today, they made a change and threw Senkos and spinnerbaits.

The guys wanted to thank all of the sponsors of FLW who helped make this tournament possible, along with the city of Russellville for hosting this event on a great lake.

With only three bass on the final day that weighed 6 pounds, 8 ounces, Landry and Havard had a total limit of 33-5 to bring home a $3,000 check.