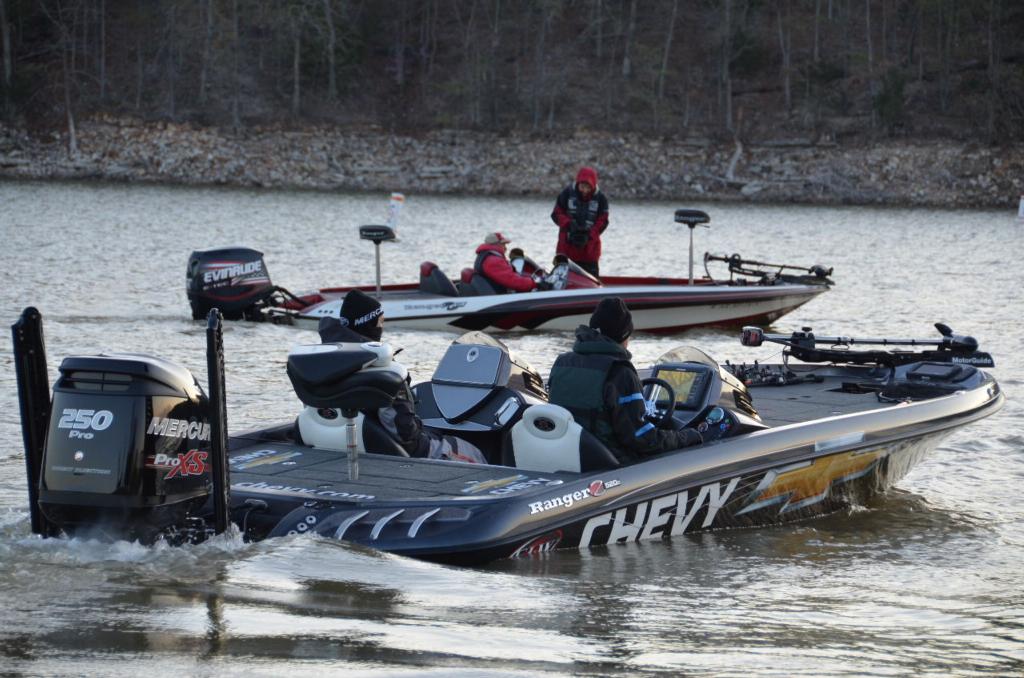 ROGERS, Ark. – Although conditions were far from ideal, the top-25 collegiate teams in the nation departed Prairie Creek marina shortly after 7 a.m. Friday morning with one goal in mind – to survive three days of grueling competition while walking away with the most prestigious title in all of college fishing.

However, it won’t be easy. While the field is undoubted one of the strongest since the inception of FLW College Fishing in 2009, today’s weather conditions are really going to put a strain on the field. Although collegiate anglers were just starting to get accustomed to the nice, seasonal temps that most saw upon their arrival into the northwest Arkansas area a few days prior, a recent cold front that is currently sweeping across the nation has radically changed the dynamics of the competition – at least for today.

“A few days ago it was 80 degrees,” said Indiana University teammate Steven Bressler of Fremont, Ind. “It was gorgeous. But today, obviously the weather is a lot different.” 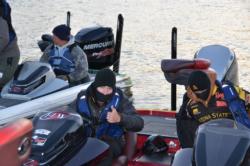 With temps hovering around the 30-degree mark and winds expected to pick up into the low 20-mph range, anglers undoubtedly will have to adapt on the fly. As conventional wisdom goes, you can’t win the tournament on the first day of competition, but you can certainly lose it. And that is particular true of today’s crucial round of tournament action.

“I’m kind of used to these tougher fishing conditions growing up on the Ohio River. For me, this weather is normal” said fellow Indiana University teammate Dustin Vaal of Saint Meinrad, Ind. “But for the California guys and the guys down South, I’m not sure they’re as used to this. And the wind is really going to make things tough for those sight-fishing guys.”

Some recent flooding and water temperatures in the mid- to high-50s could also cause some reevaluation of the field on how to best attack Beaver Lake during today’s competition.

“Right before this front came in, I think the fish were really set up to start bedding,” said Vaal. “But now they’ve backed off a bit. I think you’re going to see those fish holding to the first breaks and first set of docks – anything they can hold on to until the weather changes and they can start to move up to spawn.

And on a day like this, the largemouth bass are going to more affected by this type of weather than (smallmouth and spotted bass),” Vaal continued. “So that could make a difference as well.”

That being said, Vaal and Bressler have a carefully crafted game plan for the next three days.

“Our goal is to catch 11 to 13 pounds a day,” said Vaal. “We’re going to try and get a 5-pound largemouth and then fill out our limit – whether that’s with spotted bass or more largemouths. If we can do that, I’d feel pretty good. But we’re also gong to have to bust one really good limit in the 15-pound range one of these days to win it. For us, it’s going to be all about water depth and weather conditions. Right now there has been some flooding and the water is muddied up in places. But we’ve found some success where the clear water meets the muddy water. And there are plenty of shallow areas that are right next to really steep drop-offs and those areas could be key as well.”

The nice thing about Beaver Lake is that there are plenty of ways to fish it. As such, anglers can usually fish to their strengths on the famed Arkansas waterway. 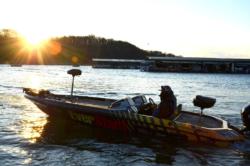 “We’re going to be throwing spinnerbaits, Alabama rigs and jigs,” said Vaal. “We’ll also use a Mojo rig, which is like a Carolina rig only lighter. If the fishing gets tough, we’ll throw some Shaky Heads. And if it really gets tough, you can always rely on a wacky-rigged worm.”

For the Indiana crew, the national championship represents the culmination of years of hard work. And they’d like nothing more than to see it pay off after Sunday’s final weigh-in.

“I’ve made it to the national championship four times now,” said Vaal. “(Bressler) has made it two years. So it’s just an amazing experience for us. I feel like my entire college fishing career couldn’t have gone better for us. It’s more than anything I could have asked for.”

“This is the last time we’ll be fishing together as a team,” said Bressler. “So it’s exciting. We really want to do well.”

Vaal also argued that his college fishing experience has served as sort of a tournament fishing boot camp that will help propel his career down the road.

“FLW College Fishing has been a huge stepping stone for me,” said Vaal. “It’s really going to help my career. I’ve just learned so much.”

But right now, the team is focused on nothing more than winning the 2013 FLW College Fishing National Championship title. And undoubtedly, it will be their most difficult task to date.

“I think this is the toughest national championship field we’ve ever had,” said Vaal. “You’re really going to be seeing the best of the best this week. It should be a fantastic tournament.” 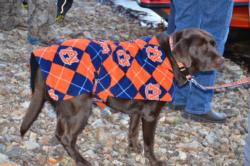 The entire 2013 FLW College Fishing National Championship field will compete for two days with the top-five college teams advancing to the third and final day of competition based on their overall accumulated weight. Teams are permitted to bring as many as five fish to the scales during each weigh-in. After the conclusion of Sunday’s weigh-in, the tournament title will be awarded to the college team that has recorded the most combined weight over all three days of competition.

The national championship awards the top team a $30,000 prize package, including a Ranger Z117 with a 90-horsepower engine and an entry into the 2013 Forrest Wood Cup. The team member fishing as a pro in the Forrest Wood Cup also receives the use of a wrapped Ranger Boat and Chevy tow vehicle.

Daily takeoffs for the national championship will take place at 7 a.m. each morning at Prairie Creek Park, located at 9300 N. Park Road in Rogers, Ark. Weigh-ins will be at 4 p.m. at Walmart, located at 2110 W. Walnut Street in Rogers, Ark.

FLW also will be hosting the College Fishing Expo April 19 to 21. Expo activities include a sports zone, tailgate games, sponsor giveaways and a Ranger boat simulator. The Expo runs from 2 to 4 p.m. on Friday and from noon to 4 p.m. on both Saturday and Sunday. The Expo will take place at Walmart, located at 2110 W. Walnut Street in Rogers, Ark.

The following is the complete list of the 25 college teams vying for this year’s national championship title: 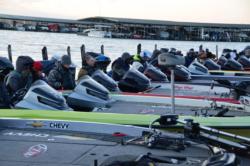 University Of Alabama – Dustin Connell, Clanton, Ala., and Logan Johnson, Jasper, Ala.

Four regular-season events were held in each conference – Central, Northern, Southeastern, Southern and Western. The top five teams in each qualifying event advanced to one of five televised three-day FLW College Fishing Conference Championships. The top five teams from each conference championship advanced to this year’s national championship, and the winner of the national championship will qualify for the 2013 Forrest Wood Cup. The Forrest Wood Cup, the world championship of bass fishing, will be held Aug. 15-18 on the Red River in Shreveport, La., and will offer the collegiate anglers the opportunity to compete for a top award of $500,000.

FLW College Fishing is free to enter and FLW provides boats and drivers for each competing team along with travel allowances. All participants must be registered, full-time undergraduate students at a four-year college or university and be a member of a fishing club recognized by their college or university. 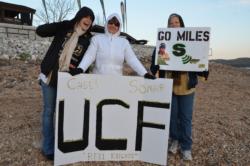 Want to watch the inaugural national championship weigh-in live but can’t make it in person? Then tune into FLW Live on FLWOutdoors.com shortly before 4 p.m. Central time to watch live streaming video and audio of today’s opening-round weigh in.

Coverage of the FLW College Fishing National Championship, hosted by the Rogers Convention and Visitors Bureau, will be broadcast in high-definition (HD) on NBC Sports Network when “FLW” airs June 9 from 11 a.m. to 12 p.m. ET. The Emmy-nominated “FLW” television show is hosted by Jason Harper and is broadcast to more than 564 million households worldwide.

Wind: From the west-northwest from 12-19 mph

Day’s outlook: Mostly sunny with increasing winds throughout the day.