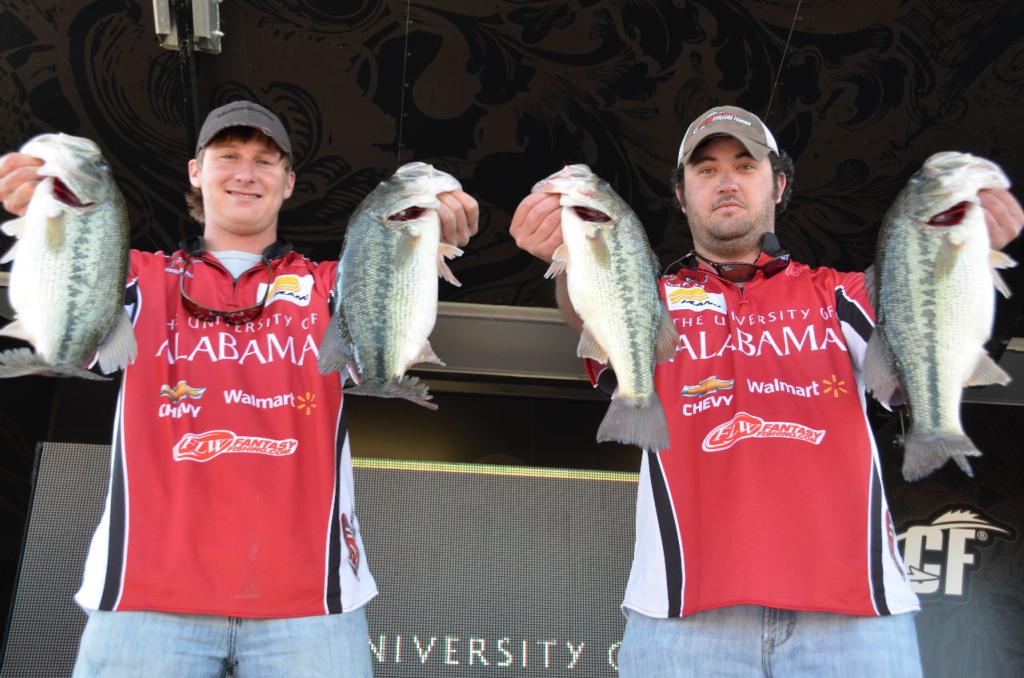 ROGERS, Ark. – Despite the bitter cold and extremely windy conditions that dominated Friday’s competition on Beaver Lake, the 2013 FLW College Fishing National Championship field still managed to put on quite a show – shattering the conventional wisdom that quality weights would difficult to come by. In fact, as it turned out, the championship field fished all day long like it was on a mission to prove that yes, this group of collegiate anglers is the best of the best.

With 16 teams posting weights 10 pounds or greater, 21 teams recording five-fish limits and eight teams producing stringers of at least 13 pounds, the field demonstrated that even during the most brutal conditions, Beaver Lake can still go toe to toe with some of the best waterways in Razorback country.

Leading today’s charge was the University of Alabama team comprised of Dustin Connell of Clanton, Ala., and Logan Johnson of Jasper, Ala. Together the duo recorded an eye-popping catch of 18 pounds, 8 ounces to vault atop the leaderboard heading into Saturday’s competition.

“It feels really good to be in the lead,” said Johnson. “It was an awesome day today. I couldn’t have written it any better. Hopefully we can do it again tomorrow.”

“On the fifth cast, my partner hooked up with a big one and I said, `This could be our day,'” said Connell. “As it turned out, I was right. Today was just a lot of fun.”

Team Crimson Tide said it attacked Beaver Lake with a variety of baits and approaches – and it clearly paid off.

Not surprisingly, due to their success, the team said it wasn’t about to change things up too much tomorrow.

“I feel pretty good where we’re at right now,” said Johnson. “We have some good momentum heading into Saturday and I think we’re pretty much going to go with the same game plan.” 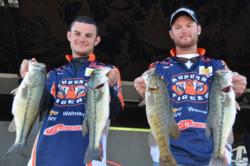 Perennial bass-fishing powerhouse Auburn University managed once again to make some noise at the national championship. Bolstered by a day-one catch of 16 pounds, the duo of Jordan Lee of Cullman, Ala., and Shane Powell of Dothan, Ala., netted second place overall.

“We had a blessed day today. We’re stoked. We’re happy,” said Lee. “But honestly, we just went fishing. Ninety percent of the areas we fished today we’d never even seen before. We wound up covering a lot of water and we had our limit by 8 a.m. And we probably caught anywhere from 15 to 25 keepers. So overall, it was a really good day for us. We really caught them good.”

“We went to our first spot this morning but it was so cold we really didn’t expect to catch anything,” said Powell. “But they were biting right away. That’s when we knew it was going to be a good day. We wound up catching fish all day.”

Although some teams clearly took advantage of the Alabama rig in today’s competition, the Tigers said that was about the only bait that didn’t produce.

“We used four or five baits all day but didn’t weigh in any of our fish on the A-rig,” said Powell. “We also only had about six hours of practice time. So after we caught our limit, we spent a lot of day practicing for tomorrow.”

“We wound up throwing a lot of spinnerbaits, crankbaits and jigs,” added Lee. “But water clarity was also pretty important. And we pretty much relied on a one-mile stretch to catch most of our fish all day.”

Although Lee and Powell targeted specific areas holding rock and wood, the team said it wasn’t averse to making changes on day two.

“We went up the lake today but we’ll probably go down the lake some tomorrow,” said Lee. “But overall, we like our game plan.” 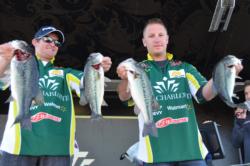 Bolstered by a total catch of 15 pounds, 10 ounces, the University of North Carolina-Charlotte team comprised of Shane Lehew of Charlotte, N.C., and Adam Waters of Denver, N.C., took third place overall in the standings.

“Yesterday we had a decent limit in practice of about 9 pounds and we thought we could do it again,” said Lehew. “So to finish today in third, we’re pretty happy about that. We didn’t get many bites, but the ones we did were quality.”

“We just ran around a lot and fished as much as we could,” said Waters. “We’re kind of just went up and down the bank all day fishing shallow.”

The team said one of their key baits was a homemade umbrella rig.

“I designed this umbrella rig that I call the Nasty 9 rig and it worked pretty well today,” said Lehew. “We caught some fish on a jig as well but we caught most of our weight on that rig. We wound up catching fish in the backs of pockets and some mouths (of the river). And we’re targeting rock and wood mostly.”

All in all, it wasn’t a bad day for the North Carolina duo.

“We didn’t get a lot of bites today, maybe seven or eight, but they were good quality,” said Lehew. “I’ll take it for right now. And if we can get the same quality of fish tomorrow, I’ll be happy.” 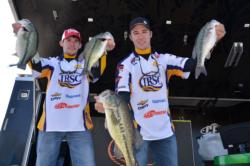 While most bass-fishing fans probably have never heard of Indian River State College, Kyle Monti and Mike Cornell, both of Okeechobee, Fla., have done everything possible to ensure that people won’t forget the name of their college by the time this tournament is over. Using a total catch of 14 pounds, 4 ounces, the duo found itself standing all alone in fourth place with a fantastic chance of fishing on the final day of the national championship.

“Both Mike and I have been fishing for a long time; and right now we feel like we can compete with anybody,” said Monti. “Beaver Lake is a lake that is really up and down but today, we managed to do pretty well. So we’re happy.”

While many teams struggled in practice, that was not the case for Indian River State College.

“Actually, we had a pretty good practice,” said Cornell. “And as it turned out, today wasn’t as tough as I thought it might be. Basically, we had five fish in the boat in the first 10 minutes. So we feel pretty good about today. And hopefully we can do it again tomorrow.” 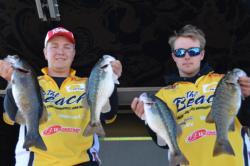 The California State University-Long Beach team of Justin Gangel of Valley Center, Calif., and Alex Cox of Long Beach, Calif., managed to parlay a total catch of 13 pounds, 6 ounces into a top-five finish in today’s competition.

“I came out here a few weeks ago to practice and luckily our fish didn’t move,” said Gangel. “But overall, this was kind of a bad day for us. In practice two weeks ago, we’re catching 19 pounds a day. And if the weather changes a bit, I think we can do it again. Right now, we know we can catch 10 or 11 pounds in the first 30 minutes so it’s just a question of being able to get those bigger bites the rest of the day.”

So, what conditions are they looking for?

“As soon as the clouds roll in and it gets nasty, that’s when our bite really picks up,” said Gangel. “And if that happens, I think we’ll be in really good shape.”

Rounding out the top-10 teams on day one: 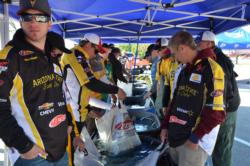 The entire 2013 FLW College Fishing National Championship field will compete for two days with the top-five college teams advancing to the third and final day of competition based on their overall accumulated weight. Teams are permitted to bring as many as five fish to the scales during each weigh-in. After the conclusion of Sunday’s weigh-in, the tournament title will be awarded to the college team that has recorded the most combined weight over all three days of competition.

The national championship awards the top team a $30,000 prize package, including a Ranger Z117 with a 90-horsepower engine and an entry into the 2013 Forrest Wood Cup. The team member fishing as a pro in the Forrest Wood Cup also receives the use of a wrapped Ranger Boat and Chevy tow vehicle. 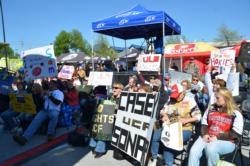 Daily takeoffs for the national championship will take place at 7 a.m. each morning at Prairie Creek Park, located at 9300 N. Park Road in Rogers, Ark. Weigh-ins will be at 4 p.m. at Walmart, located at 2110 W. Walnut Street in Rogers, Ark.

FLW also will be hosting the College Fishing Expo April 19 to 21. Expo activities include a sports zone, tailgate games, sponsor giveaways and a Ranger boat simulator. The Expo runs from 2 to 4 p.m. on Friday and from noon to 4 p.m. on both Saturday and Sunday. The Expo will take place at Walmart, located at 2110 W. Walnut Street in Rogers, Ark.