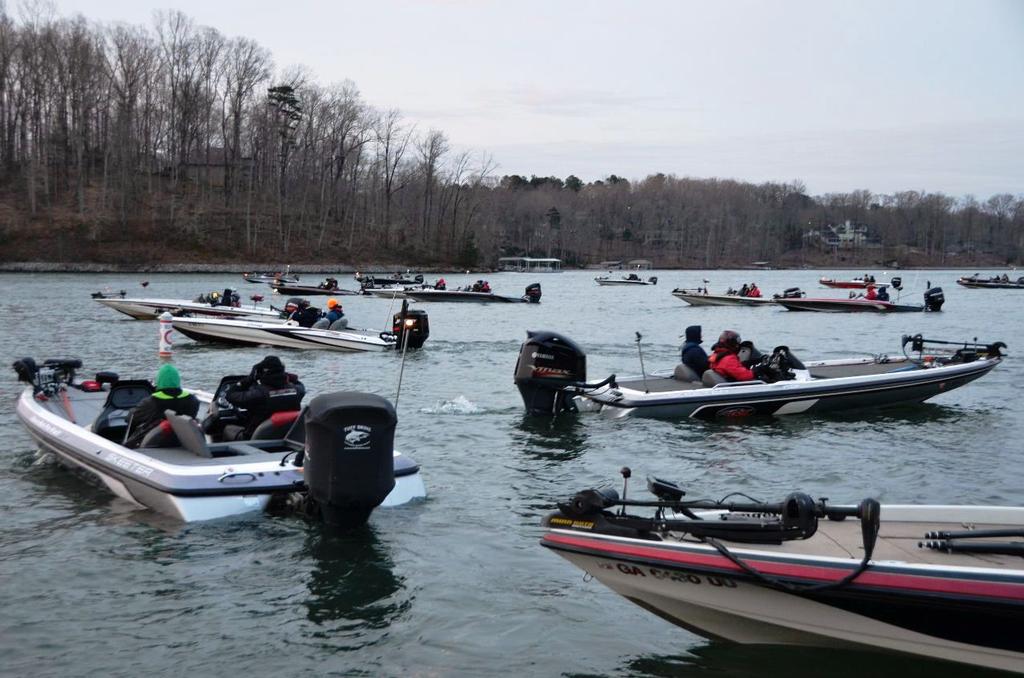 SENECA, S.C. – It wasn’t exactly the conditions that the 2014 FLW College Fishing National Championship field had hoped for. With blustery winds, cloudy skies and frigid conditions serving as backdrop to Thursday’s opening round of competition, the top 49 college teams in the nation set out onto the open waters of Lake Keowee bundled from head to toe in search of one of the most difficult titles to obtain in all of college bass fishing. As if the competition wasn’t already stiff enough and the task as difficult as it comes, Mother Nature made sure to add another layer of difficulty at the feet of the already formidable field. 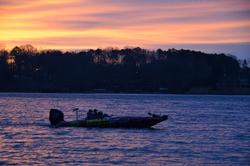 With temperatures barely hovering over the freezing mark, anglers made their way past South Cove County Park marina shortly after 7 a.m. in an effort to get a leg up on the competition and put themselves in a strong position to contend for the most elite title in all of college bass fishing.

“It’s a humbling experience,” said Auburn University teammate Garrett Roberts of Cullman, Ala. “Auburn has been to the championship every year since FLW College Fishing started. So it’s nice to be able to carry on that tradition.”

“It’s great to be here,” added Roberts’ teammate Timmy Ward. “But you want to have a good performance.”

The magnitude of the event was not lost on Auburn’s rivals either.

“This was our ultimate goal,” said Cody Sieben of Murray State of qualifying for the championship. “So to be here is a really good feeling, that’s for sure.”

While anglers know how experienced, versatile and skilled the championship field is, today’s focus undoubtedly will be on Lake Keowee itself. Approximately 26 miles in length, 3 miles wide and sporting an average depth of 54 feet, Lake Keowee is a deep, clear lake with nearly 300 miles of shoreline. With virtually no standing timber, very little available cover and almost no structure, anglers undoubtedly will be challenged this week to locate their quarry. However, Lake Keowee does house healthy populations of both largemouth and spotted bass – species which should both come into play during the three-day contest. 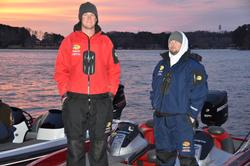 “There is hardly any wood cover here so you’re mostly going to be fishing drop-offs and bottom contours,” said Roberts. “I think our goal is to get a limit of spots early and then go hunting for largemouth later in the day. We’ve been up here two different weekends for practice and we have a little bit of a deep-water pattern going. So that’s probably going to be our best approach. But we’re really going to have to grind it out.”

For many anglers, the key this week will be sticking to what they do best.

“There really is no structure on this lake. If you want to fish deep, there is some offshore stuff. If you do want to fish shallow, you’re going to be looking for flats. But for us, it’s all about locating those bait fish,” said Sieben. “It’s really important to fish how you’re confident fishing. We’re going to fish to our strengths, go out there and have fun.”

Although spring on Lake Keowee should give anglers plenty of different options as far as bait and technique is concerned, that doesn’t mean that the fishing will be easy.

“During this time of year you can do almost anything you want,” added Dan Schult, Sieben’s teammate. “But we got there about a week before to practice and we struggled. So yesterday we kind of just went out there and looked around a lot.” 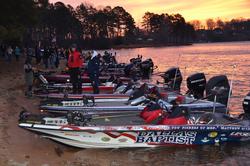 While the field will be employing a host of different tactics this week on Lake Keowee, there does appear to be a consensus on what it will take to advance to the finals.

“Personally I think it’s going to take 12 to 13 pounds a day to get into the finals and have a shot at winning the title,” said Roberts.

“We’re going to need 12 pounds a day to make it to the finals,” echoed Schult.

While it’s still very early in the competition, anglers couldn’t help but imagine what it would be like to hoist the tournament trophy and receive the coveted automatic invite to the 2014 Forrest Wood Cup – one of the most prestigious titles in all of professional tournament bass fishing.

“Every since we started this we talked about what it would be like to fish in the Forrest Wood Cup,” said Ward. “For us, it’d really be magical to fish on the final day.”

“To win the college national championship would be a dream come true,” said Sieben. “When I was a senior in high school I watched the College Fishing National Championship on television and I said, `That’s where I want to be.’ I want to walk across that stage with the trophy in our hands. If we could accomplish that, it would be huge. It would be a life-changing event.”

In that regard, there is little doubt. 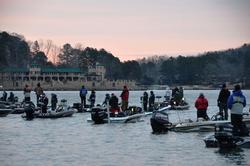 The entire 2014 FLW College Fishing National Championship field will compete for two days with the top-10 college teams advancing to the third and final day of competition based on their overall accumulated weight. Teams are permitted to bring as many as five fish to the scales during each weigh-in. After the conclusion of Saturday’s weigh-in, the tournament title will be awarded to the college team that has recorded the most combined weight over all three days of competition.

The winning team at the 2014 FLW College Fishing National Championship will receive a brand new, fully rigged Ranger Z117 with a 90-horsepower engine and an entry into the 2014 Forrest Wood Cup. The team member fishing as a pro in the Forrest Wood Cup also receives the use of a wrapped Ranger boat and Chevy tow vehicle. The Forrest Wood Cup, the world championship of bass fishing, hosted by the Capital City Lake Murray Country Regional Tourism Board, will be held Aug. 14-17 on Lake Murray in Columbia, S.C., and will offer the collegiate anglers the opportunity to compete for a top award of $500,000.

* (Editor’s note: The UNC Charlotte team will not be fishing in the championship due to a scheduling conflict. In addition, Sacramento State team member Kyle Derbish won’t be attending but partner, Thomas Kanemoto will be competing individually. The Georgia Southern team of Dean Mullett and Dalton Anderson also will be down to one member as Anderson will be unable to attend the event.) 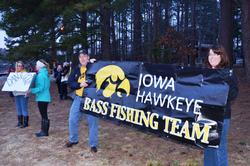 Want to watch the inaugural national championship weigh-in live but can’t make it in person? Then tune into FLW Live on FLWOutdoors.com shortly before 3 p.m. Eastern time to watch live streaming video and audio of today’s opening-round weigh in.

Coverage of the 2014 FLW College Fishing National Championship, will be broadcast in high-definition (HD) on NBC Sports Network when “FLW” airs May 31 from 11 a.m. to 12 p.m. ET. The Emmy-nominated “FLW” television show is hosted by Jason Harper and is broadcast to more than 564 million households worldwide, making it the most widely distributed weekly outdoors-sports television show in the world.

Wind: From the east-northeast from 15-18 mph

Day’s outlook: Mostly cloudy with increasing winds throughout the day.

Lehew stakes his future on the Tour