The Potomac River was the site of the 2014 FLW College Fishing Northern Conference Invitational Oct. 11-12, and like always on the Potomac, the tides and grass were the dominant factors. As evidenced in the top three patterns, the most successful teams understood how to adjust their strategies based on tidal movements and the effect the tide has on bass positioning within the abundant grass beds of the big river. 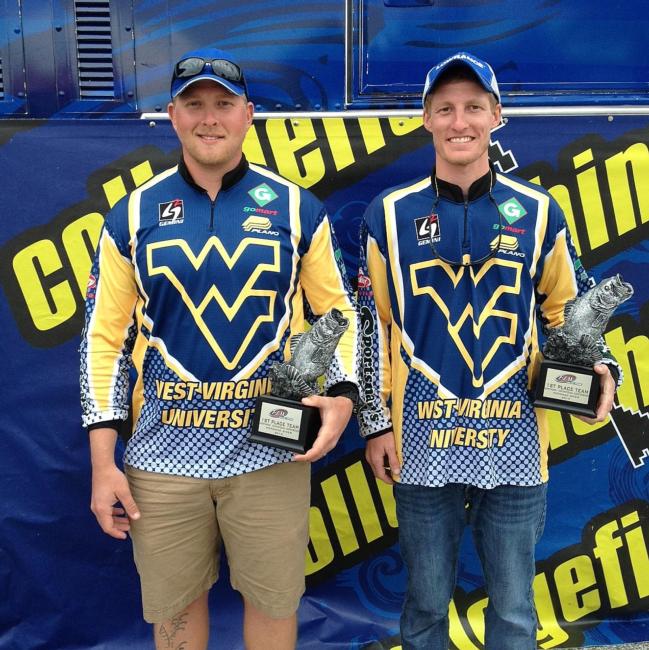 The West Virginia University team of Matthew Gibson of Morgantown, W.Va., and Edward Rude III of Falling Waters, W.Va., relied on years of Potomac experience to shorten the learning curve going into the event.

“Ed is very familiar with the Potomac, and I have fished it as well,” says Gibson. “During practice we knew right where to start, and we found the good area right away.”

The “good area” featured an abundance of crawfish scurrying through scattered grass.

“There were crawdads everywhere; you could just see them all over in the grass,” Gibson adds. “We picked one up to see what color it was and saw that they were a dark brown color.”

With that in mind, they began experimenting with baits until they settled on a Mann’s Baby 1-Minus shallow-diving crankbait in a dark brown or dark orange color.

The winning spot was in Pohick Bay and was about the size of a football field. It featured an island surrounded by scattered clumps of grass and lily pads, adjacent to a creek channel. They moved throughout the area depending on the tide.

“When the water was up the fish would push up toward the island, and when it was low, they would move away from the lily pads and into the creek channel,” says Gibson.

Gibson and Rude spent the morning hours in Belmont Bay on day one, waiting out the right tidal window on their honeyhole. They caught eight keepers on a drop-shot with a Roboworm in the orange crusher color, but ended up culling all of those fish later in the day on the crankbait after moving into the Pohick area.

“The fish wouldn’t eat anything else but a crankbait in those colors,” Gibson says of the bass in Pohick. “A big key was that we were using a regular medium-heavy-action rod instead of a crankbait rod [with a more moderate bend]. You had to have a heavier rod to get them out of the grass once they were hooked.”

The team used both G. Loomis IMX and GLX rods with 15-pound-test Seaguar fluorocarbon to fish their crankbaits across and through the tops of the grass stalks. Gibson and Rude ended the first day in the lead with 16 pounds, 7 ounces.

On the second day, the Mountaineers committed to Pohick Bay and spent the duration there, culling to a 17-pound, 11-ounce limit for a dominating winning margin of 6 pounds. This Invitational win is the second in as many seasons for Gibson and Rude, who won the 2013 contest on the Chesapeake Bay.

Justin Witten and Will Bowling 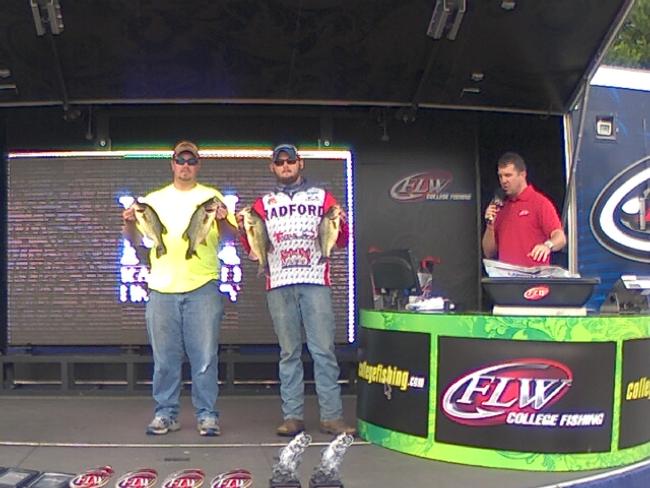 The Radford University team of Justin Witten of Radford, Va., and Will Bowling of Fincastle, Va., relied on finesse tactics in a power-fishing locale to finish in second on the Potomac.

“We were using a drop-shot rig with really light line, and everyone who fishes that grassy area flips and pitches with a creature bait,” says Witten. “We told some people about it afterward, and they couldn’t believe we were doing that there.”

The unconventional move to fish 8-pound-test line in thick grass proved to be the difference as Radford easily caught its fish the first day.

“It was really rough water and took us an hour to get to our spot in Mockley Creek, but once we got there we caught five by 9 o’clock and left to save the fish for the next day,” says Witten.

Radford ended the day with 13 pounds, 15 ounces, which was good enough for third place.

Knowing they had a chance, Witten and Bowling decided to spend the entirety of the second day on their prime location, fishing the thick grass with a drop-shot. The second day proved to be more challenging.

“It was much slower, but we still ended up catching about 10 keepers,” recalls Witten. “Later on we switched to fishing a frog over the grass and caught a few.”

The combination of finesse and frog tactics helped Radford turn in a 14-pound, 3-ounce bag to slide up one position into second place for the tournament. 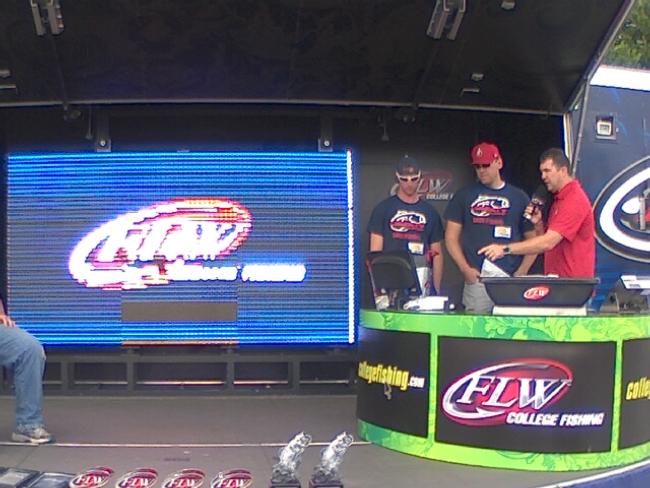 The Liberty University team of Travis Rulle of Huntersville, N.C., and Caleb Eppler of Sachse, Texas, had never seen the Potomac River before arriving in town to prep for the Invitational tournament. Rulle and Eppler spent two days of practice familiarizing themselves with the sprawling river.

They figured out that the fish were positioned between hard grass-line edges and the bank.

“It had to be a cleared-out spot for what we were doing, and we just looked for areas that had that combination and fished until we could trigger a reaction,” says Eppler.

The team primarily used fast-moving Z-Man Original ChatterBaits along the bare spots between the grass and the shoreline in small backwaters off the main river.

A tip learned from Walmart FLW Tour pro Scott Martin in a video prior to the event proved to be helpful in fishing the ChatterBait.

“We switched the trailer to a craw instead of the standard one that comes with it,” says Eppler. “I saw that in a video, and it seemed to have a much better action.”

Water-clarity changes due to fluctuating tides also influenced the bite for Liberty.

“The low water was really the best bite for us, and there wasn’t really a good period of low tide during this event,” says Eppler. “When it was lower, the water was much clearer, and we seemed to catch more fish than when it was higher and muddy.”

As one of only four teams to land back-to-back limits, Liberty secured third place with a two-day total of 27 pounds, 1 ounce.