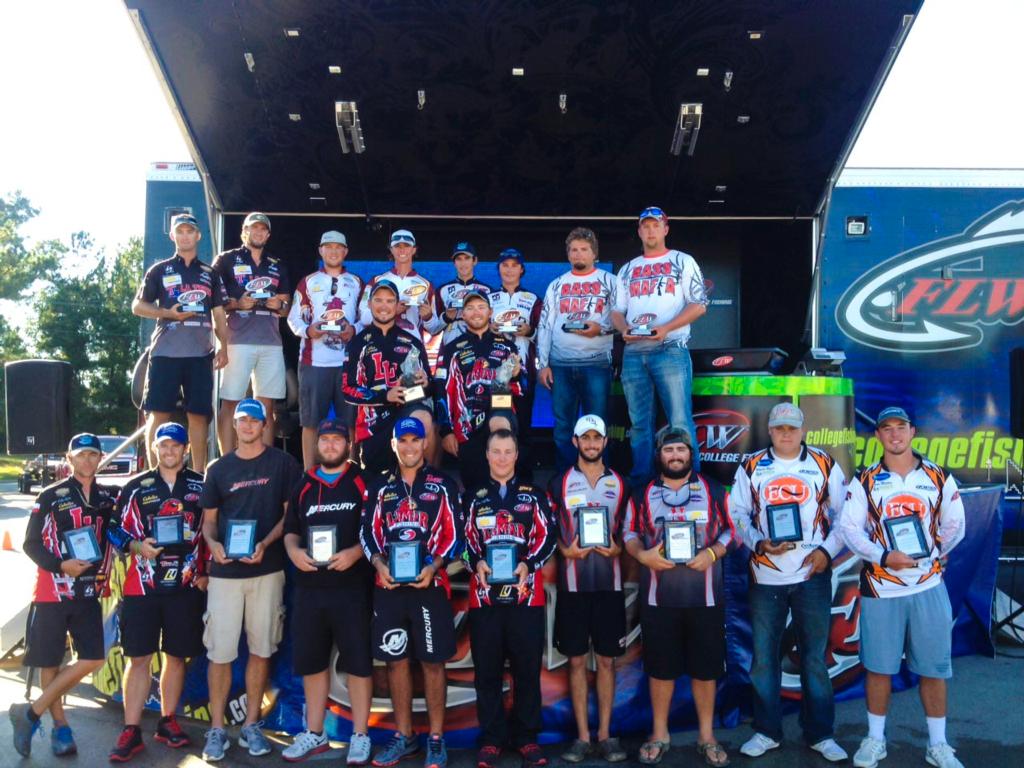 The FLW College Fishing Southern Conference Invitational at Sam Rayburn Reservoir Oct. 25-26 was a close one with first, second and third place decided by barely more than a pound of Texas bass. The top teams found similar patterns and game plans in Rayburn’s shallow grass, and each committed to a small area for the entirety of the event.

Lamar University made a huge comeback for the win at Sam Rayburn. Going into the second day, Brandon Simoneaux of Bridge City, Texas, and Josh Bowie of Port Neches, Texas, were in 15th place with 10 pounds, 10 ounces (the last to make the cut). They vaulted all the way to the top on the strength of an 18-pound 11-ounce bag on the final day.

Simoneaux and Bowie relied on local experience to narrow their focus in pre-fish by excluding deep water. Even with a subpar first day, they committed to the same area again on the second day because they knew they were around winning fish, having made the trip to Rayburn every weekend for a month before the tournament to prepare. They found the winning spot in the lower end of the lake.

“We knew it was going to be tough this time of year and also that the deep fish would desert us because they are just out there chasing shad and can move any time,” says Bowie. “We decided to stay shallow. Our area was basically a big flat with three creek channels that ran through the grass and created edges in the hydrilla.”

The creek channels were devoid of grass, which allowed Lamar to position the boat to fish the edges of the matted hydrilla.

“It was big enough [the channel] that we could go in and fish one grass edge and turn around and come out and fish the other side,” Bowie says. “The fish would be 2 to 3 feet back into the grass, and the way the creek channels were set up, we could fish that defined edge the whole time.” 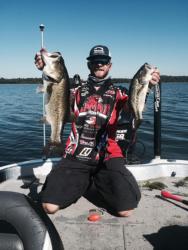 The Lamar team made a key change on the second day: replacing a Reaction Innovations Sweet Beaver rigged with a 1 1/4-ounce tungsten weight and punch skirt with a 1 1/4-ounce Stanley jig and Strike King Rage Twin Tail Menace Grub trailer.

“The jig just fell differently, and we were able to get a different presentation and fish it slower on the bottom,” Bowie explains. “The Menace Grub had a better action than the Sweet Beaver and matched the bluegills in the area.”

If there were bluegills visible swimming along the grass edges, the team would get bit, so it was important to match the hatch.

“The color we were using on our jig skirts and trailers was a sprayed grass or candy craw color and matched the bluegill perfectly,” Bowie adds.

The Louisiana Tech University team drew upon experience at similar lakes for its runner-up finish at Rayburn. The game plan was to fish shallow grass, and the Bulldogs stuck with it for the duration.

Matthew Loetscher, a recent graduate from Many, La., has been spending his time guiding on Toledo Bend Reservoir, a lake that fishes similar to Sam Rayburn.

“It [Rayburn] is set up the same as Toledo Bend, so we knew what to look for,” Loetscher says. “I spent a full week practicing and realized that the shallow grass flats were going to be the key. We caught every single one of our fish on a Stanley Top Toad in a bream color.”

The team focused on shallow grass that had deep-water access.

“We were fishing isolated peppergrass instead of hydrilla because the hydrilla was so thick and there was just so much of it, it was hard to locate the bass in it,” adds Loetscher.

The key area was located in Ayish Bayou. Loetscher and Boudreaux, both of Doyline, La., keyed on peppergrass in about 4 feet of water that was close to a 15- to 20-foot-deep channel.

“We decided to commit to the frog, and once the sun came up the fishing got really good,” recalls Loetscher. “We had close to 20 keepers on the first day and eight on the second day.

After catching 18 pounds, 9 ounces on day one the anglers sat in second place, and they were able to hold on to the runner-up position with 10 pounds, 10 ounces on the final day.

Josh Worth and Kennedy Kinkade 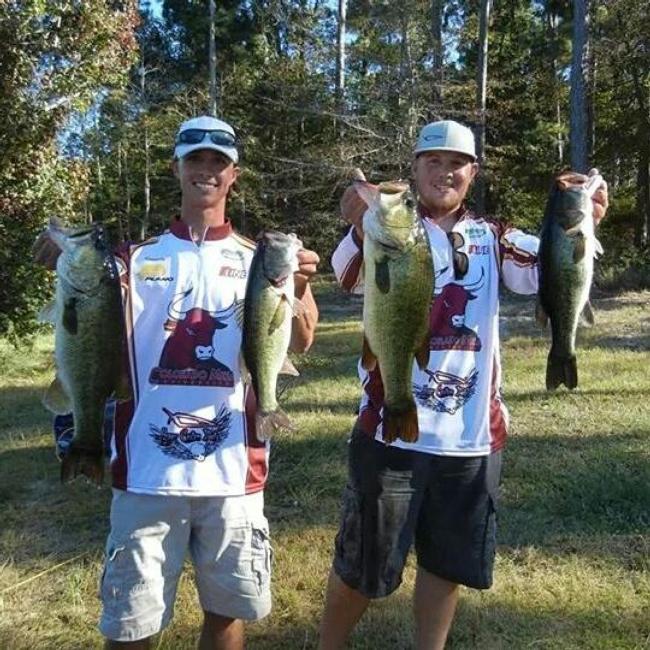 It was a long road to Sam Rayburn for the Colorado Mesa University team of Josh Worth and Kennedy Kinkade of Grand Junction, Colo. The anglers traveled more than 1,200 miles one way to get to the famed Texas lake.

Despite the distance, they were able to make a pre-practice trip a couple weeks before the event. So when they arrived at Sam Rayburn for the tournament, the Colorado Mesa anglers practiced for one day and spent much of it just checking out the key area they had previously found.

“I was worried that the grass would have changed or that the shad would be gone after two weeks,” says Kinkade.

Thankfully, they found things much as they had left them, allowing Kinkade and Worth to spend the entire tournament on a grassy point.

“It was basically one weedbed, and we could catch smaller fish in the shallower water where the hydrilla was thicker, but the bigger ones were holding in deeper water – 10 to 12 feet deep – where the grass was much more sparse and had different grass growing with the hydrilla.”

Colorado jumped to an early lead on day one with 21 pounds, 5 ounces. The team spent both days in one 200-yard section and went on the inside and outside of the grass mat throughout the day flipping a Pepper Custom Baits Pepper Punch rig. The rig is comprised of a tungsten weight with a punch skirt attached. A soft-plastic stick bait was added as a trailer.

The biggest factor for success besides the grassy mix and bait was the wind.

“At around 11 on the first day the wind picked up and they started biting, but it didn’t start getting windy until around 1 on the second day, so we had less time during the prime conditions,” says Kinkade. “We ended up having the same quality bites on the second day, we just didn’t get them in.”

Due to the lack of wind in the morning, Colorado Mesa was unable to fill its limit, weighing four fish for 6 pounds, 13 ounces. The drop-off bumped the team out of the top spot and into third.