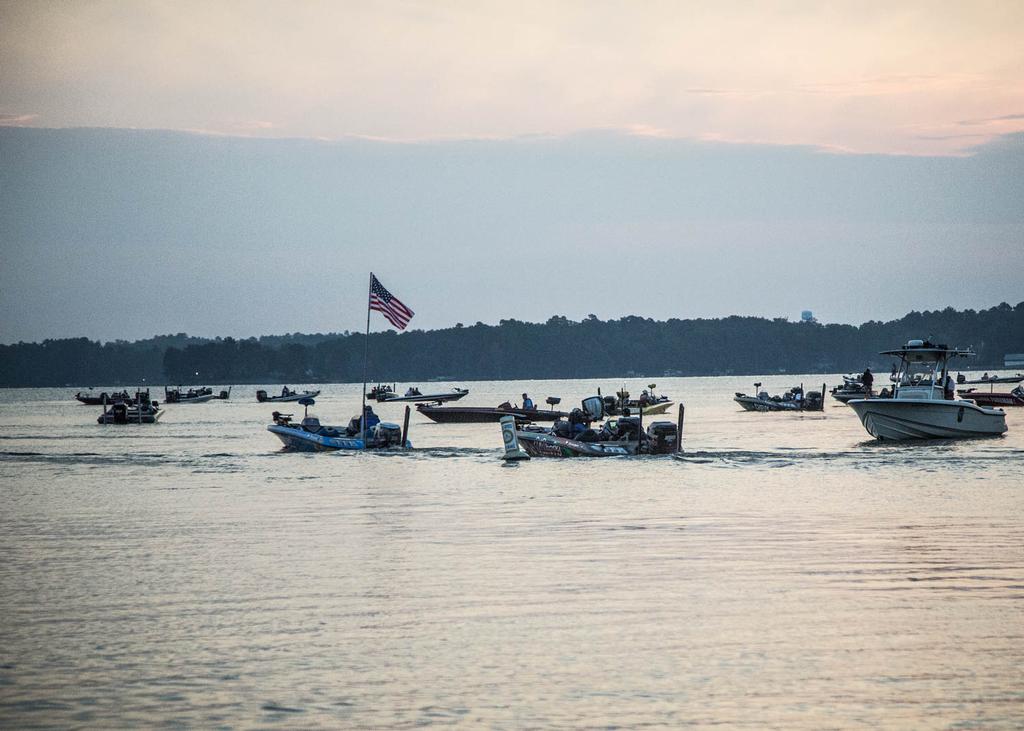 COLUMBIA, S.C. – Anthony Gagliardi won the Forrest Wood Cup on Lake Murray last August with a combination of patterns that included fishing soft-plastic jerkbaits and topwaters for schooling bass. A variation of that theme is likely to work this week when the 50 teams that qualified for the FLW College Fishing National Championship convene on Murray to contest the 2015 title. Hosted by Capital City/Lake Murray Country, the tournament runs from Thursday through Saturday out of Dreher Shoals Dam and pits the top 10 squads from each of the five college conferences against each other. Thursday and Friday weigh-ins are set for 5 p.m. ET at Carolina Stadium, home of the University of South Carolina Gamecocks baseball team, with the final weigh-in taking place there at 4 p.m. ET Saturday.

Though bass won’t be shadowing wandering blueback herring in the open waters of the lake as they did last summer when Gagliardi won, they’re likely to be taking advantage of the annual herring spawn in the shallows. Much depends on the weather and the water temperature, as bass might be distracted by their own spawn. Assuming most of them will be postspawn and hungry, however, spawning herring will garner most of their attention.

“The blueback herring spawn is in its early stages, and it will have a major impact on the tournament as far as some of the college anglers being able to take advantage of it,” predicts Gagliardi. “The hardest thing will be trying to figure out when to be in the right place to take advantage. I don’t want to say it’s random, but Murray’s herring spawn is kind of hit and miss.”

When Dave Lefebre nailed down the herring spawn pattern on Lewis Smith Lake in the Walmart FLW Tour event a couple of weeks ago, he noted the best spots were where there were large rocks in the water. Smith Lake and Murray are dissimilar in that regard, however. Gagliardi says that anglers are more likely to find herring spawns on main-lake and secondary points, adjacent to steep sloping banks, along riprap banks and anywhere there is hard bottom. That covers a lot of territory at Murray, but it reinforces Gagliardi’s notion that being in the right place at the right time is perhaps the best pattern – albeit an unpredictable one.

“When it starts, it just starts; there are no key places, and I wouldn’t characterize any one section of the lake as being known for having more herring spawns than any other,” he says.

If a college team is fortunate enough to locate balls of herring in the shallows, topwater lures such as prop baits will entice strikes, as well as various swimbaits. Fluke-type baits, fished singly or in tandem rigs, also are sure to draw attention.

“It’s pretty much a school-fish deal,” notes Gagliardi. “It’s not quite the same as when I caught them last August, but it’s similar enough to look at them that way.”

What Gagliardi doesn’t expect to happen is a deep-water finesse bite, which also wasn’t a game-changer last summer. Though Murray is known for its big spotted bass, Gagliardi thinks they’ll be up shallow, either preparing to spawn or in postspawn mode and gorging on blueback herring.

“Frankly, I don’t see finesse fishing having much impact on the outcome,” he says. “Of course, maybe some West Coast college kid will prove me wrong, but I don’t think I would spend much time trying to establish an offshore pattern. It’s going to be more of a grind-it-out deal along the shoreline.”

Current lake conditions, typical for Lake Murray this time of year, favor Gagliardi’s forecast. Water temperatures are in the low 70s, and except for “a little color” in the mid-lake area that came as a result of recent heavy rains, visibility ranges from about 4 to 5 feet. The event is shaping up as a shallow-water smackdown.

“The [Saluda] river has a little more stain to it, but you can catch them,” advises Gagliardi. “No doubt you can go up there and catch fish, but I don’t know whether you can catch enough fish over three days to hold up. I think everything’s going to be decided down in the middle and lower parts of the lake.”

Colorado Mesa University  – Kennedy Kinkade and Josh Worth, both of Grand Junction, Colo.

Jacksonville State University – Nate Killough, Sylacauga, Ala., and Will Bullen Jacksonville, Ala.

University of Alabama – Keith Kirkley, Northport, Ala., and Frankie Appaluccio, Tuscaloosa, Ala.