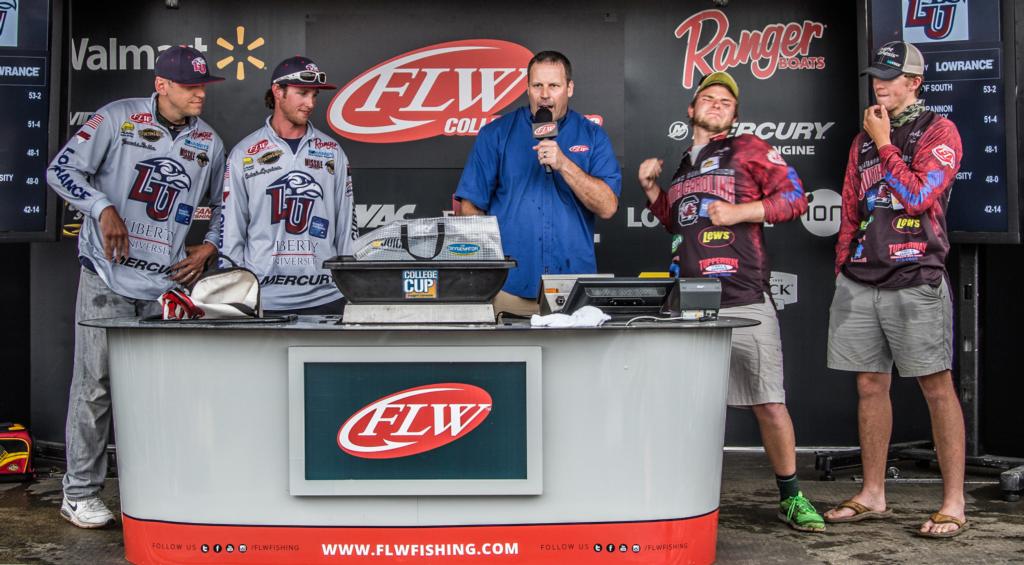 COLUMBIA, S.C. – As any good Palmetto State bass fisherman will tell you, home lake advantage only works if you’re consistent in your catches from day to day. Anthony Gagliardi proved it here on Lake Murray last summer in the Forrest Wood Cup, and the University of South Carolina proved it again in the FLW College Fishing National Championship that concluded Saturday. The home-standing Gamecocks put together three solid rounds of limit catches to amass a tournament-winning weight of 53 pounds, 2 ounces.

In capturing the 2015 championship title, the South Carolina team of Patrick Walters and Gettys Brannon edged previous tournament leader Liberty University of Lynchburg, Va. Liberty’s Travis Rulle and Caleb Eppler weren’t too shabby in the consistency department either, as they led the tournament presented by Lowrance Genesis Insight College Cup the first two days. The problem for them was that they couldn’t finish with five good keepers, though four almost did it for them. As it was, the Gamecocks won by a 1-pound, 5-ounce margin. Their prize package included a Ranger Z117 with 90-horsepower outboard as well as berths in the 2015 Forrest Wood Cup on Lake Ouachita in August.

When their victory was announced by Chris Jones, the tournament master of ceremonies, the partisan crowd at Carolina Baseball Stadium rose to its feet in a wild outburst of jubilation. Indeed, during the competition the hometown favorites were followed around the lake by a small flotilla of family members and friends. It didn’t require too much fuel. Typically, the Gamecocks’ day began and ended in Bear Creek, where the bulk of their catch originated.

“We rotated around 15 or 20 places  – mostly points and docks,” says Brannon. “These were all places where we knew from previous experience that, at this time of year, the blueback herring spawn is pretty reliable. Truthfully, the bite wasn’t as good as we had expected and predicted, and it got slower. Today [Saturday] we threw Carolina rigs the first hour and then switched to Zoom Flukes, which was just the opposite of what we had been doing before. But we got our biggest fish on the Carolina rig so we stayed with it awhile. When we did switch to Flukes later, the whole deal was cranking them as fast as we could, with short twitches along the way. And we were using reels with 7:1 gear ratios.” 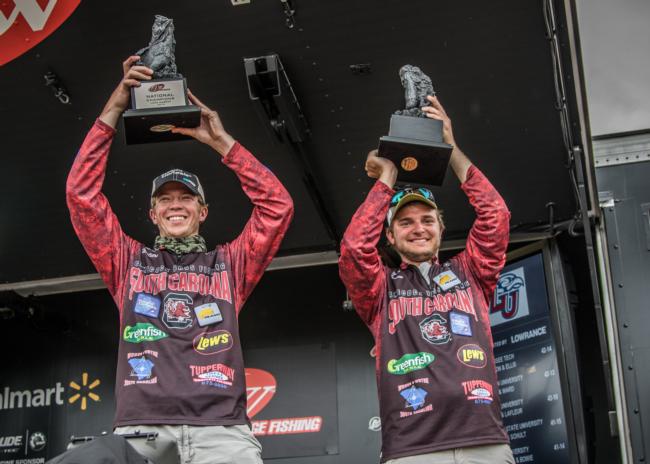 The pair started out in sixth place on day one with 17-6, then went to second with an 18-11 stringer that gave them 36-1. In the meantime, Liberty University opened its bid on Thursday with the tournament’s best limit, 22-2, which was anchored by a 7-pound, 9-ounce largemouth. Rulle and Eppler followed with 14-4 on the second day and though the four fish they brought to the scale the last day averaged almost 4 pounds apiece, their failure to catch a fifth keeper cost them dearly. Walters recalls that when he and Brannon started culling (they culled four times Saturday), they reckoned they would need at least 15 pounds to stay in the hunt. They weren’t far off.

“The fish weren’t as aggressive Saturday as they were earlier in the week,” says Walters. We were around blueback herring all day, but the bass just weren’t very cooperative. We really had to work for the better fish and were fortunate enough to cull the four squeakers that we caught early in the day.

As was the case with most of the top 10 teams that fished Saturday, Liberty University had a game plan that revolved around fishing herring blowups. The Flames had the area they fished to themselves early in the tournament, but had to share water Saturday because of a local tournament that launched near where they were fishing.

“We were fishing in the area of the lake where it joins the riverine section above Dreher’s Island,” notes Rulle. “I’m not making any excuses, but when we started fishing our best spot this morning, a local came up and literally started fishing within 20 feet of us. He was casting in front of our boat and our lines crossed a couple of times. Finally, we just gave up and moved on. It was pretty distracting.”

Eastern Kentucky’s Kyle Ramer and Ethan Snyder finished third on the strength of Saturday’s best stringer: 17-10. The Colonels were in second place after the opening round and fell to sixth on day two before rebounding.