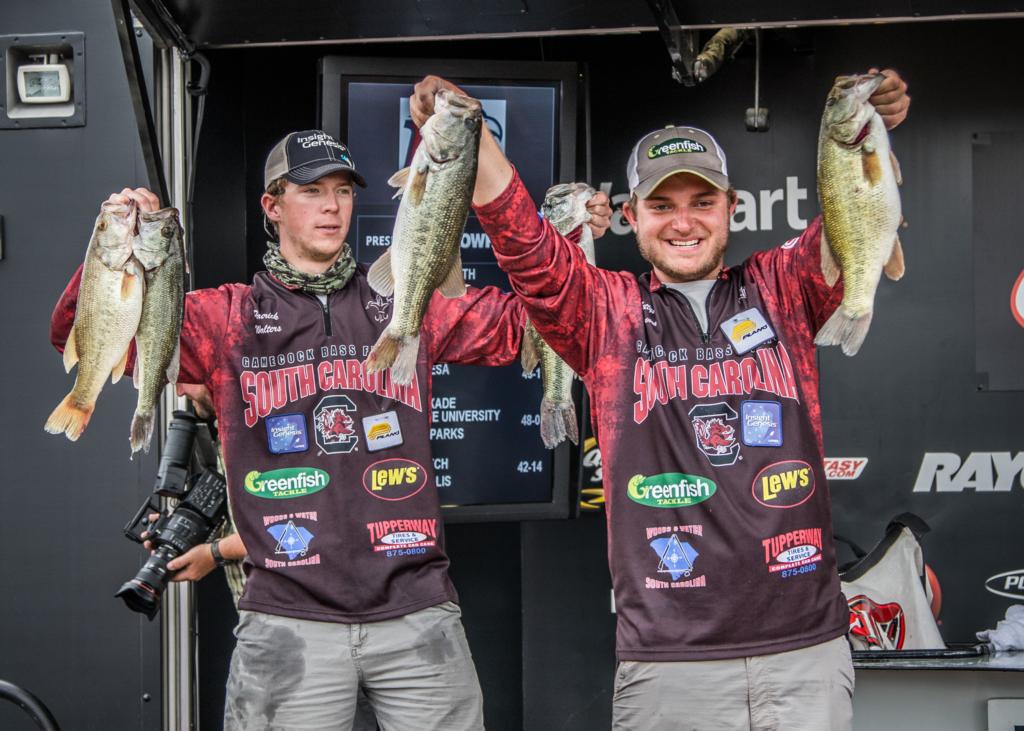 Look at what we caught! The Gamecocks' Patrick Walters and Gettys Brannon bring 17-1 to the scale on the final day of the FLW College Fishing National Championship. Photo by Colin Moore.
April 19, 2015 • Colin Moore • Abu Garcia College Fishing

As contestants in the FLW College Fishing National Championship on Lake Murray discovered last week, fishing the blueback herring spawn can be backbreaking work. All that stooping over to grab a different rig to cast at bass busting their favorite forage, and then quickly straightening, is hard on the old spinal column. Flexing up and down is what it took to contend in the championship, however, as bass couldn’t make up their minds whether they wanted their grub served on the surface or closer to the bottom.

Typically, the collegians were fan-casting Carolina rigs, umbrella rigs, hard jerkbaits and even crankbaits to likely looking points and broad flats. Sometimes they caught fish with such random prospecting, but perhaps more bass were taken when anglers found themselves within casting distance of blowups and were quick enough to grab a soft jerkbait rig or topwater lure and virtually spoon-feed it to the fish.

Here’s how it transpired for the top 10 teams in the championship, which was presented by Lowrance Insight Genesis College Cup and hosted by Columbia/Lake Murray Country.

The Gamecocks exuded confidence throughout the three-day event, mainly because they had the best herring hangouts in Bear Creek and environs pegged. The pair typically began the day fishing points or the backs of pockets with Zoom Fluke rigs, and then followed up with Carolina rigs later in the day. See the full story about their win here.

“We couldn’t find the big bite all week, but the places we fished were loaded with bluebacks, and the bass replenished the whole time,” says Patrick Walters, a sophomore business major. “We just kept targeting the aggressive fish, the ones that were coming up and busting, and hoping to connect.”

If they found surface action early, they cast Zoom Flukes or Trick Worms rigged weightless or nearly so into the melee. Otherwise, they fished Carolina rigs and shaky heads in hopes of attracting fish that weren’t so aggressive. As far as the depth or color of the water, it didn’t seem to matter.

“One of the misconceptions a lot of people have when they first fish here is that blueback herring like to stay around areas with hard clay bottom, and have to have a certain depth, but I haven’t found that to be so,” volunteers Walters’ teammate, Gettys Brannon, a junior advertising major. “They might be anywhere along a shoreline – near wood cover, points, the back ends of coves – whatever. You just have to find the places where there seems to be the most and start fishing.” 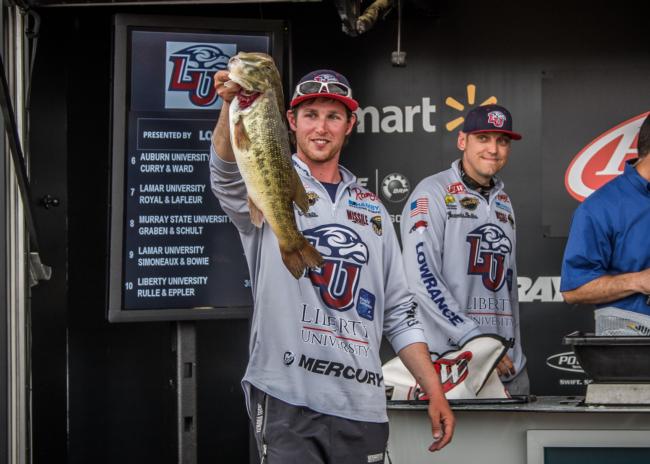 Travis Rulle and Caleb Eppler led the first two days, but failed to weigh a limit on day three and it cost them. They were fishing points, flats and shallow coves along the main lake, but their best spot was a long, shallow point with a deeper saddle in it where the bottom descended to about 10 feet at its deepest before coming up again. Rulle says the fish were positioned on either side of the depression and showed a preference for Fluke rigs.

“We had about four or five different retrieves that would trigger bites at different times even when they weren’t busting,” recalls Rulle. “If the fish were really busting, you couldn’t wind it fast enough to keep it away from then. But maybe later in the morning you had to give them some changeup. Sometimes it was almost like dead-sticking – just twitching it along slowly.

“Clouds, rain, wind, no wind – we had every weather condition covered,” he continues. “What hurt was that we couldn’t connect with a lot of the bigger bites the last day. Some of the fish were just coming up and swiping at the Fluke, and we missed them. A couple of them just came unbuttoned as we were trying to get them in the boat. We tried to adjust, but just couldn’t connect with the fish we needed. They were less aggressive Saturday, for sure. ” 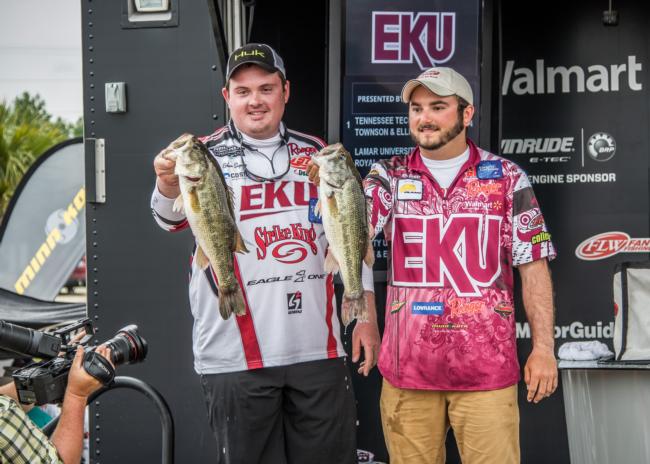 Kyle Raymer and Ethan Snyder found their best fishing in Crystal Lake and caught every keeper they had there. Like just about everyone else fishing the championship, the Colonels targeted “herring points,” and had their best success with topwater hard baits: Bone-colored Strike King Sexy Dawg and Lucky Craft Gunfish being the principal offerings. Otherwise, they fished Strike King Caffeine Shads on weighted hooks.

One of their secondary patterns involved fishing the backs of pockets and up creeks where water willow grass and wood cover such as docks or laydowns was prevalent. Here they fished Rebel Pop-Rs and Strike King Hack Attack Heavy Cover Swim Jigs. 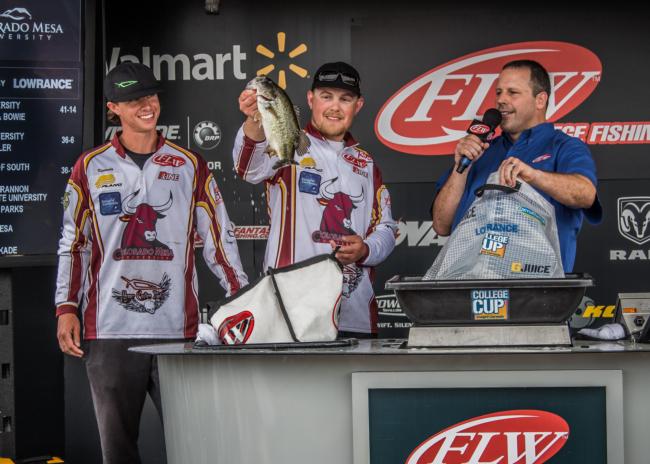 Though the Colorado teammates drove a long way to get to Columbia, S.C., they were veritable homebodies when it came to fishing Lake Murray. Each morning the pair made a beeline for Bear Creek, a few miles from the launch site at the dam, and ensconced themselves on one of two or three points where they waited for herring blowups. Otherwise, they fished a couple of narrow chutes between the mainland and islands that served as funnels for migrating herring and their bass tagalongs.

“The herring and bass were just coming and going around the points,” says Kennedy Kinkade. “There was really no rhyme or reason to when the fish would blow up. If you were in a good spot when it happened, you probably were going to get bit. It might not be a keeper, but you were going to get a fish on.” 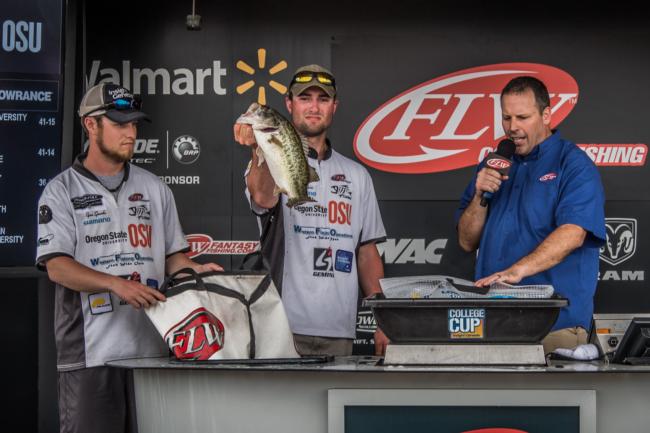 The Beavers were in one of the college boats zigzagging around Bear Creek looking for herring blowups. They fished mostly flats and points with a Sebile Magic Swimmer 125, a Lucky Craft 100 Pointer Minnow and umbrella rigs. Chase Cochran and Ryan Sparks say most of their fish all three days came from water between 2 and 8 feet deep.

“We only had about two or three spots we rotated,” says Cochran. “Saturday, it was like the fish didn’t really want to eat. They would chase our baits like crazy, but then stop short. Maybe they just got tired of seeing so many lures coming at them from all directions. 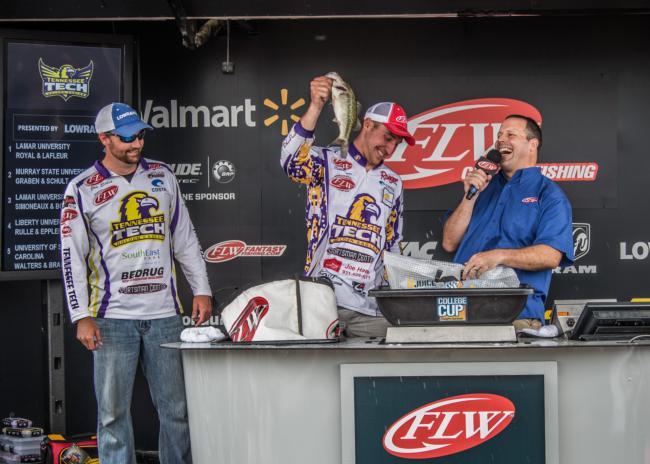 The Golden Eagles headed up a very crowded and close field in sixth and 10th places. The top 10 weighed their fish in reverse order, and the lead changed five times before Eastern Kentucky hung on to it – at least for awhile. Tennessee Tech was one of those leaders.

“We’d love to come back in a couple of weeks when the herring bite is really on,” Joe Ellis told the weigh-in crowd. “It’s starting to warm up, but it’s nothing like it’s going to be.”

Matthew Townson and Ellis concentrated on the Hollow Creek area past Dreher Island and fished water 2 to 6 feet deep with a pencil popper (chrome and blue), a BOOYAH buzzbait and umbrella rigs loaded with Basstrix swimbaits. 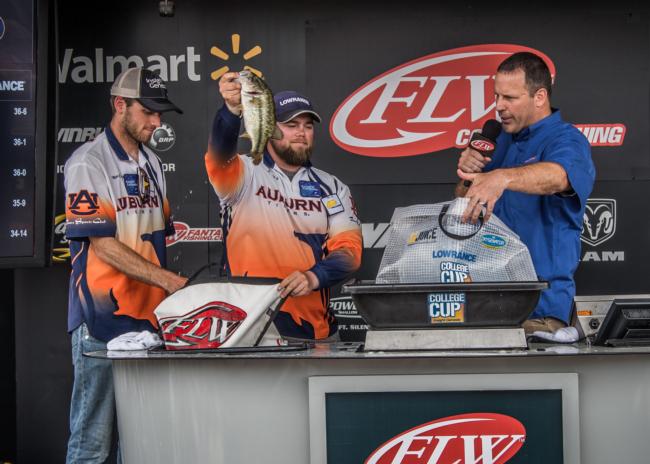 The Tigers fished points around Shull Island and in Hollow Creek. As other anglers noted, the best fishing occurred early in the day, and then tapered off to practically nothing by noon.

“We had to have long, shallow clay points with scattered rock in about 3 feet of water,” says Tim Ward. “The steeper points were no good. As it was, fish were busting all around us, but they knew the difference between lures and herring. You’d think once they were excited like that, you’d get lots of reaction strikes, but it didn’t happen all that often.” 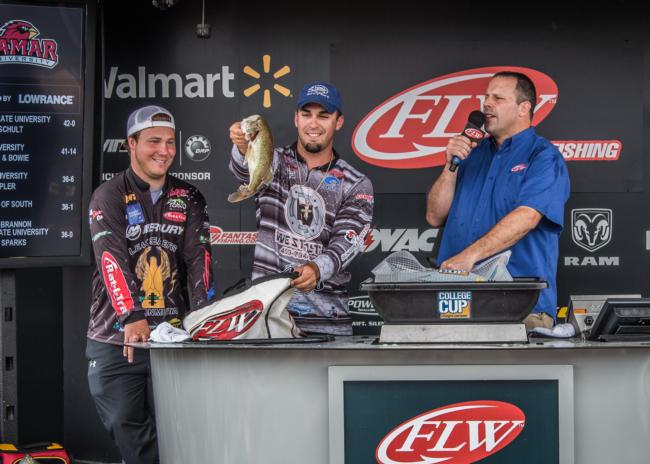 Justin Royal and Cameron LaFleur fished Crystal Lake’s shallow points with Luck Craft Gunfish topwaters and Strike King Shadalicious swimbaits. Royal notes that the herring seemed to disperse gradually into smaller schools and move closer to the shoreline, perhaps to take advantage of warmer water. The lake temperature dropped a few degrees because of a cold front that settled in Thursday. 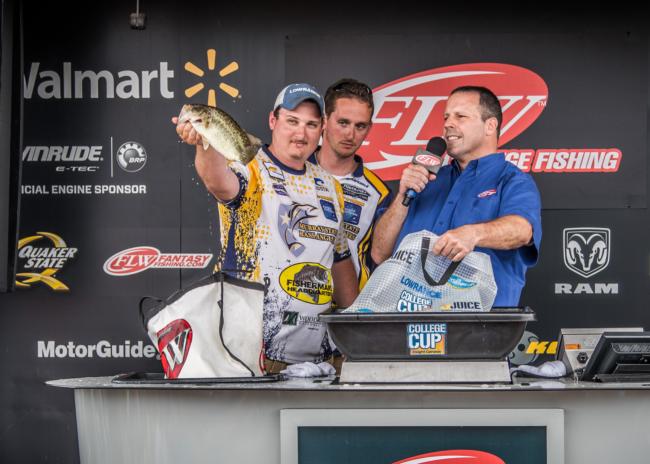 Each day the Racers rotated through 10 long shallow points in 3 to 6 feet of water close to the Saluda River arm. They never saw another contestant’s boat. Lucky Craft Gunfish and Sammy topwaters were their best producers.

“It was a matter of being on the right point at the right time,” says Justin Graben. “There didn’t seem to be any predictability to where you needed to be at a certain time. Maybe more sun and more wind would have helped us, but it would have helped everybody else too.” 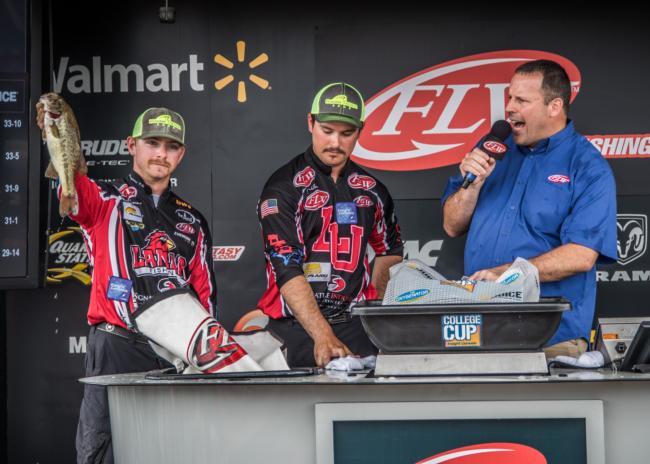 The Cardinals qualified three teams for the championship, and two of them reached the finals. Brandon Simoneaux and Josh Bowie were part of the Bear Creek scrum and fished umbrella rigs around shallow points most of the time.

“I think if we had more wind, we would have done a lot better,” opines Simoneaux. “The wind stopped at about 8:30 Friday morning, and so did our bite.”