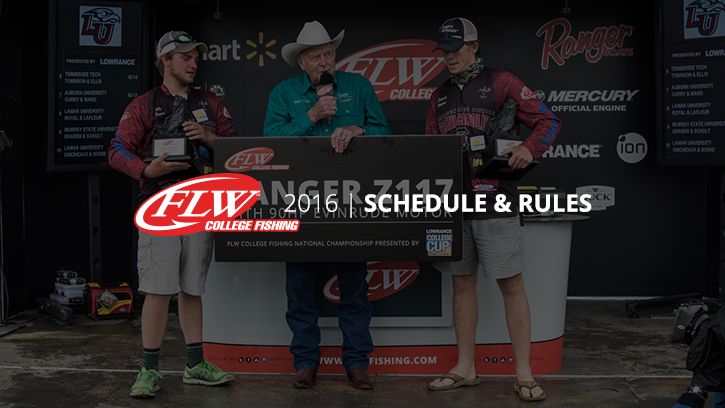 The 2016 FLW College Fishing National Championship will be hosted by the Mountain Lakes Convention and Visitors Bureau on Lake Keowee in Seneca, S.C, March 17-19. All of the Championship action will be internationally televised on NBC Sports Network, the Pursuit Channel and the World Fishing Network.

The first Open on Kentucky Lake in 2015 was the largest collegiate bass tournament ever assembled when 194 teams from schools around the country competed for a new Ranger bass boat and 10 early qualifying bids into the National Championship.

To ease the travel burden and expense of competition for teams during the 2016 season, FLW has eliminated the Conference Championships. The top 10 teams at each regular-season qualifying tournament will now advance directly to the 2017 FLW College Fishing National Championship. That means 105 more teams will have the opportunity to compete in the National Championship, where the top prize is a Ranger Z175 bass boat and an opportunity to make the Forrest Wood Cup.

Complete rules can be found online at FLWFishing.com.