The Spawn Should be on at Keowee 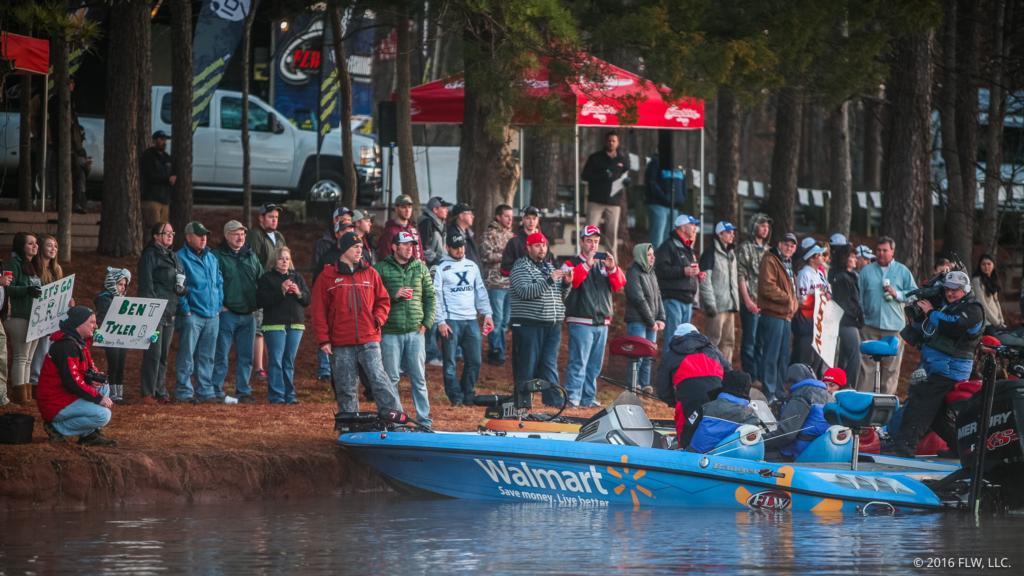 There’s been a consistent sentiment among the 2016 FLW College Fishing National Championship contenders in the weeks leading up to the showdown on Lake Keowee: They wished the tournament was scheduled for Keowee’s neighbor lake, Lake Hartwell.

In ordinary circumstances, bass fishing fans might not argue with that opinion, given the quality of fishing in Hartwell. But according to local reports, the timing of this season’s National Championship, which is March 17-19, should be just right for Keowee to churn out weights that might challenge the results from the Walmart FLW Tour event being held concurrently on Hartwell.

Local angler Randy Childers, who manages Lake Hartwell Fishing and Marine in Anderson, a local tackle shop, says he wouldn’t be surprised to see quite a few limits in the 18- to 20-pound range weighed in at the college event. And throughout the ranks he expects teams to catch solid limits.

Childers might know better than anyone else what Keowee can produce. Not only does he get the scoop on a daily basis from folks who stop by the shop to talk fishing, but his tournament-fishing resume proves that he’s one of the best sticks in the region. Childers has 28 top-10 finishes in FLW Bass Fishing League competition, including a win at the Savannah River Division opener on Keowee earlier this year.

More recently, Childers won a local tournament at Keowee on March 5 with a bag that went for more than 20 pounds and included a 9 1/2-pound bass.

“That’s about unheard of on that lake,” Childers says of the 9 1/2-pound hawg. “There are plenty of them in there, but it’s just hard to catch them because it’s a clear-water reservoir.”

Childers’ hawg aside, the fishing was very strong in the local event. The anglers behind him brought in 19 pounds for second place and 16 pounds for third.

Those big bags were buoyed by a recent warming trend that has kick-started the shallow movements of the lake’s largemouths, making them much easier to catch.

Most winning bags at Keowee include a mix of spotted bass and largemouths, with three or four spots comprising most of the weight and one or two kicker largemouths providing the difference in a top 10 and a win. At the college championship, however, it’s quite possible that the battle on Keowee could be a shallow-fishing duel with a lot of sight-fishing, which presents a perfect opportunity for anglers to flip-flop their limits and bring in more largemouths than spots.

When Childers won the local derby back on March 5, the water temperature in the south end was about 50 degrees, which he says is on the “cool side” this time of year. Near the power plant in the center part of the lake, where the water temperature was already in the 60s thanks to the warm-water effluent, bass were already on beds – the second heaviest fish in that event was caught off bed. The weather since then has been fantastic for setting up a major push of largemouths: highs in the 70s and 80s and lows in the mid- to upper 50s. The forecast between now and the tournament calls for more of the same.

“The fish are going to be moving up to the shallows,” Childers predicts. “We’ll see largemouths play a big role in this tournament. A lot of tournaments here are won on spots, but the way this is set up there will be a lot of big largemouths caught. It’s going to change the weights a little bit. Most of the time if you get around the 12- to 14-pound range, that’s a really good day on the lake. But when those largemouths move up like that, then you could see that 19- to 20-pound bag. It doesn’t take but just a few good warm days here with sunshine and all to really get those fish ready to go.” 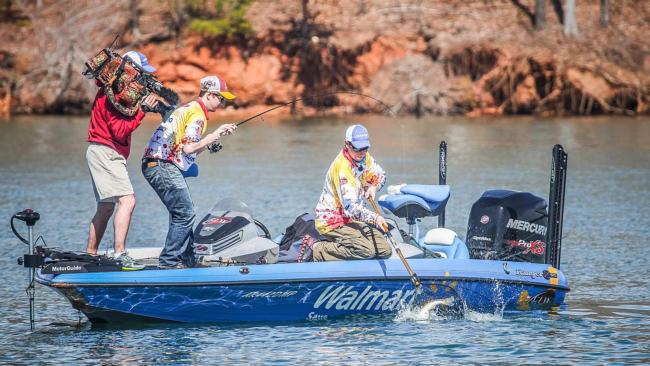 Despite all the talk of largemouths moving up and potential sight-fishing opportunities, don’t count out the deep-water specialists entirely. If the weather was to change and somehow hold up the shallow patterns, or if fishing pressure between now and the tournament eats up all the bigger largemouths, chunky spotted bass could still be a factor.

Mostly, however, it’s risky to bet on a largemouth-only game plan in any multi-day tournament at Keowee

“There’ll be some spawning over there. It’s a nuclear lake, and in the upper lake they’re spawning right now,” says Troy Morrow, another local and a Walmart FLW Tour pro. “I just don’t know if you could sight-fish the whole time.”

“Consistency is going to play a big role,” Childers adds. “Watch for the guys that can get up there and get a couple of the good largemouths, and then finish off with the deeper spots. They’ll be the chunks – fat, gorged spots. A guy stands a really good chance if he can put together both deals.”

The better spotted bass can be caught on jigs, drop-shots, under-spins and other moving baits on humps and what the locals call ditches – the “valleys” in the center of pockets and cuts. Childers says they really stack up in those areas this time of year while they’re in prespawn mode. In the tournament he won most recently, several of the lake’s top offshore sticks managed limits of 13 to 14 pounds fishing exclusively in deep water. Weights like that for two days should earn a team a spot in the championship’s final round on Saturday.

Still, as it’s setting up, the odds are better for a team that can hop around a little bit and sample both deep and shallow areas.

“You can still catch some out,” adds Morrow, “but it’s too late and too early for the offshore deep-water schoolers. I think it’ll be a pattern tournament. I don’t think it’ll be won off a specific spot. You’re going to have to have a largemouth or two. I don’t think you can win it with spots alone.”

“I don’t think that it could be won just out doing the spotted bass deal, because there are going to be kicker largemouths caught in the tournament,” Childers adds. “The way the weather is, I just feel like a guy has to catch that really good kicker largemouth to win it. If I was in it I’d probably fish for the spots first, then later in the day after the sun gets up and the water starts warming, I’d probably go for the largemouths. Of course, if someone finds a big one on a bed, he’ll probably go there first.”

So what, if anything, could derail this primo fishing train? There are a couple of factors to consider.

There’s a lot of rain in the forecast for the region. Depending how long it takes for the resulting runoff to filter into the lake and settle out, anglers might encounter some stained water in the backs of spawning pockets. As of mid-week, visibility was about 8 feet in most creeks, with 10 to 12 feet in some areas of the lake.

The lake is prone to fluctuating a couple of feet over the course of a single day due to the needs of the power plant to cool its innards. A few temporary pattern windows could open up or close if it happens during the event.

Finally, Childers says prespawn largemouths tend to mix in with spotted bass on Keowee, and because the spots are so much more aggressive, anglers tend to catch more of them when they’re mixed offshore. So the timing of largemouths’ shallow transition – and separation from the spots – will be important to put those critical kickers in the boat.