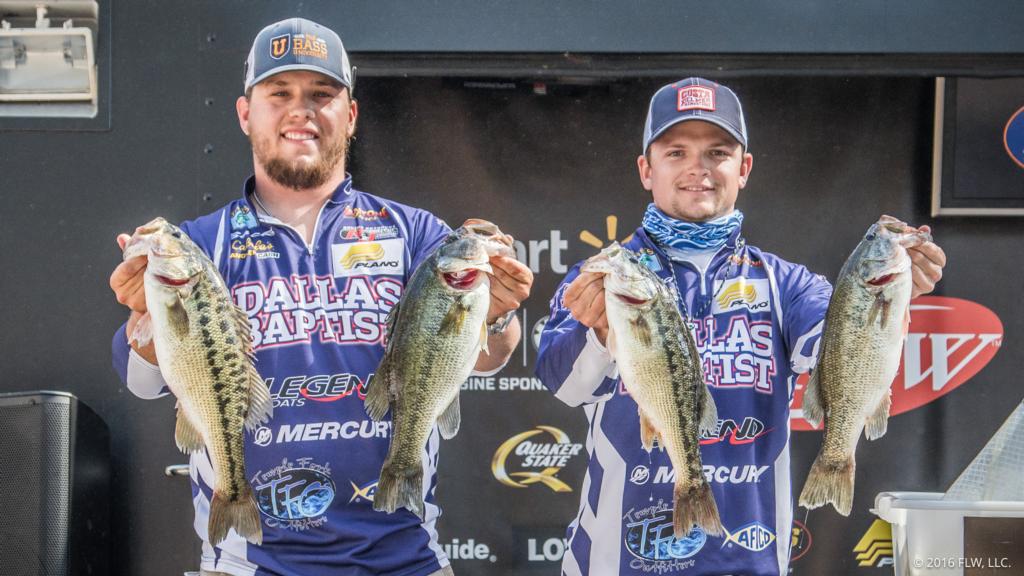 With loads of fish moving shallow, bed-fishing was one of the most likely scenarios – one that Hines and Foster certainly included in their game plan. However, diversifying their efforts delivered the results they needed.

“We knew we had some fish on beds, and I knew they were locked before we came into today,” Hines says. “We didn’t concentrate on those fish this morning. We concentrated on active fish – spotted bass – and took advantage of that early.

“As the afternoon went on, we started upgrading later in the day,” he adds. “We caught a couple of largemouths on beds and a couple of spots that also upgraded us.” 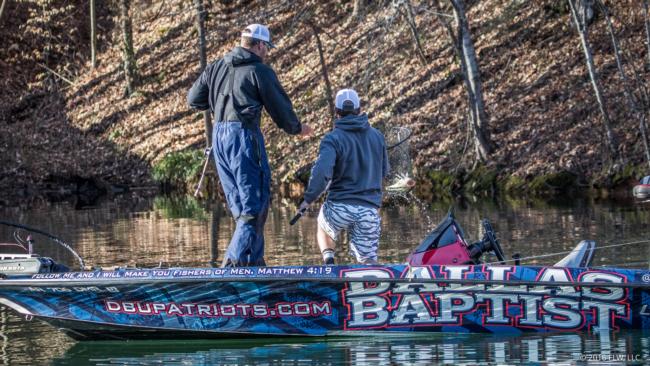 The early plan took into consideration the feeding patterns of spotted bass, along with the more location-specific nature of largemouth bass.

“We concentrated on the spotted bass early because we knew they were moving with those blueback herring, and they’re in a certain depth of water we’re looking for,” Hines says. “We’re catching some on docks, but it’s a combination of depth, water temperature and bait. If they’re there, it doesn’t take too long to catch one.”

For their largemouth efforts, Dallas Baptist targeted protected coves, even though today saw minimal wind. Some of the Patriots’ pockets offered a mix of largemouths and spots.

The leaders kept bait specifics vague, but Hines says traditional flipping presentations did the trick for bedding largemouths, while aggressive moving baits got the call for spots.

“We don’t like throwing the finesse-type baits on spinning rods if we don’t have to. We’re from Texas, so we want to throw something moving to get the active fish in the boat,” he says. “We targeted fish that would actively feed.”

Complementary teamwork played a significant role in getting DBU to the top of the field.

“Zack likes to throw a big bait, and I like to come behind him with something more finesse,” Foster says. “If he’s throwing a slow bait, then I’ll move in with something faster. Even today, when we were working our moving baits, we were both working them differently at the same time, just to get that reaction from the fish and make sure we could get every one we could get.” 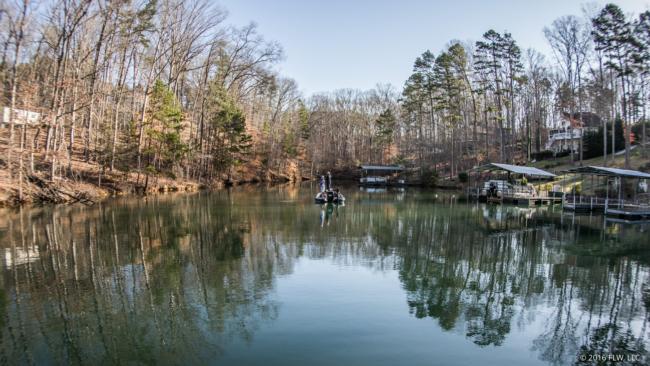 Nodding toward the cooling trend forecast for the weekend, the leaders won’t make any changes. They’ll just do their best to remain consistent with what worked on day one.

Hines says he’s confident his team can capitalize on the fish found on day one.

“I’m trying not to think about the weather; these fish are biting right now,” he says. “We probably caught three limits of fish, so if we can do that again, I think we’ll be all right.” 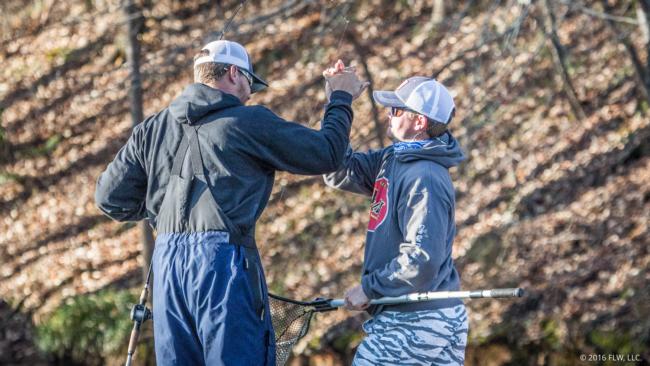 DBU’s lead comes on a day where narrow margins defined large chunks of the leaderboard. For example, only 6 ounces separate first place from second, while the gap between first and fifth is 12 ounces.

The point being, this is still anyone’s game, and those who fared well today will need to remain consistent tomorrow if they hope to reach Saturday’s finale. Teams that posted a decent showing today can quickly find their fortunes shifting if they get the right bites on day two. 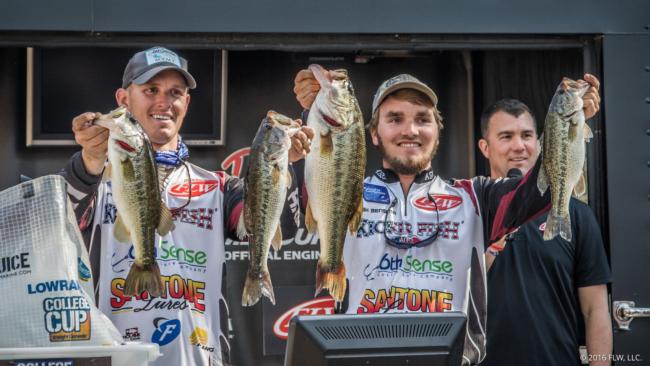 Matthew McArdle minced no words in describing the strategy that led him and teammate Josh Bensema to a second-place performance. Foregoing any level of bed-fishing or spotted bass patterns, the Texas A&M anglers kept moving down attractive banks near spawning grounds in search of big largemouths coming or going.

This plan, Mcardle says, was never in question.

“This is the National Championship; we’re swinging for the fences,” he says. “We’ve heard a lot of people talking about bed fish, but we’re seeing a lot of fish up there cruising. So we’re just chunking and winding. We’re just going down the bank, covering water.”

Not that they lacked for any confidence, but nabbing a 4-pounder in the first 30 minutes dropped an exclamation point on the Aggies’ mission statement.

“We knew we could catch plenty of 2- to 2/12-pounders, but we got lucky and Josh ran into that big one first thing this morning,” McArdle recalls. “It didn’t put us in the lead, but it put us up there where we can take over the lead tomorrow. We have a couple of areas that we have confidence in, so hopefully they’re still there tomorrow and they’re still biting.” 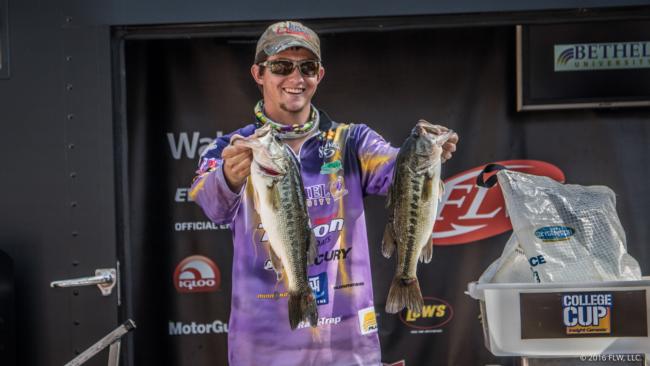 Fishing alone (his partner transferred schools prior to the championship), Kristopher Queen kept his head down, did some good work and put Bethel in the No. 3 spot.

“You can’t joke around in the boat all day; it’s really just a grind,” he says of fishing alone. “There were a lot of fish moving up shallow today, and I caught a couple sight-fishing. But it was tough because of boat positioning and not having two baits in the bed.

Queen caught mostly largemouths, but he also caught a couple of spots. Texas-rigged soft plastics and soft jerkbaits were his main baits.

Of the solo routine, Queen says his music replaces teammate conversation. Lacking anyone to net his fish, he had to boat-flip each one. 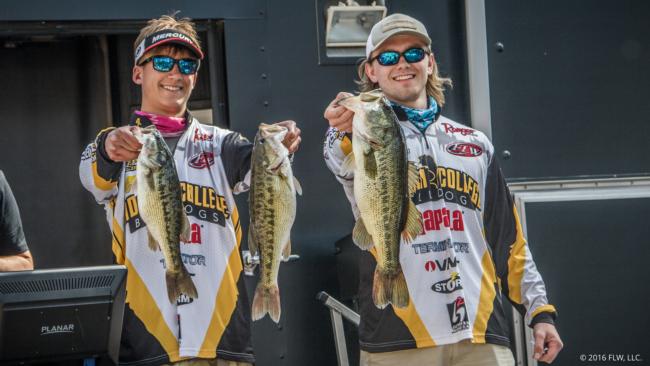 Starting their day by nabbing a few spotted bass on jerkbaits, Jarrett Martin and Jacob Bayer made the right moves to adjust with the fish and secure a fourth-place opening position for Adrian College.

“Once that sun got up, the jerkbait bite ended and the fish moved up under the shade, so we really had to finesse them out,” Martin says. “It took a while to get them to eat. We didn’t have any bed fish, but luckily Jake caught a 5-pounder that I think was just cruising and looking for a bed.”

Martin and Bayer located some decent bed fish, but they were not “locked on” (committed to the beds), so the anglers opted to target likely areas where cruising fish might frequent. Skipping and flipping Yamamoto Senkos around docks proved most effective.

“We have about 20 spots that we have confidence in,” Martin adds. “We only ran 10 of them today, so we’re hoping the other 10 produce tomorrow so we can move up.” 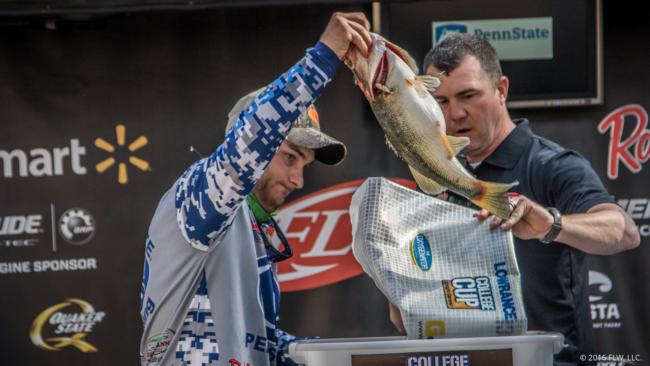 Ditching that “When in Rome …” notion, Matt Bakewell and Tyler Smith figured their best shot at doing well was to target scenarios with which they were familiar. The plan played out well and put Penn State in fifth place.

“We weren’t used to the clear water on Keowee, so we decided to return to a creek we had found in practice,” he explains. “It turned out that the recent rain had turned the water a coffee color, and that’s what we’re used to fishing.”

They spent their day flipping docks where they had spotted bedding largemouths. The stained water prevented actual sight-fishing, but diligent flipping delivered the bites. 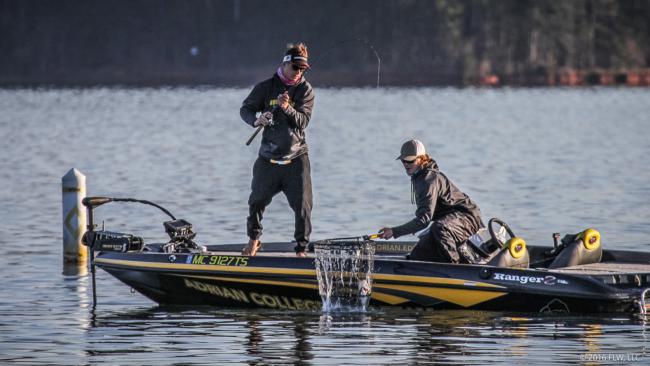 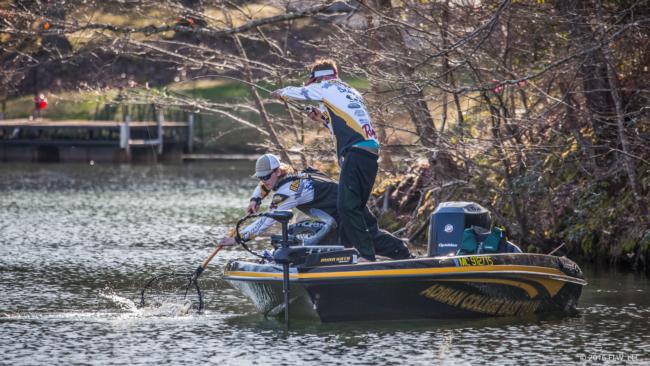 A lot of teams started their day on main-lake points, humps and rocks where large numbers of spotted bass reside. Filling a limit with spots and then transitioning to the backs of pockets to look for upgrading largemouths seemed to be a common script.

Several team mentioned the importance of the early bite, and a couple of key points factor into that premise. First, sunny conditions like today’s will quickly push the roaming fish into and under shady cover, or deeper in the water column. The fish will still bite, but they often ease back on the aggression throttle.

Another important factor is baitfish positioning. Mornings find the bait higher in the water column where it’s eager to grab that morning warmth. However, intensifying sunlight pushes them deeper within a couple hours of daybreak.

Those who adjusted to these and other dynamics will undoubtedly try to build on what they discovered during day two. 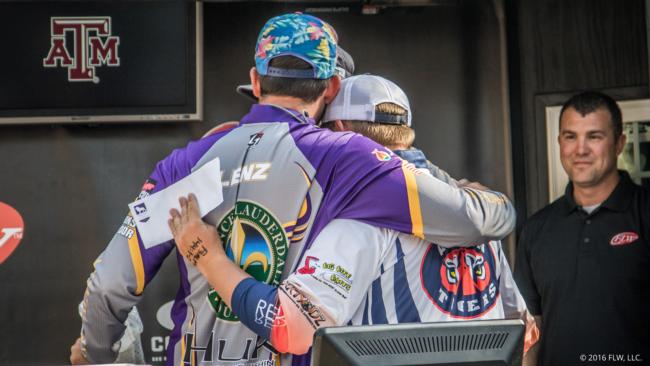 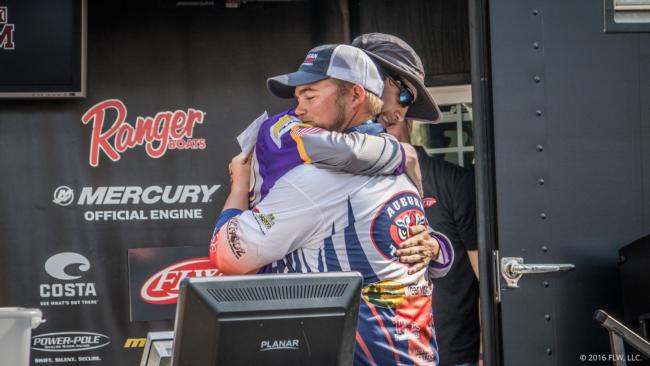 “You always want to beat your competitors, but you also want to help them when they’re down,” he says. “Timmy’s a great guy, and we all try to come together in times like this. College Fishing is one of the best families out there.”