Battle of the Champions Begins

Blanchette is mounting a comeback 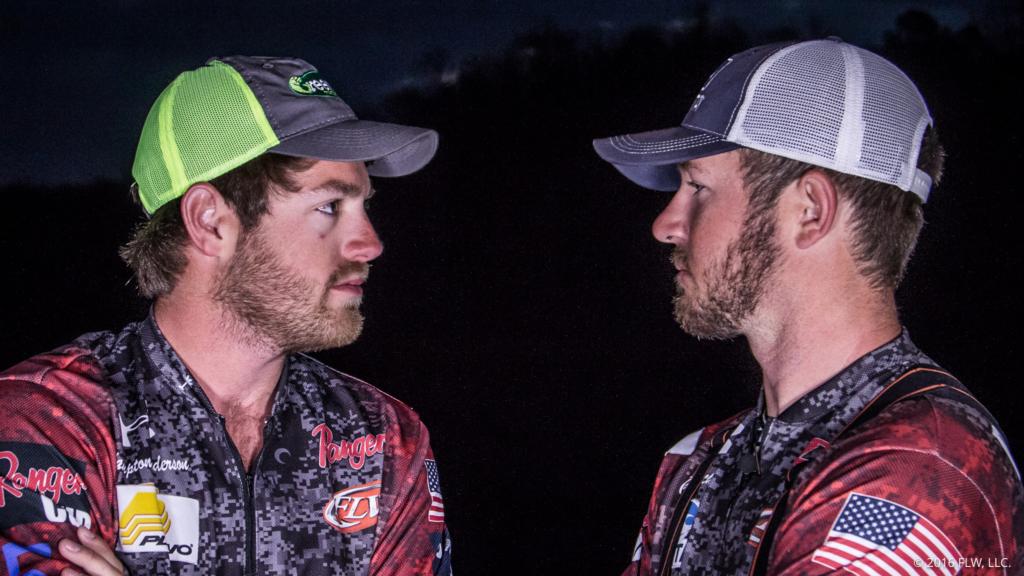 3 p.m.: The anglers are off the water, weights too close to call

Weigh-in for the first-ever FLW College Fishing fish-off for the Forrest Wood Cup starts at 4 p.m. at Green Pond Landing, right before the final Walmart FLW Tour weigh-in. The competition between Hampton Anderson and Chris Blanchette is too close to call. The shallow largemouth bite was slow all day, and the spotted bass seemed to slow up as their check-in time approached. You'll have to come to the FLW weigh-in or tune in on FLW Live to find out who's going to the Cup.

Blanchette has been visibly rattled a bit this morning, but he’s got his emotions in check now and just boated a 3-pounder that his about a rod’s length from the boat. That’ll put him at about 5 pounds with a good bit of time left to fish until check-in at 2:45 p.m ET.

Down the lake, Anderson is pitching and skipping laydowns and has upgraded twice to about 8 pounds. Though his lead is still healthy, Blanchette can still box two more fish without needing to cull out weight at the same time.

Anderson has widened his lead, adding a keeper and bringing his total to about 7 pounds. He’s ditched the pockets now and is currently working points with a shaky head.

Blanchette still only has about 2 pounds, and he’s a little flustered. He’s broke two fish off and lost four so far. On the plus side, he had one take his bait twice in dirty water and though he couldn’t get her to bite again, he’s pretty sure he located a bed to come back to later. At the moment, he’s working the bank with a ChatterBait and still looking for a limit.

Hampton Anderson got out to an early lead and he’s continuing to add on as the morning progresses. So far, he’s got four bass for about 5 pounds, all caught targeting laydowns inside of pockets. Blanchette has added another keeper, so he’s up to two now, but they aren’t worth much more than a pound apiece. Now, he’s finally going to make his move up the river.

There’s a ton of time to go, but right now Anderson is out to the early lead. Anderson started cranking clay points and he’s got two in the box for about 3 pounds. Blanchette is planning on targeting largemouths, but he made a stop on a stumpy point in search of spotted bass to start thing off and he’s got one in the box for under a pound. Word is, he’s planning on running up the Rocky River in short order to search for some green ones.

On an average day, Chris Blanchette and Hampton Anderson are good buddies and fishing partners. Today, their friendship remains, but they’ll be squaring off as competitors in FLW’s first-ever Battle of the Champions. The one-day contest on Lake Russell is to determine which member of the FLW College Fishing National Championship-winning team gets to go to the Forrest Wood Cup on Wheeler Lake in August.

Blanchette and Anderson of the University of South Carolina were crowned champions yesterday afternoon following three days of competition on Lake Keowee.

Prior to last night’s weigh-in, the location of the fish-off was kept secret by Tournament Director Kevin Hunt. So the anglers had only one evening to prepare. Both locals, the Gamecocks anglers have experience on Russell, though Blanchette is the more familiar of the two. He says he likes to fish Russell in the summertime when Lake Murray and other local fisheries get tough.

“I’m going to make the long run down, then come all the way back,” he says. “I’m going where I always fish, and I’m going for largemouths. There aren’t many places where they live here, and they’re tough to catch. If I can catch 10 to 12 pounds I’ll be OK. That’s usually what it takes to do well in a BFL or any tournament here.”

Anderson’s plan is to just go fishing … without a real formal strategy.

The anglers took off from Sanders Ferry on the upper end of Russell at 7:30. Their check-in time is 2:45, with weigh-in to take place at Green Pond on Lake Hartwell prior to the Walmart FLW Tour weigh-in.