Patterns varied, though the south end of Keowee dominated the top 10 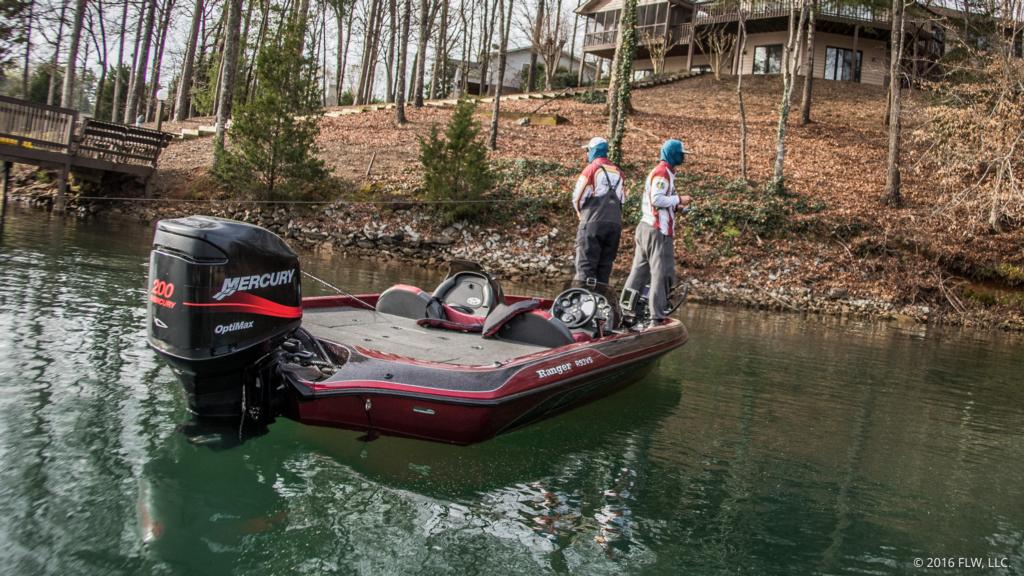 Contending with ultra-clear water and picking through loads of small fish presented a challenge for the 54 teams competing in the 2016 FLW College Fishing National Championship on Lake Keowee.

The University of South Carolina’s Chris Blanchette and Hampton Anderson won the event by targeting spotted bass with Yamamoto Senkos fished around stumps in 5 to 7 feet of water on clay banks, and by looking for largemouths bedding and cruising in creeks with lots of woody cover.

Other finalists experienced varying levels of productivity. Here are the details on their patterns, as revealed after the final weigh-in Saturday. 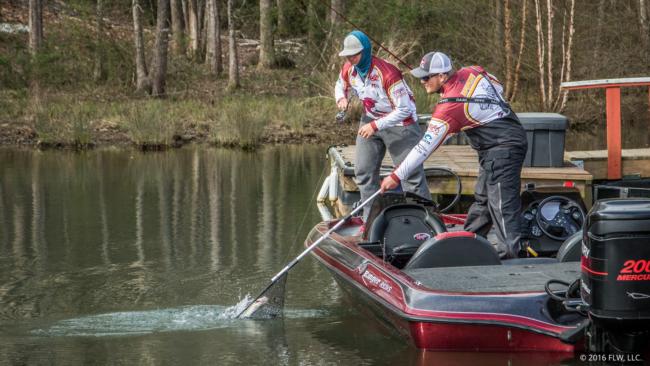 2. Colorado Mesa – Worth and Kinkade mix it up for second

Using a diverse arsenal of baits, Colorado Mesa’s Josh Worth and Kennedy Kinkade improved from fourth place to second on day three and finished just 14 ounces behind the University of South Carolina with 38 pounds, 1 ounce.

On days one and three, a Zoom Trick Worm wacky rigged on an Owner Mosquito Hook with a homemade nail weight produced their bigger fish. A wacky-rigged 5-inch Senko yielded the better bits of day two.

“The jig came into play around docks,” Kinkade says. “The fish were targeting those bluegills, and the jig was a perfect bluegill imitation with the purple and chartreuse skirt. We’d switch between the jig and the worms around wooden docks and picked up some good spots doing that.”

A mixed bag of species was essential to their success.

“We had to have big largemouths to be able to do this,” Worth says. “The spots also played a huge roll. Once you got those big largemouths, you had to have some good spots or a couple smaller largemouths so you didn’t have those 12- to 13-inch squeaker spots [in your limit]. That’s where the jig came into play.” 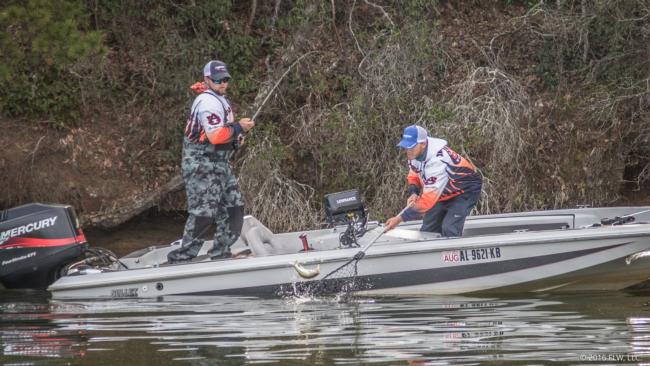 3. Auburn – Ward and Jennings get wacky for third

For two days, Timmy Ward and Mitchell Jennings could count on starting their day with at least one good fish on an umbrella rig baited with Reaction Innovations Little Dippers. In the final round, that bite went away, but the Auburn team found something else that helped it fish its way into third place with 38 pounds.

“We transitioned and ran to South Cove across from the launch site, and we fished floating docks with wacky-rigged, nail-weighted Zoom Trick Worms in green pumpkin,” Ward says. “We’d let them sink all the way to the bottom. You’d just pick up, and they’d be there.”

Notably, the Auburn anglers employed creativity for their rigging. They used a piece of a plastic drinking straw en lieu of an O-ring to keep their wacky hook in place on the worm.

The Auburn anglers complemented the wacky rigs with Trick Worms on shaky heads to occasionally give the fish a different look. 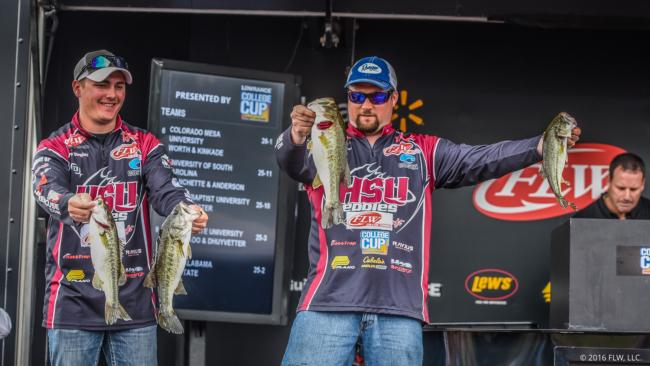 4. Henderson State – Gross and Wingfield go up top for fourth

Picking up on a key tactic turned things around for Michael Gross and Cobey Wingfield, who earned fourth place for Henderson State with 35 pounds, 14 ounces.

“The first day, we caught a lot of fish on a Megabass jerkbait, but we didn’t get the memo until the second day that the fish were on topwaters,” Gross chuckles. “Yesterday, the clouds rolled in, Cobey picked up a topwater and landed a 4-pounder. From there, we figured out another pattern, and it was on.”

That topwater, a clear Heddon Zara Spook, produced all of their fish on days two and three. Wingfield says that accenting their topwaters with Gamakatsu feathered trebles made the bait more attractive to the fish.

“I just think it adds more color to the bottom of the bait and gives it that little contrast,” he says. “I’d been throwing that clear Spook, so I just think that contrast helped. They would just hammer it.”

“I had the confidence to pick up that bait, and once I did, it was lights out,” he says.

The anglers fished their Spooks over shallow spots with rocks and brush.

“There were a lot of little ones that would come up and smack at it, but the bigger fish would come up and inhale it,” Wingfield realls. “Because the water’s so clear here, we tried to stay off the bank as far as possible and make really long casts and work the baits really slowly over the brush.” 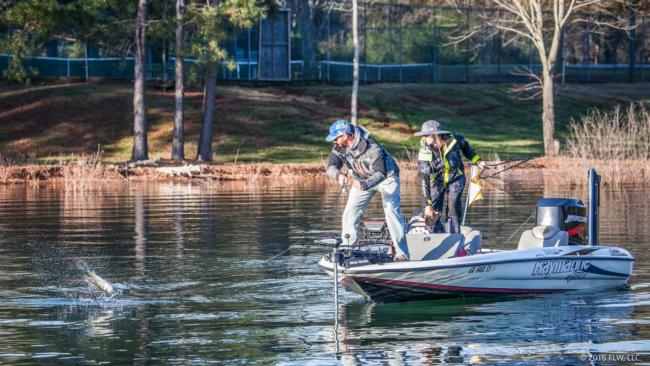 Dawson Lenz says he and Andrew Tate had to adjust every day of the event, but this flexibility delivered a fifth-place finish for North Alabama with 35 pounds, 2 ounces.

“We started in different areas and just kind of followed our gut the whole week just because conditions were changing,” Lenz says. “The water was warming up, and we knew the fish would be moving. We covered a lot of water.”

North Alabama started its morning fishing jerkbaits over main-lake structure to get a small limit and then went on the hunt for upgrades. Later in the day, once the sun got high in the sky, Lenz and Tate transitioned to fishing shade lines with a wacky-rigged Big Bite Baits Trick Stick.

“We’d throw it up in the shade and work it really slowly,” Lenz says. “We were catching staging fish – fish that were pulling out from the beds because the water was falling.”

Tate pointed to patience as the key ingredient in his team’s top-10 finish.

“Most of our bites weren’t happening quickly. They were coming on little finesse techniques,” he says. “I think that’s where we capitalized. We caught a lot of fish under docks with a slow fall. It seemed like they liked a subtle fall. That’s how we caught our bigger fish.” 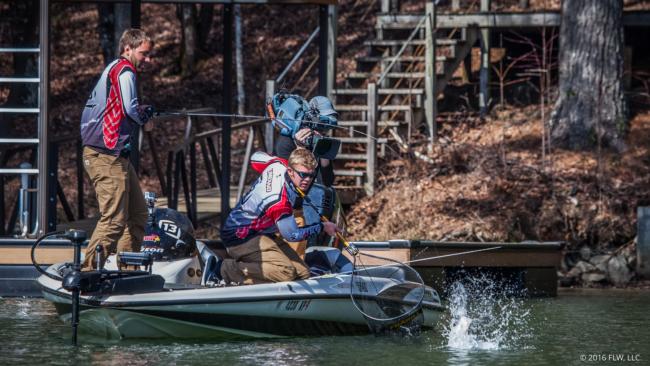 After topping the field on day two with 17 pounds, 1 ounce, the event’s heaviest sack, Bryce Wegman and Taylor Umland struggled with mechanical issues on day three and found only a small limit. They dropped to sixth with 34-14.

“Our boat broke down. We spun a prop around 9 o’clock, and we lost a couple hours of fishing,” Wegman says. “That really hurt us because we missed out on the morning bite. Also, the fish weren’t where they were the day before. I think it was the cloudy weather that had them spread out.”

The anglers ended up catching their fish on a War Eagle buzz bait and a shaky head with a Bizz Baits Dizzy Diamond Worm. Umland says that most of his team’s action came early in the morning before the breakdown.

Notably, Texas A&M’s Josh Bensema and Matt McArdle were fishing nearby and obtained permission from the tournament director to switch boats with Illinois State to allow the leaders the chance to fish out the rest of their day. Unfortunately, Wegman and Umland were unable to reestablish any consistency. 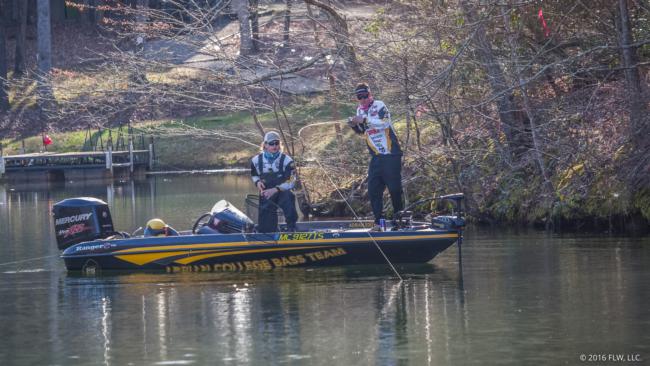 Belief in their plan got Adrian College’s Jarrett Martin and Jacob Bayer to the top 10, and the slightly windy and partly cloudy conditions of day three seemed to line up well for their tactics. However, with quality fish eluding them, they added a small final-day limit and finished seventh with 34 pounds.

Fishing Rapala Shadow Raps, Martin and Bayer started each morning on a main-lake hump before working a few smaller bars and points. On day three, their most productive area was a horseshoe-shaped bar system extending off a windblown riprap point.

“The fish could get down between those two humps and stay there and wait for bait to be blown overtop of them, and then they could come up and get it,” Martin says. “They were definitely there today [Saturday]. The big fish just didn’t eat for us.”

When they worked shorelines within pockets, Martin threw the jerkbait along docks, laydowns, etc., while Bayer slow-rolled a spinnerbait through the middle for any fish coming or going.

Martin says the key to his team’s jerkbait productivity was a rapid erratic retrieve. In Keowee’s clear water, giving fish time to inspect the bait was a guaranteed denial. Faster motions made the fish commit or lose. 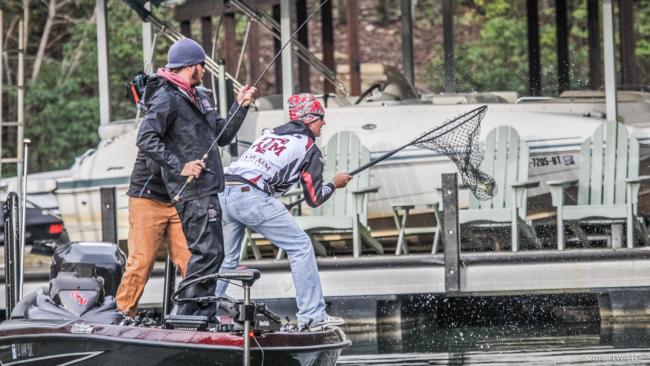 Josh Bensema and Matt McArdle got off to a strong start with a second-place day-one performance, but waning opportunities chipped away at their productivity, and the Texas A&M anglers settled into eighth place with 31 pounds, 7 ounces.

“In practice and the first two days, we caught a lot of fish on beds,” McArdle says. “A lot of them pulled up in the tournament for us, and we were able to catch the ones that were still on beds.

“We tried to do the same thing on day three, but we were on a dying pattern,” he continues. “We started out with a lot of bed fish early in the week, but it kind of dwindled on day three.”

The Aggies caught two of their day-three fish on windy points where a 6th Sense Crush Mini 25X square-bill and a Z-Man ChatterBait with a 4 1/2-inch Lake Fork Magic Shad trailer proved effective. As they traversed the banks, they kept watch for bed fish. McArdle managed to find one cooperative spawner, which fell for an Xcite Baits Raptor Tail Jr. Texas rigged with a red bead under a 1/8-ounce tungsten weight. 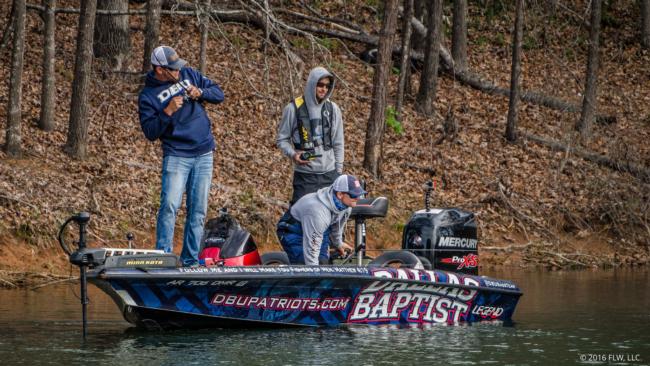 Dallas Baptist University’s Zackery Hines and Reed Foster led day one, but after catching only three keepers on the final day, they finished in ninth place with 30 pounds, 5 ounces. The DBU anglers did most of their work on bed fish, but also found several keepers by throwing swimbaits for cruisers. In the final round, time and fishing pressure caught up to them.

“Today [Saturday], we stuck to what we knew, so we went out there and threw the swimbaits and Flukes we were throwing all week, and Zack was on the bed fish with his Strike King Rage Twin Tail Menace Grub,” Foster says. “It didn’t turn out the way we wanted it to.

“Maybe we could’ve done better if we’d had another hour because our fish were in the afternoon,” he adds. “But no excuses; we had the fish on for a limit. It just didn’t fall for us.”

The DBU anglers had plenty of targets the first couple of days, especially those that yielded their limit of 15-3 on day one. They’d hoped to ride the wave into the third round, but quickly realized they were out of fish.

“Some of our spots were wiped out, so we had to run and gun and go look for new water,” Hines says. “When you start doing that you’re behind the 8-ball because you don’t know if you’re in productive water or not.”

For the two bed fish he caught, Hines prefers a white Menace so he can clearly see it and visually detect bites. 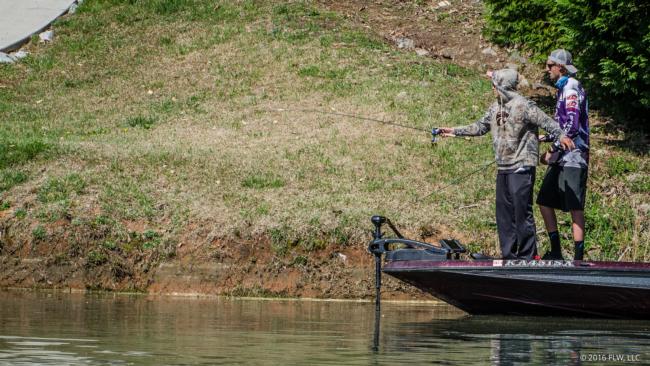 Day three was give-and-take for Lance Maldonado and Ethan Dhuyvetter. Unfortunately, Keowee took back all the opportunities she gave. Blanking in the final round, the Kansas State duo finished 10th with 25 pounds, 3 ounces.

Working docks with wacky-rigged Snack Daddy soft stick baits and finesse worms on drop-shots, as they did all week, they had their shots, but none of those fish took a ride to the weigh-in.

“We had a good start and several opportunities to put fish in the boat,” Maldonado says. “Ethan missed a 2-pounder on a wacky rig. We cast again to the same dock and missed another one. Two casts later, I lost a 4-pounder on a dock wire. We just went downhill from there.”