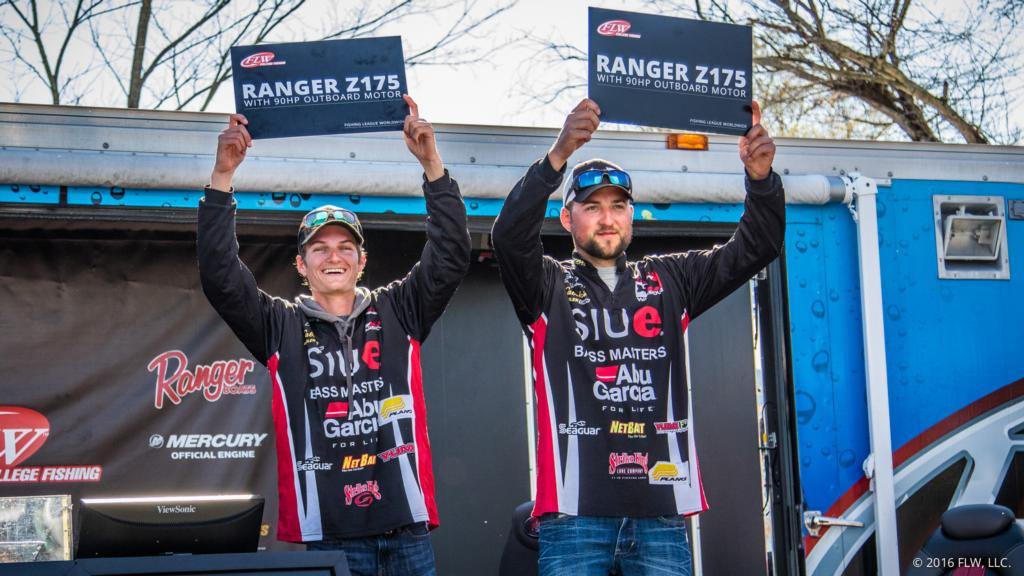 Zach Hartnagel and Dalton Wesley of Southern Illinois University-Edwardsville knew a good thing when they found it Friday in the opening round of the FLW College Fishing Open on Kentucky Lake, and parlayed it into a winning stringer in the second round. The Illinois anglers wound up with 35 pounds, 5 ounces to win the tournament’s title ahead of Bethel University’s Carter McNeil and Cole Floyd, who had 33-1. Dallas Baptist University’s Cold Benedict and Trent Newman capped their consistent two-day performance with a third-place showing of 32-6.

Ostensibly a Kentucky Lake tournament, the event might as well have been called the Open on Barkley Lake by Hartnagel and Wesley, as they caught limits of 19-1 and 16-4 fishing coves inside what the locals call Old Kuttawa Harbor on the north end of that Cumberland River impoundment. The two discovered the area Friday afternoon, and filling out a quick limit convinced them that it held the potential weight to guarantee a high finish. They were in third place after the opening round behind St. Ambrose University of Davenport, Ia., and Illinois State University. 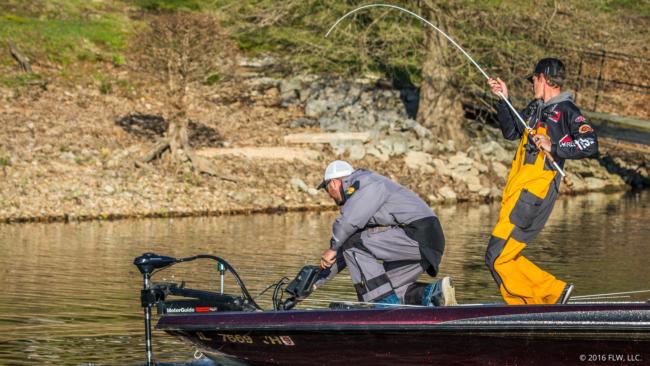 Reaching their spot Saturday, and returning from it to the weigh-in at Moors Resort & Marina in the midsection of Kentucky Lake was a bit of a boating adventure for Hartnagel and Wesley because of a blustery west wind that scoured the lakes and the canal that connects them. However, in between boat rides the Cougars had the advantage of being able to fish relatively still waters, while to varying degrees their competition had to deal with the wind-whipped bays of Kentucky Lake as best they could.

“We were worried about how bad the wind would be in there, but it really didn’t bother us at all,” recalls Wesley of the Lake Barkley hotspot. “We just went around and around because we knew the fish were there. They weren’t up for chasing after baits, though, so we had to slow way down.”

St. Ambrose University’s team of brothers Cole and Tanner Atkinson, who led Friday’s opening round, was victimized by the wind – both in reaching their fishing water near Blood River and in presenting crankbaits properly once they got there.

“The wind muddied up the water where we were fishing Friday and it was just too windy to properly fish the points where we caught our better fish on crankbaits,” says Tanner. “So we had to go to Plan B, except we couldn’t adjust and didn’t really have anything else going for us.”

Hartnagel and Wesley didn’t exactly mop up on bass either, but were able to take advantage of roving prespawn bass that moved along riprapped banks. The anglers had five bass when they left their best area at 12:30. Playing it safe, they decided to return early to the vicinity of Moors and then upgraded one of their smaller fish.

“We caught eight keepers on Saturday and seven on Friday,” notes Wesley. “The fishing was slower, and we had to slow down our retrieves. Also, there were two tournaments going on in Barkley, so we had to share the water with a lot of local fishermen. It took us a while to get that last keeper, but when we did I told Zach, ‘well, that’s all we can do; it’s up to the other teams now.’” 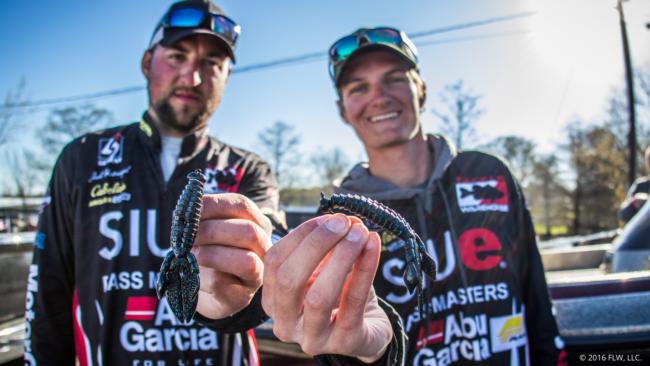 Hartnagel, who threw squarebills and “homemade” shaky head baits while Wesley used a Strike King Rodent (black and blue), says that the bass seemed to become active when the sun came out of the clouds periodically, but that the action dropped off to nothing when the clouds returned. The water where they fished was murky, but not muddied.

The biggest bass brought to the scales in the Open’s final round was a 7-pound, 15-ounce largemouth boated by James Kuhns of Bellarmine University. He caught it on a chrome Rat-L-Trap.

Saturday was a day of redemption for some of the teams that had faltered in the opening round, but also a day of disappointment for others striving to earn one of the 15 berths to the 2017 FLW College Fishing National Championship.

The teams that made it included: 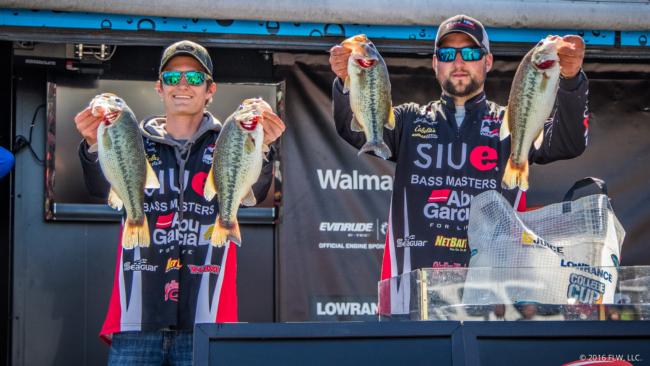