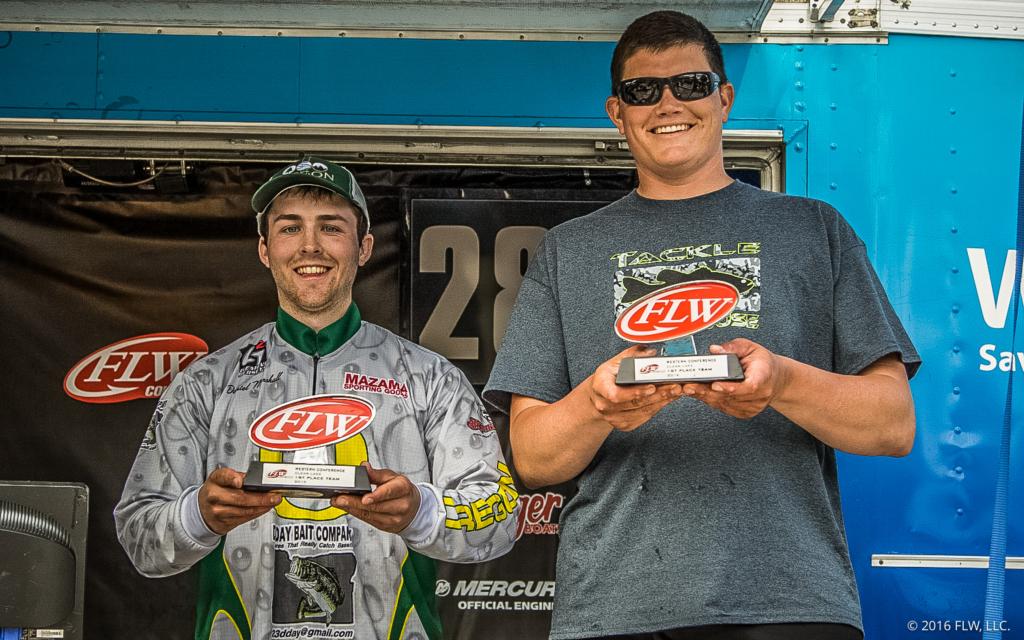 The huge 28-8 limit brought to the scale by the Oregon duo is the second-heaviest FLW College Fishing one-day catch of all time. The record for largest one-day catch is 29-5, and is held by the University of Louisiana-Monroe.

“This is a huge accomplishment for our program,” says Habenicht, a senior majoring in business. “It’s tough to raise money for club sports, so this prize will definitely help us down the road.”

“To be honest, I didn’t know we had the win until our weight was called,” says Marshall, a senior majoring in business. “To win this event makes a statement about the University of Oregon bass fishing team. It feels absolutely awesome.”

The duo says they spent the majority of their day in a creek channel near the takeoff ramp. Habenicht says they each used a green-pumpkin Yamamoto Senko and fan-casted their way along the edges of cover.

“There was a lot of vegetation, and the bass were up on the edges of it because it’s been so warm,” explains Habenicht. “Once the midday sun came out, it was like the bass came in waves. I bet we hit flurries every few minutes or so. Most of our biggest fish came between 10 a.m. and 1 p.m.”

Habenicht says the team hit about a dozen spots in the channel and caught between 30 and 40 keepers.

“I fished a tournament here in late March and ended up doing really well,” recalls Habenicht. “The warm temperatures over the last few days pushed the fish out to where I was catching them in March, so that was a huge advantage for us.”

Marshall adds that the two finished out their day on the north end of the lake running docks and seawalls using Senkos. Around 1 pm., they boated a 7-pounder – their biggest catch of the day.

“The big ones were up shallow on the seawalls and near the docks,” says Marshall. “With Ryan’s (Habenicht) knowledge of those key spots, we were really able to clean up. It was a great day.”

The top 10 teams that advanced to the 2017 College Fishing National Championship are: