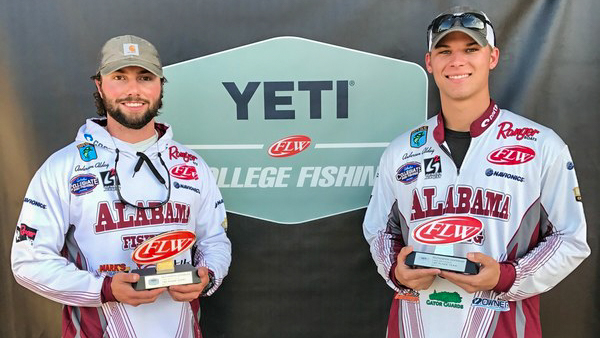 “Our goal coming into this tournament was to qualify for the National Championship and we did it,” said Aldag, a junior majoring in business finance. “It’ll be my first time competing at that event, and I couldn’t be more excited.”

“It felt absolutely incredible to win this one,” said Mattox, a junior majoring in chemical engineering. “It is great exposure for our club and a nice win on our team’s resume.”

The duo said they spent the beginning of their day at a deep hole in a stump field they had found in practice. The area was a 50-yard stretch of water on the south end of the lake.

“The hole was near a spawning area and was 25- to 30-feet-deep in the middle,” said Mattox. “The stumps were right below the surface. We used a Sexy Ghost Minnow-colored Strike King KVD Jerkbait, which is a little unconventional this early in the season. Not many teams throw were throwing jerkbaits because the fish aren’t active enough yet.

“Within minutes we had a couple of bass that weighed around 5 pounds, and then I hooked into one that was 9 pounds,” continued Mattox. “By 10 a.m. we had four fish that weighed about 20 pounds and we were shaking from excitement.”

Mattox credited the clear water within their stretch as the key to their success. He said the rest of the lake was muddy, and their baits wouldn’t have produced as much in those conditions.

“We finished the day at some matted grass in the same creek, but about a half-mile away,” said Aldag. “It was also fairly deep – about 13 feet down. We flipped the edge using a green-pumpkin-purple Strike King KVD Perfect Plastic Rodent, and made a couple of culls toward the end of the day.”

“It’s never worked out this well for us before,” said Mattox. “It was an amazing day for the both of us.”