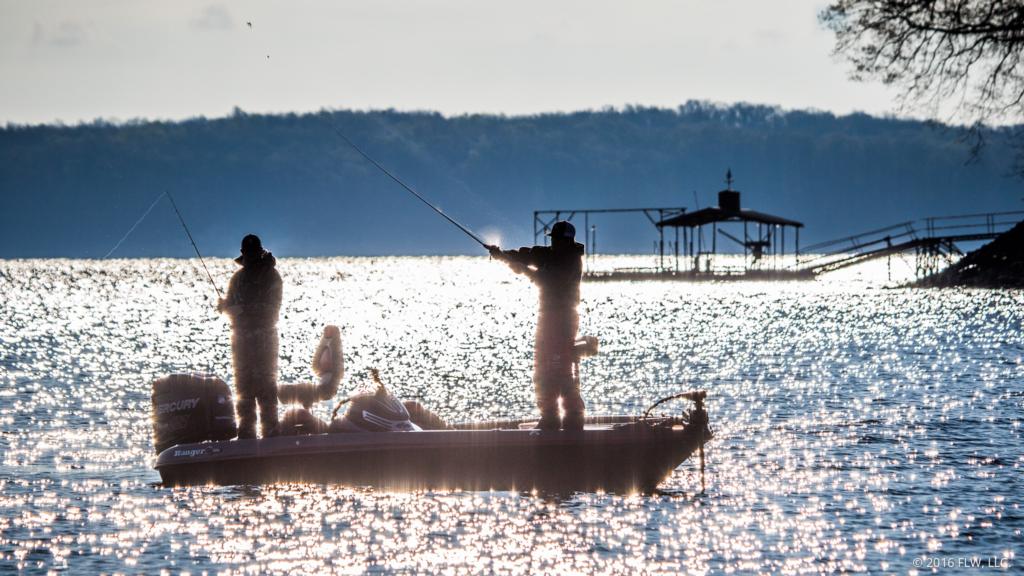 In these parts it’s known as “dogwood winter” and relates to any spring cold snap that coincides with the beginning of the annual dogwood bloom. Coincidence or not, the greening ridgelines that frame Kentucky Lake are peppered with blotches of white dogwood blossoms now. Likewise, the air temperature has dropped, and the front that roared across the region Wednesday evening into Thursday is expected to have a corresponding chilling effect – at least temporarily – on the two-day YETI FLW College Fishing Open set to begin Friday morning on Kentucky Lake and Lake Barkley.

Just how much and how long the weather affects the fishing remains to be seen, though for now the dozens of college teams entered in the event are likely more concerned with how much any gusting northwest winds trailing the front will hinder boat travel Friday morning. According to Brandon Hunter, a Costa FLW Series Central Division pro who also guides on Kentucky Lake, the weather might temporarily shrink the available options.

“Mainly what’s going to happen is that those fish that were moving up to spawn are just going to hang out where they are for a while,” says Hunter. “The water temperature earlier this week was way up in the mid- to upper 60s, so a lot of fish are laying up or suspending near the bank thinking about spawning, but not locking down yet. This latest front will keep them on that secondary stuff for a while longer.”

In Kentucky Lake’s case, “secondary stuff” refers to the secondary points and ledges at and inside the mouths of such landmarks as Pisgah Bay, Sledd Creek, Smith Bay, Jonathan Creek, Blood River and any of the dozens of coves that jut into the shorelines on either side of Kentucky Lake like jagged teeth. Anglers also have the option of running to Lake Barkley through the canal that connects the two impoundments, but Hunter thinks there are enough largemouths between Kentucky Dam and the Aurora (Highway 68) bridge to keep the college contestants closer to home. The tournament is being staged at Moors Resort and Marina near the lake’s northern end.

“There’s been a smallmouth spawn going on sporadically on those sandy, pea gravel banks, though it’s nothing to count on,” continues Hunter. “Some good kicker smallmouths are probably going to get caught [in the Open], but that’s a pretty random thing. Mostly it will be the guys who get on the better largemouths along those secondary spots that will do the best.”

According to Hunter, probably the lures that will produce the most bass will include lipless crankbaits, shallow- to medium-diving crankbaits, swimbaits fished on umbrella rigs, buzzbaits, shaky heads and jigs. Hunter also thinks that topwater poppers and wake baits might account for a few bank cruisers in the back ends of coves, especially on Saturday when the weather is expected to return to its springlike demeanor.

“If I was fishing, I’d just go down the bank until I hit some fish and then maybe slow down and fish jigs and shaky heads,” adds Hunter. “The water level is at about 355 feet [about 4 feet under summer pool], so there’s not going to be any flooded bushes or anything like that. The majority of the fish will be hanging out on chunk rock in 8 to 10 feet of water – at least for a few days.”

Last year’s Kentucky Lake Open attracted 203 teams from throughout the eastern United States, making it the biggest event up to that time in the program’s history. That number has since been surpassed by the 248 teams that competed in a Southeastern Conference event on Lake Guntersville earlier this spring. Still, YETI FLW College Fishing Tournament Director Kevin Hunt expects this year’s event could draw more as it is the last opportunity of the season for Southeastern Conference teams that aspire to fish in the 2018 YETI FLW College Fishing National Championship. The top 20 teams in the Open, plus one team (beginning with 21st place) for every 10 entered beyond 200, will earn a ticket to the championship.

Southern teams aside, the Open is likely to attract several squads from Northern schools that want to qualify for the National Championship through any venue available. In 2016, the team of Dalton Wesley and Zach Hartnagel of Southern Illinois University-Edwardsville (35 pounds, 5 ounces) got by Bethel University’s Cole Floyd and Carter McNeil (33-1) for the win. According to Hunt, Wesley and Hartnagel will defend their title this year.

Team registration is set for Thursday from 3 p.m. through 5:30 p.m. Takeoff at Moors Resort and Marina begins at 6:30 Friday and Saturday morning, and the weigh-in at Moors will commence at 2:30 p.m. each day.