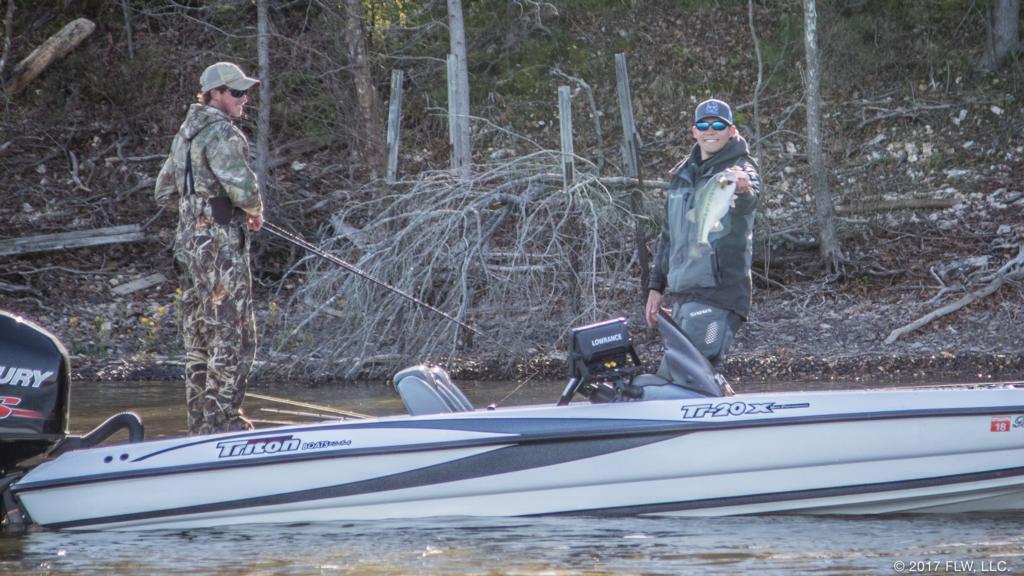 While the fortunes of other teams fishing the YETI FLW College Fishing Open on Kentucky Lake rose and fell with the winds that whipped the lake last weekend, UT Martin’s steady performance earned it the championship with 44 pounds, 4 ounces.

Still, it was no runaway, as several teams made it close and kept the Skyhawks’ Dylan True and Matthew Lamastus fishing their best. Here’s a look at how it played out for the rest of the top 10. 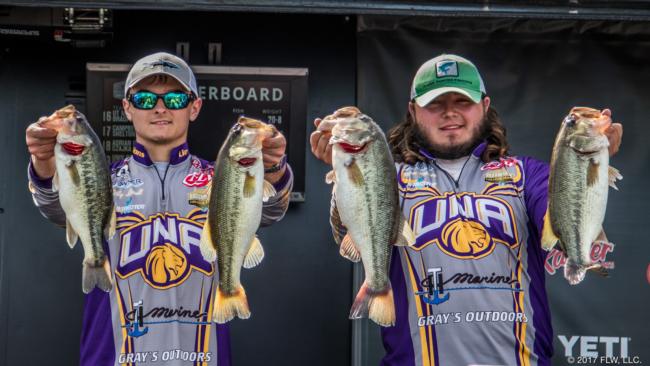 Runners-up Koby Littrell and Martin McCravy were among the most consistent anglers in the event, and it showed in their results. The UNA anglers were in seventh place after the opening round with 20-8, and then finished strong with a 20-pound limit on day two that gave them 40 pounds, 8 ounces overall.

Littrell and McCravy caught nine keepers in the first round by fishing Texas rigs and shaky heads, but swapped tactics and locales on day two as the weather cooled and the fish became more lethargic.

“Between the lower temperature Saturday and all the extra boats that were out fishing, we couldn’t really get anything steady going in Sugar Bay, so we moved to Jonathan Creek,” says Littrell, a sophomore accounting major. “Then it was all dragging a jig or slow-rolling a spinnerbait. The fish also seemed to be in deeper water from where we caught them the first day.”

McCravy, a sophomore geography major, says the pair culled twice in Jonathan Creek as they used a War Eagle Finesse Jig (peanut butter and jelly) with a Strike King Menace Grub trailer. The chartreuse spinnerbaits they used weighed an ounce.

“We lost a fish the first day and another the second that would have helped us,” recalls McCravy, “but I guess just about everybody could say the same thing.” 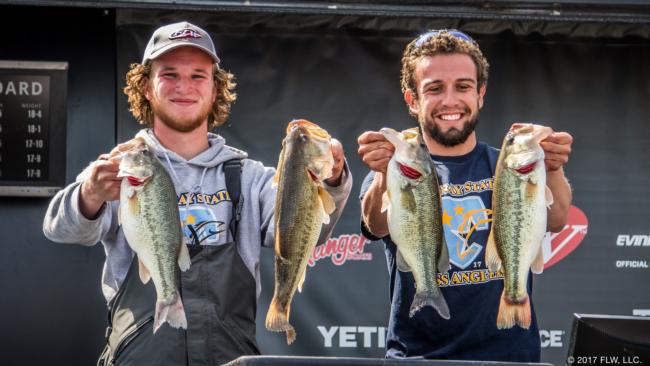 Nick Montilino and Brock Spencer ran all the way to Little River in Lake Barkley on day one and returned with a limit that totaled 24-3 and was anchored by a 6-pound, 13-ounce largemouth and a couple of 5-pounders. Their bag was good enough for second place behind UT Martin, and the Racers figured they had little choice but to make the long run again on day two. It proved to be a good move, but the quality of their fish couldn’t be duplicated, and they returned with 15-12 for a total of 39-15.

“We hit one place in Jonathan Creek [on day two] before we left for Barkley, and got a small keeper there,” says Montilino. “The fishing was a lot tougher, and we had to slow way down to get bites. We left our best spot at about 1 p.m. and hit a random laydown on the way back. That’s where we got our last keeper.”

All 10 of the team’s keepers were caught on jigs – a 1/4-ounce Outkast Tackle R.T.X. Jig or a Spenceanator Jig (made by Spencer’s uncle) with a green pumpkin Strike King Structure Bug (green pumpkin) trailer fished on 20-pound-test Seaguar fluorocarbon.

“For the most part, we flipped laydowns in Little River,” confesses Montilino. “I caught the 6-13 dragging it down a bank on a rocky point, but the rest of the time we were flipping.” 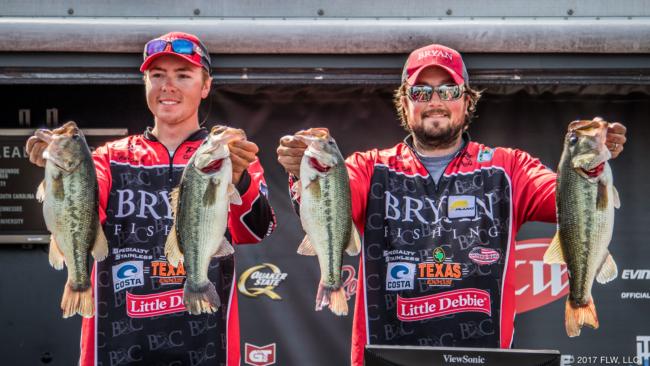 4. Bryan College makes a big jump in the standings

Nathan Bell and Cole Sands composed one of seven teams that made the road trip for Bryan College, and they were rewarded with a fourth-place showing with 36-12. These Lions from Dayton, Tenn., were among the relative few whose catch actually got better on the second day. They were in 34th place with 15-15 in the opening round, but then brought in the heaviest limit, 20-13, on day two.

“We caught our fish mainly by cranking the first day with Strike King 1.5s, but they weren’t nearly as aggressive Saturday morning,” recalls Bell. “First off we caught two good ones cranking, but they just barely had it. We lost a couple of giants that would have given us a monster bag. So we slowed down and fished MGC Sniper flipping jigs with Rage Craw trailers (green pumpkin) and Texas rigs with Zoom Baby Brush Hogs (green pumpkin blue flash). We were able to cull a 2 1/2-pounder before we wound up with the limit we had.”

Like Montilino and Spencer of Murray State, Bell and Sands ran from the tournament takeoff at Moors Resort and Marina on the west bank of Kentucky Lake to Lake Barkley. They had what Bell describes as “an outstanding practice” in the area of Saline Creek and were determined to return Friday morning despite gusting northwest winds.

“We didn’t get down there until 9:30 Friday morning, and we fished for about two and a half hours before leaving,” says Bell. “It was so rough we didn’t want to risk getting back late. Cole and I decided we were going to head back as soon as we got our limit. It was 52.7 miles of rocking and rolling.” 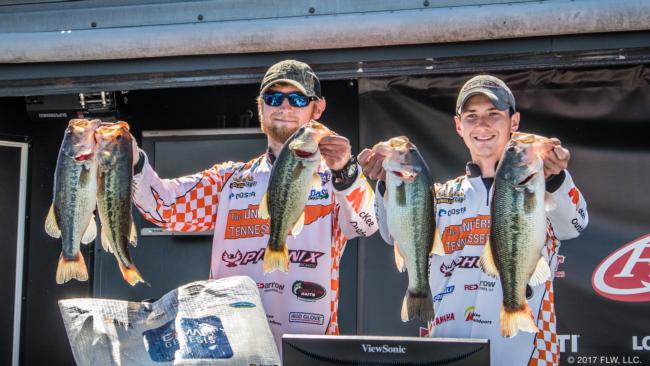 Bradley Devaney and Saxton Long were in 15th place after the opening-round weigh-in with 17-9, but as other teams faded on day two, the Vols demonstrated that catching fish consistently is what counts the most in multi-day events. Their limit of 17-12 in the championship round boosted them to fifth place.

The anglers’ fishing approach was fairly basic: On Friday, they stayed in the mid-lake area and fished jigs along laydowns and rocky secondary points in three areas. Saturday, they switched to Carolina rigging soft-plastic crawfish to catch their limit. 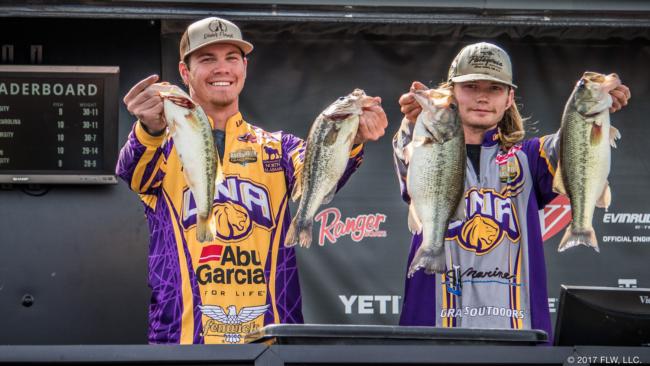 SIU-Edwardsville won the 2016 YETI FLW College Fishing Open by fishing the upper reaches of Lake Barkley, which helps explain why so many of this year’s roster returned there to seek their fortunes.

North Alabama’s Austin Mize and Ethan Goodwin were among them, and, while other competitors abandoned crankbaits in the tournament’s second round, the pair stuck with cranking both days to catch limits of 18-11 and 15-14 to wind up with 34-9. Their weapons of choice were Rapala DT-6 crankbaits in hot mustard.

“We keyed on any riprap we came to,” says Goodwin. “We fished around marina breakwaters and points where riprap had been dumped. It wasn’t fast, but we did manage to cull twice on Saturday.” 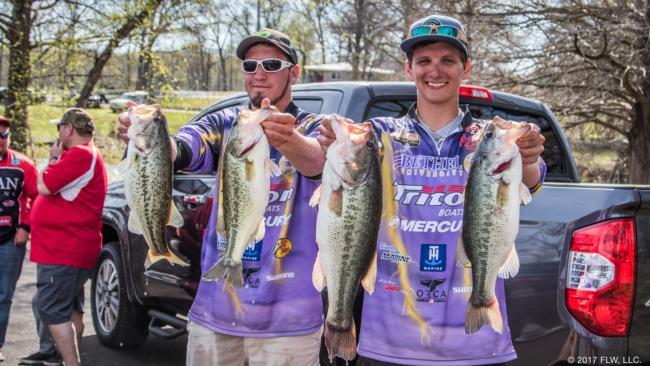 Though various mishaps and breakdowns befell some of the competitors, what happened to Tyler Black and Ryan Winchester might have been the topper. Though they caught a limit of bass in the final round, it didn’t make it to the scale. Unfortunately, as the teammates were hauling their bag of fish along the dock, one side of the bag slipped out of the grasp of one of them and spilled a 6-pound-class bass back into the water. The four remaining fish weighed 16-14 and, with their limit of 17-2 the first day, gave Black and Winchester 34 pounds.

Black says Strike King Red Eye Shad lipless crankbaits accounted for most of their fish, which came from patches of grass on the south end of Kentucky Lake near the Danville, Tenn., area. 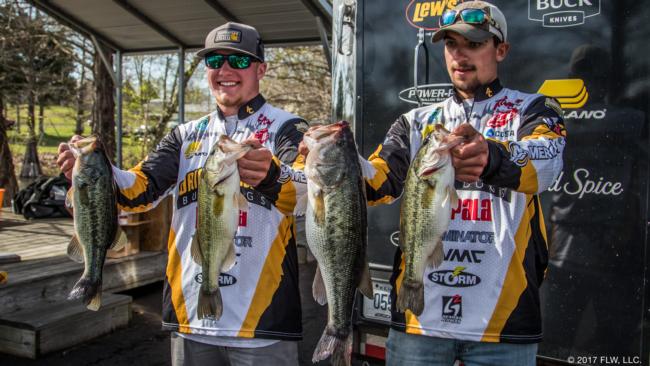 8. Adrian College scores one for Michigan

Though many of the topfinishers in the tournament spoke with a Tennessee twang, the Bulldogs of Adrian College in Michigan managed to snag a spot in the top 10 with 33-10. Nicholas Czajka and Jack Hippe III had 19-1 in the opening round that put them in eighth place, and then held on to that spot on day two with 14-9.

Given their limited experience on Kentucky Lake, the pair fell back on a proven pattern: They fished secondary points midway back in coves and pockets, figuring that most fish were still moving up.

“We just junk-fished,” admits Czajka. “We threw a lot of different crankbaits and soft plastics at anything that looked good and caught one here, one there. There wasn’t any particular time when they bit best, either. The afternoons were about like the mornings.”

Ho-hum, but it’s on to the 2018 YETI FLW College Fishing National Championship for them. 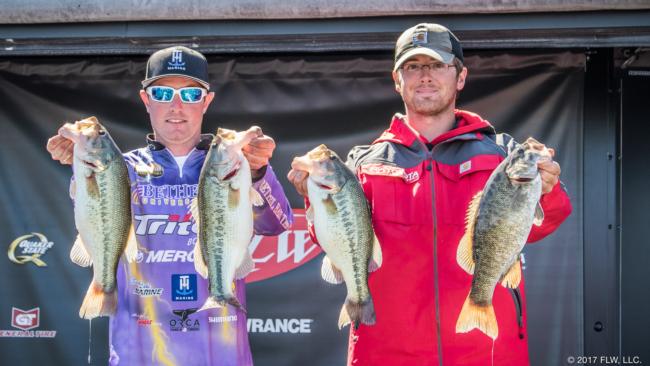 9. Quantity without too much quality limits Bethel team

Bethel’s Brian Pahl told Friday’s weigh-in crowd that he and partner John Coble Garrett had their limit within about 15 minutes, and then they went elsewhere on the south end of Kentucky Lake to cull. That limit gave them 17-10 and put them in 13th place. In the final round, they returned to their spot, but the fish had moved to parts unknown. The pair finished with a limit of 15-6 and 33-0 for the tournament.

“We found a good school of fish, and it didn’t take long either day to catch a limit,” notes Pahl. “For some reason, though, we couldn’t get on any better fish Saturday. Finally, we moved around and were able to cull two or three times, but just in ounces. We didn’t get the kickers we needed.”

A Strike King KVD 2.5 crankbait was their best producer. 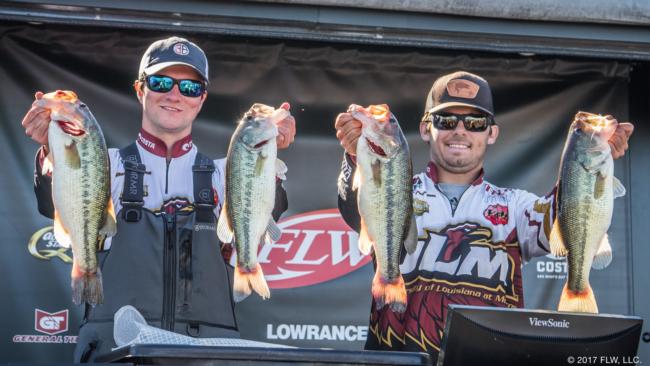 Thomas Soileau and Hunter Freeman of the University of Louisiana-Monroe were in 12th place Friday with a limit of 18-1, then returned with a 14-12 limit on day two to place 10th overall with 32-13.

The Warhawks sought their fortune in the area of Kentucky Lake south of Paris and wound up dragging V&M Wild Thang Worms (green pumpkin) and creature baits behind a Carolina rig. Nothing fancy, but it got them into 2018’s Big Dance.