Brannon, Walters in Front at Wheeler 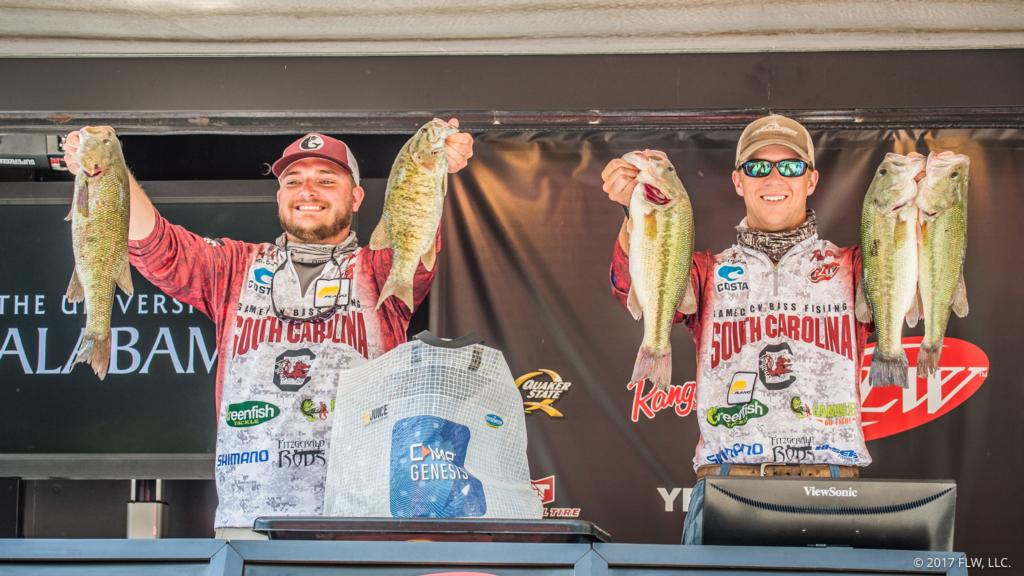 The University of South Carolina’s fishing teams are starting to make themselves very comfortable inside the winner’s circle of the YETI FLW College Fishing National Championship. After carrying two back-to-back championship trophies to Columbia in 2015 and 2016, it looks like the Gamecocks are back for perhaps a third title in a row in this year’s event, which is presented by Lowrance C-Map Genesis.

Specifically, South Carolina team members Patrick Walters and Gettys Brannon, who won the National Championship in 2015, are looking to take another victory lap for the Gamecocks.

Today, Walters and Brannon bagged up 17 pounds, 3 ounces of Wheeler Lake bass to take an early lead over Bethel University’s Evan Owrey and Kristopher Queen by a scant 8 ounces.

Obviously, this South Carolina team has plenty of experience in the FLW College Fishing limelight, and its focus and composure are reminiscent of the demeanor of top-level pros on the FLW Tour.

The team members never denied playing the Tennessee River’s main-river currents for their success today and admitted that the offshore game is their bread and butter.

“We caught them pretty early,” Brannon says. “We had most of our weight by 9 a.m., and after 10 o’clock it got brutally slow.”

“We’ve got 10 or 12 spots we are rotating through,” Walters adds. “And each spot gets hot at a certain times. So it’s a matter of timing it right so we hit several spots in a row when they’re hot.”

“We know we have to stay disciplined in our approach, and we did that pretty well today,” Brannon says.

“Disciplined in that we have to keep throwing the right baits that will earn a quality bite,” Walters says, finishing his partner’s thought and proving just how in synch the two previous champions are when it comes to team fishing at the collegiate level. “We have to resist the urge to throw other stuff we know will get a bite, but will not help. Sometimes we go through long lulls with those right baits, but when we get a bite on them they [the fish] are the right size.”

Needless to say, the well-oiled machine of Walters and Brannon looks to be firing on all cylinders so far at Wheeler Lake.