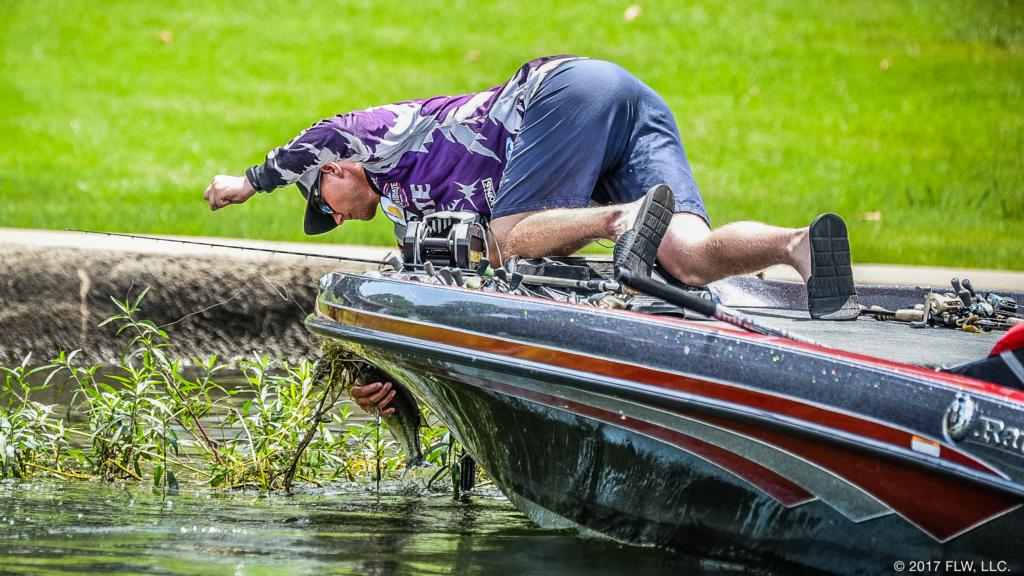 This story will be updated throughout the day with more from theYETI FLW College Fishing Fish-Off on Wilson Lake.

That's it for the 2017 Fish-Off updates. To see who earns a spot at the Forrest Wood Cup, join us for weigh-in at McFarland Park in Florence, Ala., beginning at 3 p.m. CT, or log on and watch FLW Live right here at FLWFishing.com.

Alsop has landed several short fish here recently, but nothing else to improve his weight. He's now working back through some areas that he fished previously, in hopes of uncovering another cull fish. 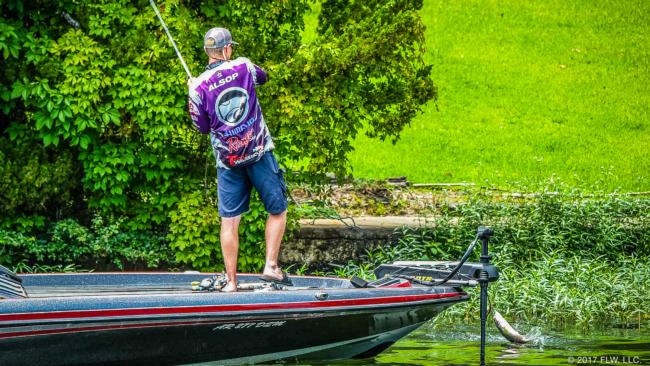 We'd barely finished making the last update when Alsop popped another keeper out of the grass of McKiernan Creek. That one culls and adds about a pound to his total. He's definitely in the lead now.

We just checked in with another of Blenn's observers, and he says Blenn could have as much as 7 pounds, though he believes it's more like 6 1/2. Sounds like they're separated by ounces. 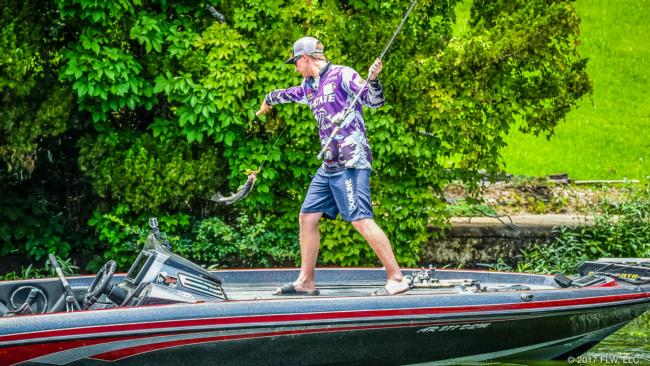 A couple missed fish … some headshaking … a solid 2-pound keeper … another missed fish … more headshaking. So goes Alsop's last 10 minutes or so. That keeper gives him five and, by our estimates, the lead at 7 1/4 pounds to 6 pounds. He's pitching a creature bait around docks and grass.

All that being said, it's very difficult to estimate these modest keepers accurately. Our reporter said Alsop's latest keeper "could be" 2 pounds. If he's off by a few ounces, then this could be even closer. Either way, one good keeper could sway the entire competition in either angler's favor.

Fishing has slowed to less than a trickle on Wilson Lake. Alsop is visibly frustrated. He still lacks one keeper for a limit, and that difference right now, by our estimates, is what separates him from Blenn and a shot at the Forrest Wood Cup. Alsop missed a fish just a moment ago, too. According to our on-the-water reporter, he's looking a bit perturbed. Blenn, on the other hand, has been relaxed all day. "Happy go luck" is how another reporter described him. Perhaps Alsop's dreams of going to the Cup are a little more vivid, the opportunity a bit more critical to the vision of his future fishing career.

Alsop made a pretty good run north on his latest move. He's back almost to the Wilson Dam. He started deep on the spot, dragging a Carolina rig, but is working his way shallow.

Blenn gave up on the offshore bite. He's back to flipping docks now, too. There have been no keepers caught now for about an hour and a half.

After making a short run north, Alsop has returned to some shallow water to fish docks. He's been pretty consistent with his back-and-forth approach, swapping ledges for docks, docks for ledges every hour or so.

Sticking with the offshore pattern, Blenn has headed upstream nearly to Wheeler Dam's tailrace area. He did some graphing and is now casting on a ledge.

Alsop headed south from the ledge spot where he started the morning. He is now fishing a little offshore community hole.

The Carolina rig is back in his hand.

This morning, Blenn said that once he got a limit shallow, he was going offshore to hunt big smallies. Well, he's out there now, five fish in the box, dragging a Carolina rig.

Alsop caught another fish, but it was too short to keep.

Alsop has moved out to a main-lake point. He's still working emergent grass. His latest catch was a short fish that he quickly tossed back.

Blenn is hopping around a lot, still fishing shallow and basically hitting whatever looks good in front of him. 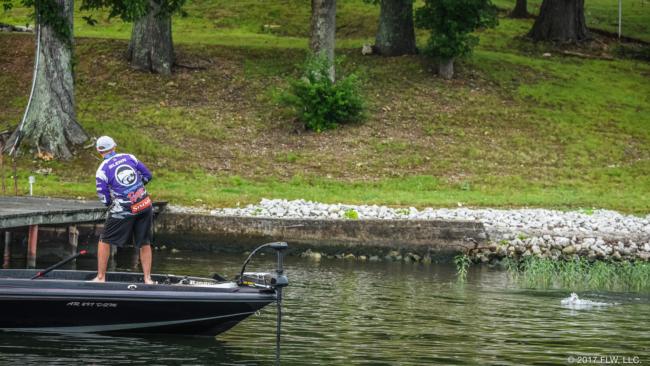 A 1-pounder apiece for Alsop and Blenn has them both improving, but the gap staying about the same. Blenn has a limit for roughly 6, 6 1/4 pounds. Alsop has four for 5 3/4 pounds.

A barely keeper for Blenn's fourth has him sitting at about 5 pounds, maybe 5 1/4. He's up, but not by much.

Fluffy white clouds are parting over Florence, and a beautiful blue sky is showing through between them. However, there's quite a bit of grey in the sky off to the west. In fact, a little rain has fallen on parts of Pickwick, where the final day of the All-American is underway.

Alsop is still on the bank, slinging his frog around. He has had three decent bites on it but has ripped the frog away each time. He just landed a dink on a creature bait that barely kept. That's his third for maybe 4 1/2 to 4 3/4 pounds.

Blenn is idling into the back of Shoal Creek. He's covered a fair amount of water so far. 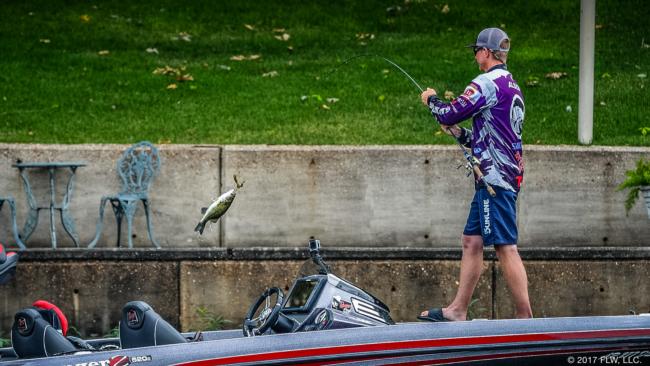 Alsop just landed a 1 1/2-pounder that bit a creature bait pitched up shallow. He's got two keepers now to Blenn's three but only trails his team partner by about half a pound.

It looks like Blenn is back where he belongs. He's frogging again, and just put his third keeper in the boat. He's in front by about 2 pounds with 4 1/2 total.

Blenn's offshore exploration was short-lived. He's back to the shallows now. He never even made a cast "out there."

About the time Blenn moved offshore to graph, Alsop left his offshore spot and ran to the bank. He's chucking a buzzbait now. Maybe the moving topwater will be the ticket to cover water and catch a bass out hunting in these overcast conditions. He's using a black buzzbait with a black toad around emergent grass and mixes in a few pitches with a creature bait now and then, too.

It's been all shallow for Blenn so far, but he's made a change and is graphing some offshore structure.

The temp is gradually rising, and there's not much of a breeze. The sun is just starting to burn through the clouds, but it'll probably remain slighly overcast most of the day, per the weather forecast. The lack of a bright sky might be part of the reason why the frog bite isn't exactly on yet. Bright sunshine would put those fish in the shade in predictable spots.

Travis Blenn strikes back, but it's not a very big blow. He just put a line burner in the box for his second keeper. 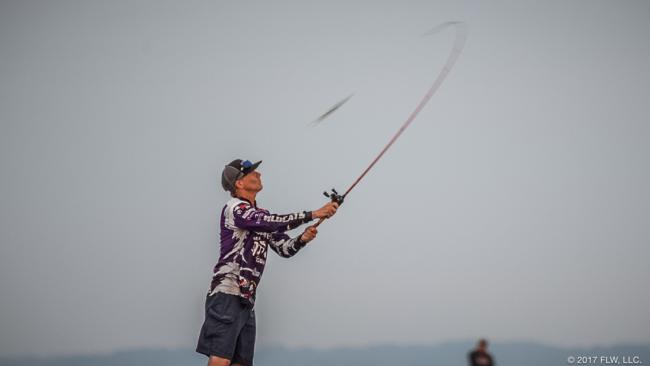 Alsop swung and missed on his second bite of the morning. He's still on the same spot as where he started, but he's moving around on the drop-off edge a little, trying different angles to attempt to get the fish to activate. 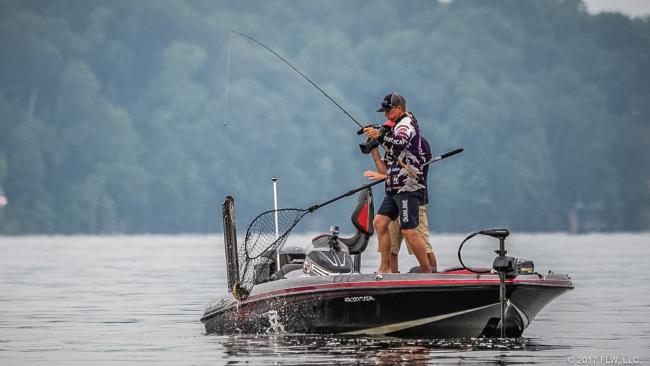 Alsop is working his offshore spot with a rig still, and it just worked for his first keeper. It's a largemouth that looks like it'll go about 2 1/2 pounds. That puts him barely ahead of Blenn. 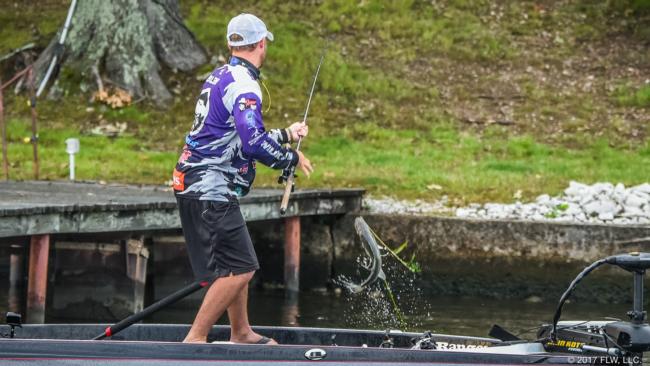 Blenn started the morning running shallow pockets and slinging a frog to shallow grass and seawalls. He put a 2-pounder in the boat literally within minutes of takeoff.

Alsop ran up the lake about two-thirds of the way to the dam and is dragging a Carolina rig on a main-lake point.

On a cool, calm morning at Wilson Lake in Florence, Ala., Kyle Alsop and Travis Blenn launched brand-new Ranger boats into the water for what could be the most fishing tournament in one of their lives. Only one, because today is the YETI FLW College Fishing Fish-Off, where the two newly crowned collegiate national champs and fishing head-to-head for a spot at the 2017 Forrest Wood Cup at Lake Murray.

For aspiring tournament professionals, the exposure and experience of competing in the Cup could open a lot of doors with potential sponsors and industry folks. Plus, even the last-place finisher at the Cup earns $10,000, so today’s winner is guaranteed a payday come August, when the Cup goes down in South Carolina.

Wilson is a small reservoir at only about 15,500 acres, but it’s home to some giant smallmouths. The tailrace area behind Wheeler Dam, on the opposite end of the lake from where the anglers launched at 6:30 this morning, is a particularly well-known fishing spot for big brownies.

The champs say they put in a few practice hours on the lake last Saturday prior to the college championship practice period on Wheeler. They practiced together and were able to locate a few offshore holes. That’s where Alsop plans to start the day, per an agreement beforehand that he would get the offshore spots. 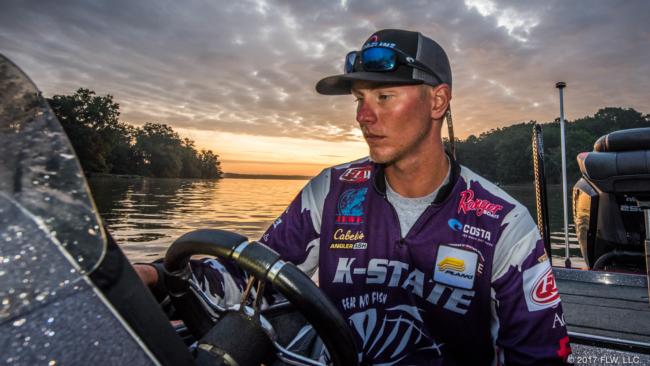 “We caught a few fish,” Alsop says of he and Blenn’s practice outing. “It’ll be interesting to see how it goes.”

Blenn has a slightly different plan. With more than a half-dozen rods but fewer than 10 ready to go, he’s planning to junk it up shallow to start.

“I’ll probably just run around and hit a few of these pockets,” he says. “They all have some depth to them.”

Grass, rock, laydowns, seawalls – they’re all likely targets for Blenn. The plan is to get a limit, then go offshore and hunt some big smallmouths. 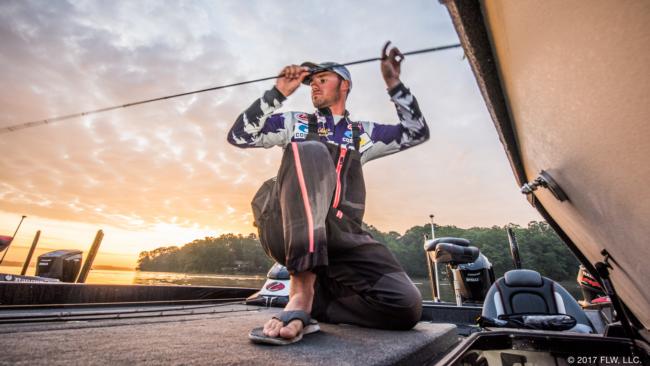 One team, two anglers, two plans of attack – but only one will walk away from today’s Fish-Off a Forrest Wood Cup qualifier.

The anglers check in at 2:30 p.m. CT at the ramp adjacent to the south end of Wilson Dam. They’ll weigh-in at 3:25 p.m. at McFarland Park in Florence. Tune in to FLW Live to watch.