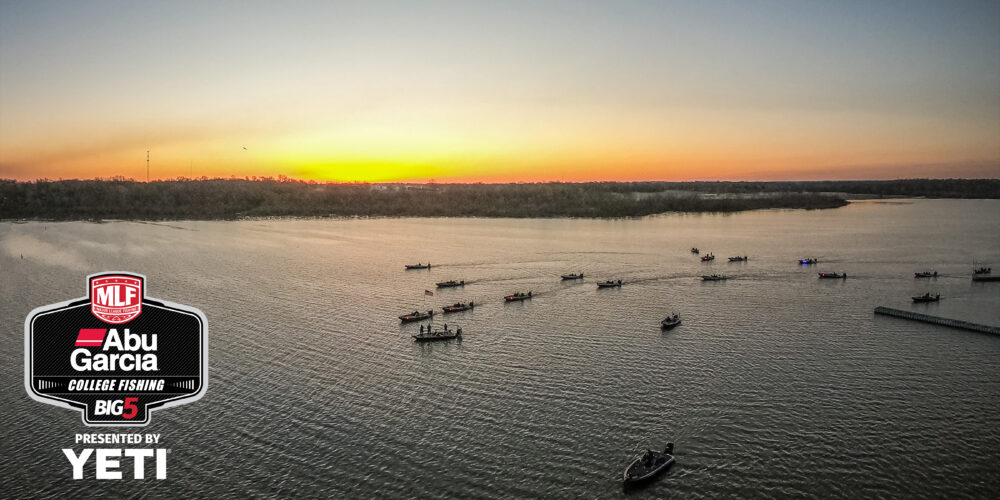 Grand Lake can be phenomenal to fish in the month of March, but fresh off a historic cold front, the anglers in the 2021 Abu Garcia College Fishing presented by YETI National Championship will have their work cut out for them. The event, which is presented by Lowrance, should still showcase some good fishing despite the lake being iced over little more than a week ago, and will certainly make whoever is crowned champion earn it.

With 150 teams qualifying to compete for the top prize of a new Phoenix 518 Pro bass boat with a 115-horsepower Mercury outboard worth $33,500, plus the honor of being National Champion, there’s a lot on the line – and not just for first place.

Grand Lake O’ The Cherokees (more commonly referred to as Grand Lake) is situated in northeast Oklahoma among the foothills of the Ozarks. The impoundment was created in 1940 when the Pensacola Dam was finished along the Grand River. The 46,500-surface-acre reservoir now hosts plenty of recreational opportunities, but more importantly, it’s also home to some of the best bass fishing in the country.

Being that Grand Lake is found in the Ozarks, the predominant structure on the lake is rock. Aside from various types of rock, docks and wood found in the form of flooded bushes, laydowns and brush piles are found fairly commonly throughout the lake.

Considering a large portion of Grand was ice-capped not long ago, it’s fair to assume the bite could be slow, with water temperatures well below where they should be for this time of year. However, Tackle Warehouse Pro Circuit pro Kyle Cortiana knows Grand Lake well and says there are pros and cons to the recent weather.

“I love fishing Grand in early March,” Cortiana says. “It’s honestly my favorite time to go there. You can throw a spinnerbait, jig and crankbait and catch fish that are big, fat and eating really well. Obviously, this record weather is going to make things different and more like a winter derby.

“One thing that’s true with Grand over the years is that when we get weather where you can’t fish it for a while, when you get back out there, they bite really good. Those fish haven’t been pressured for two weeks. They should bite. Fishing was really good before the freeze, with 20-pound bags winning local stuff, and I suspect that’ll pick up where it left off.”

The other positive that Cortiana points out from the recent cold snap is that it should make it easier for teams to break down Grand to dial in on a pattern.

“Most of the fish should be on the main lake or halfway back in the creeks,” he adds. “Right now, your major creeks are going to be thawed out in the middle, but shallower, narrow cuts are still completely froze over, so finding south-facing banks or docks with black floats where water warms up the quickest will be a good place to start looking.

“I don’t see the water temp getting into the 50s too quick, so fish will be suspended around docks and hanging off 45-degree banks and bluff ends.”

This tournament likely won’t be a prespawn catchfest, but instead, Cortiana believes Grand will still kick out the 3- to 5-pounders it’s known for.

“I think it’ll take anywhere between 18 and 22 (pounds) a day to win,” Cortiana posits. “They’re going to have to catch them up there.”

While there are many choices for catching prespawn bass on Grand, Cortiana says there should only be one thing teams throw all day.

“An umbrella rig is going to be a big player,” Cortiana says. “That, and a jerkbait. But I bet most of the fish will be caught on an A-rig.

“The only thing that could hurt that A-rig bite is if the water gets really dirty. With things melting, the lake has been getting dirty, and if it doesn’t clear up, that bite will shut down.”

Flat-sided or balsa crankbaits like a Rapala DT6 or Shad Rap will also be producers, according to Cortiana.

“I’ve had some really good days with a Shad Rap on a spinning rod this time of year, so I wouldn’t be surprised if some teams catch them on that,” he says.

Still, you can’t count out Grand staples like a spinnerbait (which helped Jeremy Lawyer win the Pro Circuit event back in 2019) and jig to put bass on the scale.