Mark Daniels Jr. on Punching: “Nothing Makes Me Happier” 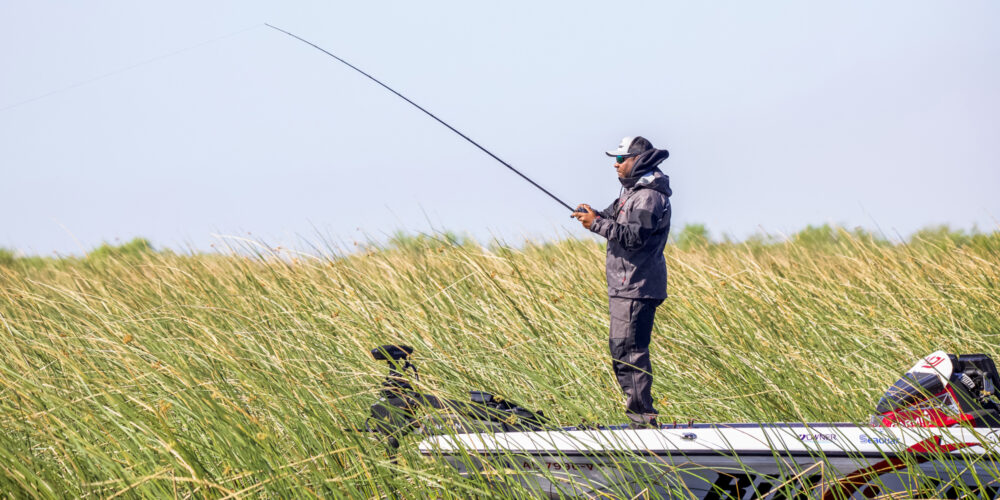 Every bass angler has a technique or two that they love to do. It may fit into their biggest strength or fishing style, or maybe they just enjoy that bite more than with any other technique.

For Alabama-based MLF pro Mark Daniels Jr., punching matted vegetation is his “thing” and he’d choose that technique over anything else if the fish were willing.

The Love of Punchin’

Daniels grew up fishing the famed California Delta, the birthplace of punching and home to expansive matted vegetation that makes it perfect for the technique. Early in his pro career, Daniels scored a 2014 FLW Series win the Delta, a tournament in which punching matted hyacinths accounted for every ounce of the 72 pounds, 7 ounces he brought to the scales in that event.

As Daniels stated in a recent blog about his introduction to punching, he was first introduced to the technique in the late 1990s and has loved it ever since. And in the years since – as Daniels has competed (very successfully) around the country – he’s taken the technique everywhere he goes.

“Nothing makes me happier than punching,” Daniels admits. “It’s the unknown because you never know what’s under that mat.”

While Daniels says punching can be a viable technique any time of the year, he admits that it shines brightest in the prespawn and postspawn periods.

“It’s most dominant in the prespawn, when the big females are under the mats trying to warm themselves up to further the process of getting their eggs ready,” he says. “That’s Mother Nature at work. The smaller males are scoping out areas and looking to build nests. I believe that’s why you can catch so many big ones punching.

“It’s usually really good until they start spawning,” he says. “Then it picks up again after the spawn and will remain good all the way into fall.”

Daniels has experienced this phenomenon from California to Florida – basically everywhere in the country where overhead cover exists. And just about any cover can be a spot for punching. Vegetation is the biggest target, but anything that forms a mat on the surface is fair game.

“That’s usually going to be one of two things: either an emergent grass or one that floats on the surface like hyacinths, lily pads, or primrose,” he shares. “The emergent grass like coontail, milfoil, and hydrilla are other options. Both types can be excellent.”

The key, like everything else in bass fishing, is finding the right location.

“All grass and mats are not created equal,” Daniels says. “You want to look for what I call the ‘starts’ and ‘stops’ of grass to get to the high-percentage areas. Places where two different types of grasses meet, or the beginning and end of a long mat are key places.”

In addition to just finding a mat to punch through, Daniels is looking at the entire picture.

“Most of the biggest bass will want some access to deeper water and may be on deeper mats,” he says. “You might be catching 2-pound fish in 8 inches to 2 feet of water and the bigger ones will be sitting in 2 to 4 feet of water. There are always exceptions, but that holds more often than not.”

Everything that Daniels uses when punching vegetation comes down to efficiency. His goal is to get through the mat as many times as he can in a day to up his odds at catching more fish.

“I think many people overthink the bait and color you use,” he theorizes. “It’s a reaction-oriented technique and the fish don’t get a good look at the bait – they aren’t going to not bite it because it has a blue flake instead of a red flake. I use baits that are short and compact and will get through a mat easily. I also want something that can imitate bluegill, shad and crawfish at the same time since that’s what they’re eating.”

Another little trick Daniels does is to utilize scent when punching, and not for the reason you may think.

“Adding scent never hurts, but it also lubricates your bait,” he says. “I always keep a can of BANG Fish Attractant up front on the boat and spray the bait to give it an oil-slick coating. It slides in much better through the mat.”

For weight size, Daniels goes with whatever will quickly get through a mat, from a ¾-ounce to a 2-ounce WOO! Tungsten NEVER CHIP Flipping Weight.

“You want to be efficient, but you have to keep in mind that the bigger the weight you use, the more fish you’ll lose,” he shares. “Those 2-ounce weights are so big and you lose fish due to their size. You just don’t land as many with the big weights in the mouth of the fish.”

To up his landing odds, he goes with a slightly smaller hook than some – a 3/0 Owner 4x Jungle Flippin’ Hook – and also scales back his braided line size to 50-pound Seaguar Smackdown Stealth Gray braid.

“The shorter shank (on the hook) gives you more leverage,” Daniels says. “For line, some guys like 65-, 80-, or even 100-pound braid for punching, but the thicker diameter just makes it harder to get through a mat. Fifty-pound is more than strong enough and if you can be a little more efficient during the day, you have more chances to get bit.”

Daniels has also thought through all of the details with efficiency in mind when it comes to rods and reels.

“A good 7-foot-6 to 8-foot heavy rod is a must,” he says. “You want it to have a parabolic bend while not being too stiff. The Favorite Fishing Pro Series has a nice flipping stick that has those qualities.”

For reels, Daniels sticks with a middle-of-the-road gear ratio.

“Those 8’s, 9’s, and 10’s are good at getting your bait back quickly, but you can’t turn on them and get fish in when they’re covered in a wad of grass,” he asserts. “A 7.1:1 is ideal and a nice happy medium between speed and torque.”

Aside from selecting the right gear, Daniels also pays attention to making his punching presentation.

“You want to be able to be a silent surprise into the mat,” he says. “I like to have a low trajectory if possible, just to be quieter. It varies on the cover, weight, and more, but trying to be as quiet as possible while still getting through the mat is key.”