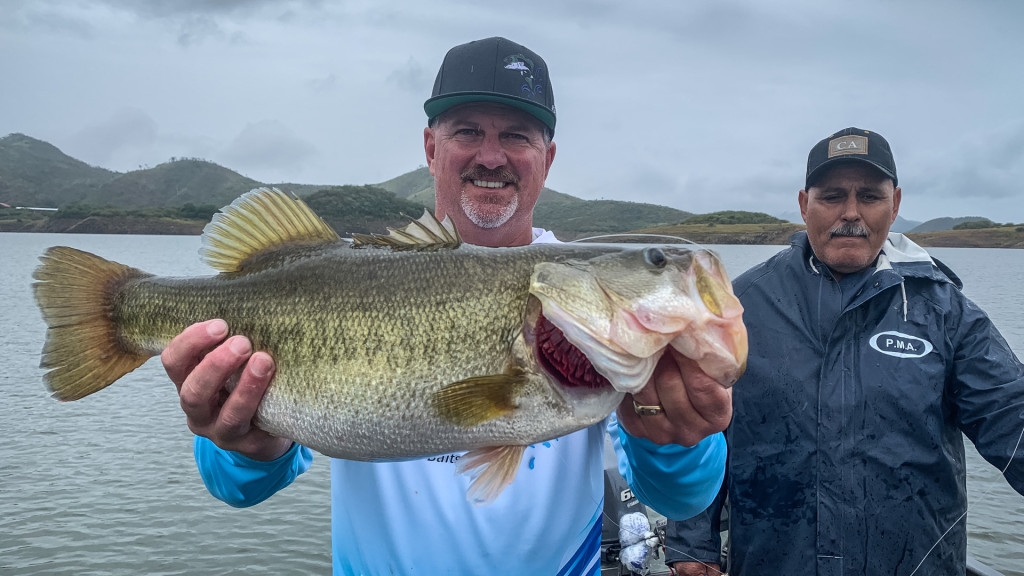 With a home base of Clear Lake in California, FLW Pro Circuit pro Jimmy Reese is pretty used to phenomenal fishing. But, until Thanksgiving, he’d never sampled the bass fishing in Mexico. Now he has, thanks to a Gary Yamamoto Custom Baits trip to Lake Baccarac Lodge that turned into the trip of a lifetime and produced some truly outstanding fishing.

A Fishing Story with Ronnie Green will air an episode with Reese on Baccarac on CBS at 7 a.m. ET on January 4th. You can watch a clip from the show here.

You can find out more about Lake Baccarac Lodge here. 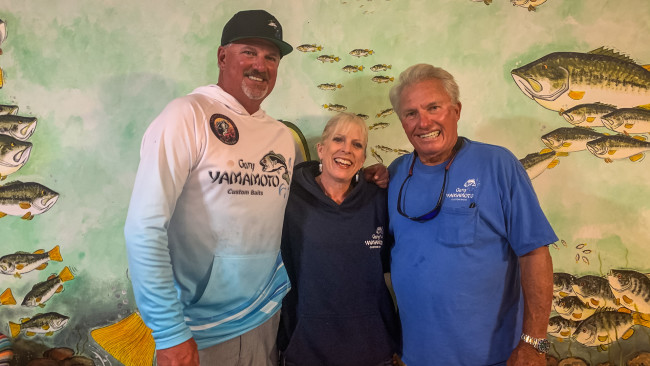 Yamamoto organized two weeks of fishing at the Baccarac as part of a media event, with Reese, his wife Catherine, Todd Woods, Tai Au and others participating in the second week.

“Some people were afraid and chose not to go, but the incidents that have happened there aren’t really the product of Americans doing things wrong,” says Reese. “It’s more the process of life down there in Mexico. I was a little worried, but after going, I would definitely go again.”

For the trip, everyone flew in to Phoenix, Ariz., and then hopped aboard two smaller planes to get to the lake.

“We flew to the border – close to it – and it was just typical customs, and they took the dogs through the plane,” says Reese. “Then we flew into Los Mochis; that was the second leg, it was about two hours. There they tore everything out of the planes and did a search with the dogs. But they didn’t pat us down or anything, and we didn’t have to go through metal detectors, and then we went through customs again. When we went through customs, they charged everyone $35, but they charged us $40 each the second week because they had seen all the tackle and knew they could.”

Reese says the flight after Los Mochis was super quick, and when they set down at a tiny airport near the lake they immediately were met by folks from the lodge.

“They basically met us with two or three Suburbans that were filled with cold drinks, and we got in and they drove us up to the lodge,” says Reese. “They do everything for you, carry your stuff in and everything, and they greeted us with ice cold margaritas for everybody.”

Reese says that the experience at the lodge was everything you’ve heard about. The actual accommodations are designed for you to spend most of your time on the lake, but the daily routine was off the charts.

“They fed us three times a day. We’d fish a half day and come in, and then go back out,” says Reese. “It started at 5 in the morning with eggs, hashbrowns, chorizo, bacon, sausage and fresh-squeezed orange juice – you name it. And there was really good coffee. I don’t know what kind it was, but it was really good. I think we all gained 10 pounds.” 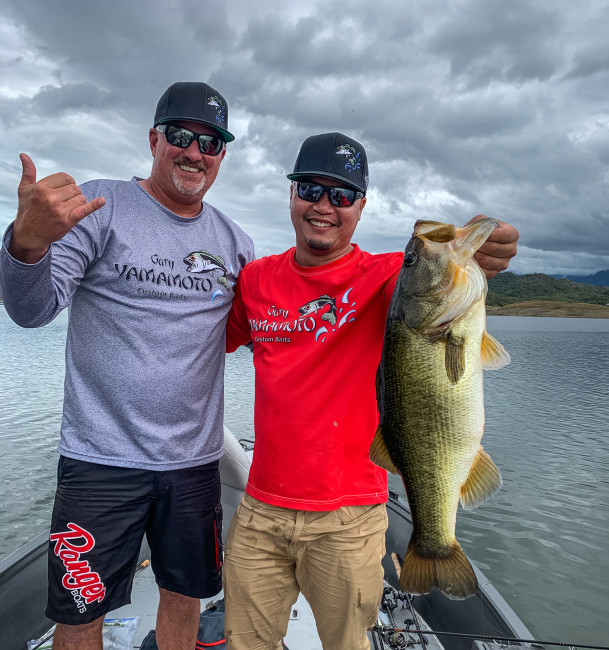 A different type of bassing

Besides being swamped in great food and cold drinks, pretty much everyone on the Yamamoto trips crushed bass every day.

Going out with different guides each day, Reese and the other anglers fished out of small boats that were outfitted with a tiller motor and a trolling motor. Though they’re a far cry from a fully-rigged bass boat, the boats more than got the job one. Most of the time the guides just drive, but Reese didn’t have too much trouble talking one of them into making a few casts one of the afternoons.

“He runs the trolling motor from the back, and they always point to where to cast,” says Reese. “All of a sudden, when he got ready to fish, he turns the trolling motor on high, and he hasn’t done that all day. Then he stops and my jig I had cast is now behind us. He turns around with his crankbait, and he just fires it out there. Wham … he catches a 6-pounder. Then he throws right back there and catches another, and he’s still telling us to cast forward. I finally caught on, and I pitched my jig underhand just to where he was catching his fish, and I don’t know what was down there, but I caught my biggest fish of the day then – an 8-pounder. So, these guys know what they’re doing, that’s for sure.”

Reese says the lake is a bit like a Rio Grande reservoir, with some similarities to other Texas lakes. The best part is that it isn’t crowded, despite not being very large.

“I’m guessing the lake is 12 or 15 miles long,” says Reese. “There are kinda two arms, and it is probably two-thirds the size of Clear Lake. The best part about it is that besides our six or seven boats there might not be another boat on the lake until the tilapia guys go out in the afternoon and set their nets.” 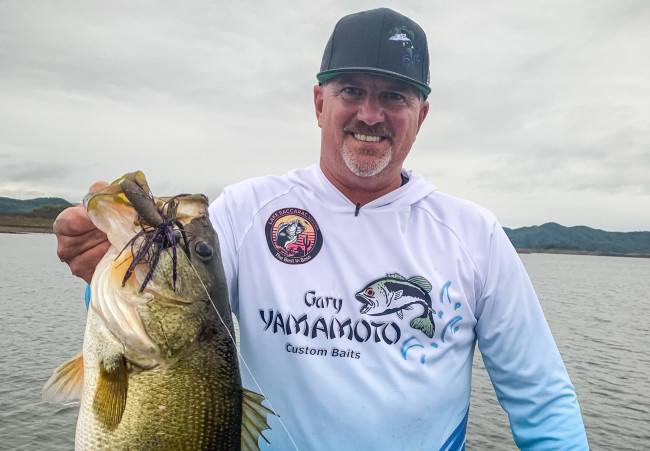 Despite poor weather for some of the trip, everyone enjoyed pretty phenomenal fishing the whole time. The crew as a whole accounted for three bass that were 11 pounds or better, and Reese’s biggest was one that went about 9 or 10 pounds.

The fishing was also extremely varied, with everything from topwaters and crankbaits to jigs, 6-inch Senkos and swimbaits playing.

“They pull up on these long, shallow flats with rocks on them mostly, but not really big, rough rock,” says Reese. “Yamamoto brought these big 10-inch Single Tail Grubs. I don’t know if they’re on the market, and we’d put them on football jigs and drag them. They’re the ugliest thing you’ve ever seen on a jig, but they work, and it’s just a matter of time before you have to hold on.

“We got four days of rain, and the water literally came up 25 or 30 feet,” adds Reese. “The last day I targeted that edge of the vegetation with a Neko rig with a big Senko and freakin’ whaled on them.”

The lake is absolutely loaded with tilapia, and Reese says they often saw big groups schooling peacefully get busted up by bass. At least once a day they pulled tilapia out of giant bass that were stuck on the surface.

One of the best baits was a swimbait, either a Yamamoto Heart Tail, a big internally weighted locally made swimbait or a Yamamoto prototype version of the local favorite.

“It probably resembles the tilapia,” says Reese of the big swimbait. “I’ve never seen anything like it. We have bluegill and crappie imitations, but these things are real heavy – 1 ounce, or maybe 2 ounces. You can hop it real slow or swim it and work it uphill. That worked.

“Some of the guys threw it a lot. Todd Woods did, and he whaled on them,” expands Reese. “The guys at Yamamoto made a mold and brought a bunch, but they didn’t have all the colors we really needed at the time, like sexy shad and the lighter colors.”

While the fishing had an amazing ceiling, it wasn’t so good that you could get tired of it. 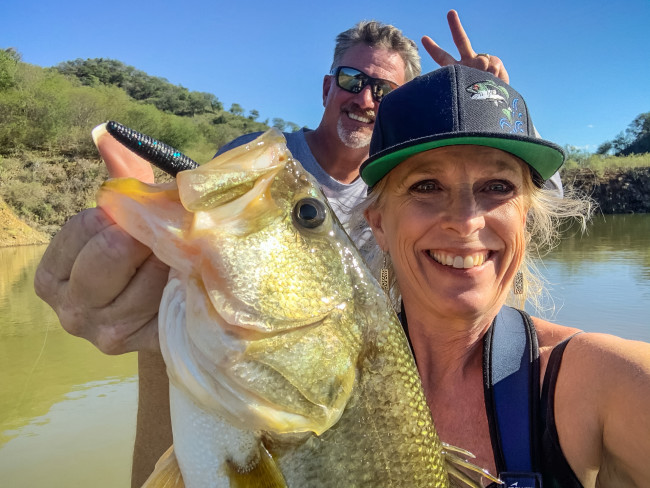 Through the whole week of incredible fishing, the highlight for Reese was a more personal one.

“It was all fun – the flights, the camaraderie, catching big fish,” says Reese. “The first four days it was raining, but the last day Catherine got to come out. She had her best day ever. She caught probably three 5-pounders and had a blast, so that was the best for me, watching her catch all those fish.”