Introduce a child to fishing and form a lifelong bond 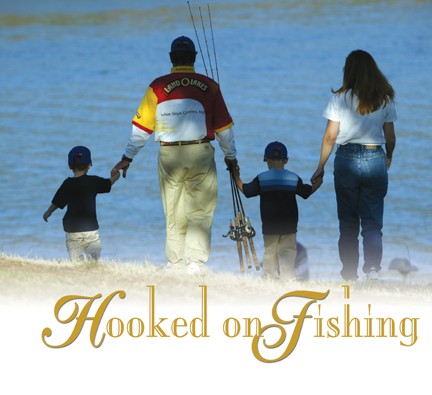 A chance meeting in a local DMV office reminded Ron Duncan of Springdale, Ark., how powerful the simple act of fishing can be. As a junior-high-school guidance counselor and mentor of the school’s fishing club, Duncan sees firsthand how much kids enjoy being near water with a rod in their hands. But for one child, fishing became more than a relaxing diversion. It turned out to be the only way he could overcome a devastating loss.

“This woman came up to me and asked me if I was the leader of the school fishing club. When I said yes, she said she had been meaning to thank me,” said Duncan, who founded one of the first Hooked on Fishing, Not on Drugs programs in the country nearly 20 years ago. “She told me about her son and how fishing had such an influence on his life. The boy wasn’t really into fishing at all when he joined the club, but I remember he really took to it.”

Her son liked it so much, she told Duncan, that the teenager convinced his dad to start taking him every chance he could. Father and son became regular fishing buddies, venturing off to local and distant waters together. But when the boy was in high school, his father was killed in a work-related accident.

“His mother told me how he would grab his fishing equipment and hop in his truck and take off when he got to thinking about his father,” Duncan said. “It was a way for him to relive those good times they shared, and that’s how he coped with the loss. His mother told me in the DMV that fishing is the only thing that pulled him through those most difficult times. When he got into college, he formed a Christian-based fishing club.”

As Duncan learned from that boy’s mother, fishing can have a profound effect on adults and children alike. It can be used as a temporary escape from the sometimes harsh realities of life, or as a lifelong way to form a lasting bond with friends and family.

Dion Hibdon, one of the Wal-Mart FLW Tour’s most recognizable and successful anglers, knows exactly how important the basic act of fishing can be. He recalls those times on the water with his father, Guido, as some of the most positive and influential of his life. Indeed, his father’s willingness to take him hunting and fishing when Dion was barely out of diapers is exactly why he excels not just at fishing but at raising three boys who share his passion for the outdoors.

Yamaha pro Dean Rojas, another FLW Tour heavy hitter, also grew up fishing, but he was more of a self-starter. “I kind of did it on my own,” Rojas said. “I really found fishing when I turned about 13, and I really fell in love with it as soon as I started. I knew at 14 what I wanted to do for a living, so I was fortunate and lucky.”

It is more important than ever to take children fishing and to foster their growth as anglers. More anglers mean more funds for fisheries management, and as our natural resources continue to come under attack from a variety of sources, it is critical to teach everyone, especially children, about the importance of clean water and air.

Hibdon says he started going on fishing outings with his father or uncles or family friends when he was old enough to hold a fishing pole. It is a pattern he has continued with his own boys.

“I don’t think a child can be too young to be introduced to the outdoors,” he said. “I took my boys when they were barely old enough to walk, and I’m convinced that really helped form a strong interest in fishing and the outdoors.”

Those early years will likely be more of an introduction to the water and the outdoors in general rather than slow-rolling spinnerbaits, reading depth finders or discerning the subtle differences between plastic worms and lizards. By taking toddlers to a lake bank on a warm spring day, you are developing that initial level of comfort that might be more difficult to overcome as they grow up.

Duncan, however, stresses that older children who do not have an interest in fishing can still be coaxed into trying, most often through a peer group. Studies have found that teenagers are most likely to take an interest in an activity if others their own age are participating. Encourage your children to join a club if one is available. If that is not an option, give your teenager the opportunity to invite a friend the next time you go.

“I’ve found that a lot of children don’t really form lasting hobbies until they are in their preteens or early teens,” Duncan said. “It’s never too late to start a child in fishing. What’s most important is that you try.”

A positive experience, start to finish

A successful day is not necessarily defined by pounds, limits or any other concrete proof of fish caught. To a child, a memorable experience is measured on a different scale. In other words, a child’s idea of fun is often different from an adult’s.

“The total experience should be positive, from the moment you walk out the door to the moment you get home,” Duncan said. “Stop at a tackle shop on the way and let them choose a lure that they can use when you get to the water. Let them take part in the decisions on where to fish and what to use, with some guidance, of course. Stop at McDonald’s on the way home. All those little things add up to make the whole experience a good one, and that’s what makes children want to go back again and again.”

Hibdon will often let his boys hop out on a lake’s bank in order to stretch their legs and have some fun chasing frogs or whatever they happen to encounter. They sometimes end up wet and muddy, but he tends to overlook those things as long as the three children are enjoying themselves.

“I don’t care if they don’t want to pick up a fishing rod all day,” Hibdon said. “As long as the whole thing is fun and they want to come back with me, I’m fine with that. I know they like to fish, and I have no doubt they will fish when they are adults, but right now, I’m just happy knowing they are having a good time, no matter what they are doing.”

Rojas’ two sons – Cameron, age 4, and Austin, age 2 – both love to fish, but Rojas is aware of the shorter attention span of a toddler.

“It’s not an all-day ordeal,” he said. “It’s just a matter of actually taking them. The worst thing you can do for a kid is have them out there all day. We only go for 20 minutes to half an hour. Then they get bored and want to do other boy stuff. I don’t push it on them. It’ll come.”

Duncan adds that under no circumstances should an adult force a child to do something he does not want to do. That is a sure way to kill any child’s budding interest. Hibdon agrees and says he always gives his boys the option of staying home.

“One of my boys only wants to go if he has a really good chance of catching something,” he said. “I’ll tell him the fishing may be tough, and I give him a choice. I don’t push it. He’s good at other things, and I’m happy that he likes to go when the fish are biting.”

Remember, it is their day. If they want to throw rocks at an idle bobber or spend the day chasing butterflies, let them. Even better, join them. What matters most is that you and your children have fun – together.

While kids can be entertained with a pocketful of rocks, a snack bag or a turtle sunning on a log, the ultimate goal of fishing, of course, is to catch fish. But too many adults are just not willing to sacrifice their day on the water in order to accommodate their children. Sight-fishing for bedding bass may be a thrill to you, but what 10-year-old has enough patience to make repeated casts to a skittish largemouth?

“Kids don’t care what they catch, but I do know from experience that they want to catch something, or they get bored really quick,” Hibdon said. “You may want to spend the day fishing for bass, but if you aren’t catching them, you better be willing to come up with a different plan.”

Duncan agrees and stresses the importance of targeting bluegills, crappies and other species that are much easier to locate and catch than bass. Even when he is practicing for a tournament, Hibdon will take time to let his boys cast to spawning bluegills or crappies ganged up around a beaver hut.

“Nothing is more important to a beginning angler than actually catching fish,” Duncan said. “You’d be amazed at how excited children get when they catch a tiny little bluegill.”

Rojas concurs. “The anticipation of getting a bite is probably the biggest thing for my kids,” he said. “They like being out on the water and watching the bluegills get caught. They like hooking them and touching them and all that fun stuff. It’s all new to them, and they just love it.”

The most important reason to take children fishing is not to help state wildlife agencies fund their programs, and it has nothing to do with conservation or the environment. Teach your children right, and those lessons will fall into place. Hibdon says he takes his children fishing often for the simple fact that it provides the ideal opportunity to spend time with his family.

“I feel so close to my boys thanks to fishing,” he said. “I rarely go fishing or hunting without them because I just enjoy having them there with me. They are my buddies.”

Most anglers learned how to fish from a family member, typically a father. But that does not mean you cannot teach other children about the thrill of fishing if you do not have kids of your own. All you need is a desire to share your knowledge and a little patience.

Youth-fishing clinics are held all over the country, and organizers are always in need of volunteers. Contact your local fish and wildlife office to ask about how you can help teach children to fish, or contact one of the organizations listed below.