Louisiana Enforcement Cite Anglers for Too Many Bass 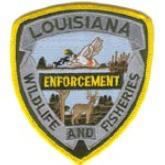 The agents were conducting surveillance near Lake Cataouatche in St. Charles Parish when they spotted the two anglers rapidly catching bass one after another. The agents continued surveillance until the subjects stopped fishing and returned to a camp beside the lake. When the agents contacted the subjects, they discovered 92 black bass in their possession. The daily limit for largemouth bass in Louisiana is 10 per person.

The bass were confiscated and later donated to a local charity. Officials declined to say what the men were using for bait.