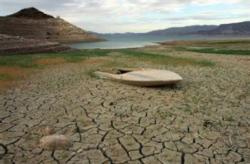 Lake Mead is now at its lowest level since 1937 when it was first filled. The lake level reached a historic low in mid October, after having fallen incrementally by 10 feet since October 2009.

Drought restrictions, which largely affect farmers along the Colorado River, will be implemented if the reservoir drops another 8 feet from its present 1,083 feet. The previous all-time low for Lake Mead was recorded in 1956 when it dropped to 1,083.19 feet.

Unless there is an unusual amount of snowfall and ensuing snowmelt next spring, officials don’t expect the lake to stop falling any time soon. Lake Mead is one of the most popular bass-fishing destinations in the Southwest.