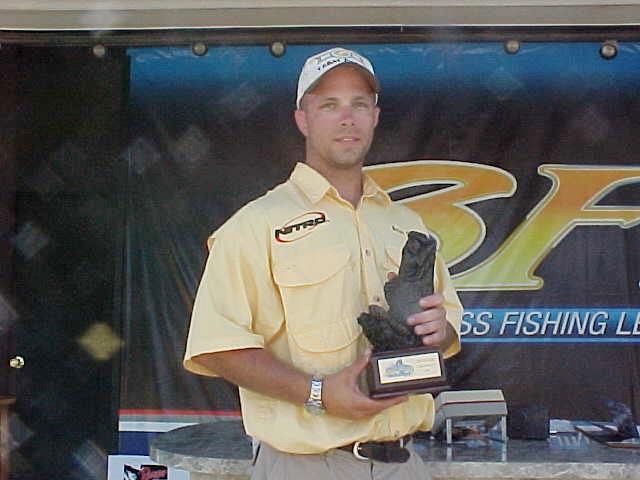 Caruso edged out Wayne Diffee of Oakhurst, Okla., by 2 pounds, 14 ounces in the one-day event that set out from Eufaula Cove. Diffee finished with a five-bass catch weighing 10 pounds, 1 ounce to win $2,338. Caruso caught his limit under cloudy skies while fishing a neon slugo around bushes in 4 feet of water.

Tyner won the boater Big Bass Award and collected an additional $700 with a 5-pound, 9-ounce bass that he caught on a 3/8-ounce jig with a hand-poured blue trailer.

Richard Holland of Tulsa, Okla., won the co-angler Big Bass Award of $342 with a 4-pound, 14-ounce bass that he caught on a purple tube.

Overall, 274 bass were caught during the tournament, including seven five-bass limits.

The BFL will visit Grand Lake Sept. 8-9 for a two-day Super Tournament that will decide the Divisional Points Champion who will be awarded $1,000. The co-angler amassing the most points by the conclusion of the season ending tournament will receive $500.

The top 30 boaters and top 30 co-anglers in the Okie Division will advance to regional competition Oct. 16-20 on the Red River near Shreveport, La., where they will go up against top competitors from the Cowboy, Arkie and Mississippi divisions for a shot at qualifying for the $250,000 All-American.