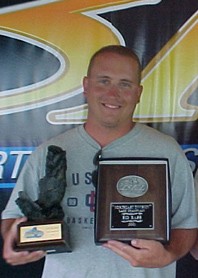 Sikorski edged out Ernie Freeman of Waldorf, Md., by 1 pound, 8 ounces in the one-day event that set out from South Bay boat ramp. Freeman finished with a five-bass catch weighing 17 pounds, 11 ounces to win $2,830. Sikorski caught his limit, including a 5-pound, 2-ounce bass that earned him $915 as the biggest bass in the boater division, using a black and blue grub.

Anthony Konchar of Maryland, N.Y., won the co-angler Big Bass Award of $460 with a 4-pound, 13-ounce bass that he caught while flipping in grass beds.

Overall, 1,094 bass were caught during the tournament, including 128 five-bass limits.

The Wal-Mart BFL will visit Thousand Islands Aug. 4 for the third of five events in the Northeast Division. The boater with the most points after the division’s season finale, a two-day Super Tournament Sept. 22-23 on Lake Champlain, will be declared the Divisional Points Champion and awarded $1,000. The co-angler amassing the most points by the end of the season will receive $500.

The top 30 boaters and top 30 co-anglers in the Northeast Division will advance to regional competition Oct. 9-13 on Chautauqua Lake near Jamestown, N.Y., where they will go up against top competitors from the Buckeye, Piedmont and Michigan divisions for a shot at qualifying for the $250,000 All-American.