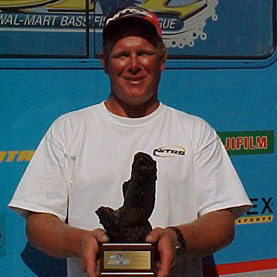 Ritter edged out Michael Hanson of Lansing, Iowa, by 11 ounces in the one-day event that set out from Colvill Park marina. Hanson finished with a three-bass catch weighing 7 pounds, 11 ounces to win $1,479. Ritter caught his bass using a pearl-colored super fluke near the Wabashaw Bridge.

Larry Carlson of Rochester, Minn., and Nathan Huss of Plymouth, Wis., tied for fifth and earned $542 each with a catch of 7 pounds, 1 ounce. Carlson had two bass, and Huss had three bass. One of Carlson’s bass weighed 4 pounds, 2 ounces and earned him the boater Big Bass Award of $335.

Overall, 185 bass were caught during the tournament and more than 99 percent were released alive.

The Wal-Mart BFL will visit the Mississippi River near La Crosse, Wis., Sept. 8-9 for the division’s season finale, a two-day Super Tournament, which will determine the Divisional Points Champion who will be awarded $1,000. The co-angler amassing the most points by the end of the season will receive $500.

The top 30 boaters and top 30 co-anglers in the Great Lakes Division will advance to regional competition Oct. 16-20 on the Ohio River near Paducah, Ky., where they will go up against top competitors from the LBL, Plains and Hoosier divisions for a shot at qualifying for the $250,000 All-American. The top two boaters and co-anglers may also qualify for the Ranger M1 tournament in Mobile, Ala., Feb. 27-March 2, 2002, where they can win up to $1 million in the world’s richest freshwater tournament.