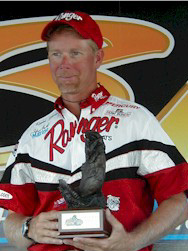 After qualifying for the final round of the two-day Super Tournament in second place with an opening day catch of five bass weighing 11 pounds, 14 ounces, Short out fished runner up Tony Nesterenko of Little Rock, Ark., by 1 pound, 10 ounces to take the win. Short also received a $1,000 bonus from Ranger Boats as the highest finishing participant in the Ranger Cup incentive program.

Nesterenko qualified for the final round in ninth place with three bass weighing 6 pounds, 12 ounces and finished up with a final round catch weighing 9 pounds, 15 ounces to win $2,518. He also won the boater Big Bass Award of $660 with a 4-pound, 6-ounce bass on opening day.

First place in the Co-angler Division and $2,403 went to Robert Bogard Jr. of Conway, Ark., who topped 64 competitors with a final round catch of five bass weighing 9 pounds, 14 ounces. Second place in the division and $1,202 went to Dale fisher of Benton, Ark., with 5 pounds, while Preston Long of Springdale, Ark., took third place and $601 with 4 pounds, 12 ounces.

Randy Hall of Sheridan, Ark., won the co-angler Big Bass Award of $315 with a 4-pound bass.

The top 30 boaters and top 30 co-anglers in the Arkie Division will advance to regional competition Oct. 16-20 on the Red River near Shreveport, La., where they will go up against top competitors from the Cowboy, Okie and Mississippi divisions for a shot at qualifying for the BFL All-American, which features an estimated purse of $345,000 and ranks as one of the most lucrative post-season tournaments in competitive angling. The top two boaters and co-anglers may also qualify for the Ranger M1 tournament in Mobile, Ala., Feb. 27-March 2, 2002, where they can win up to $1 million in the world’s richest freshwater tournament.