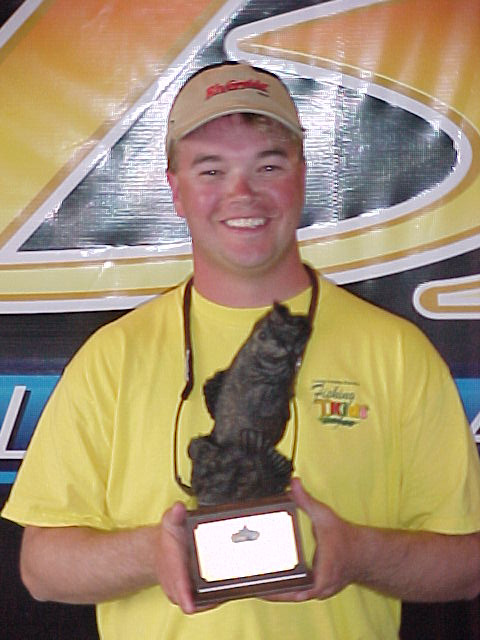 Horton caught his limit, including a 9-pound, 15-ounce bass that earned him big bass honors and a $730 bonus, while fishing grass in 3 to 4 feet of water near Browns Creek. The catch topped second-place boater Shannon Devere of Berea, Ky., by 4 pounds, 15 ounces. Devere finished the one-day tournament with a five-bass catch weighing 20 pounds, 11 ounces worth $1,997.

Danny Moss of Glencoe, Ala., claimed first place and $1,997 in the 146-competitor Co-angler Division with five bass weighing 19 pounds, 3 ounces. He surpassed second-place co-angler Jason McGregory of Moulton, Ala., by 3 pounds thanks to a 1/2-ounce blue Rat-L-Trap that he was fishing in 2 feet of water. McGregory finished with a five-bass catch weighing 16 pounds, 3 ounces worth $998.

Co-angler Tommy Kulk of Talladega, Ala., earned big bass honors and $365 in his division with a 5-pound, 4-ounce bass. He finished 19th overall with two bass weighing 7 pounds, 10 ounces.

Overall, 26 five-bass limits were caught during the tournament.

The Wal-Mart BFL will visit Lay Lake April 27 for the third of five Bama Division events. The boater with the most points after the division’s season finale, a two-day Super Tournament Sept. 21-22 on Lake Eufaula will be declared the Yamaha “Be the Best” Points Leader and awarded $1,000. The co-angler amassing the most points by the end of the season will receive $500.

The top-30 Bama Division boaters and co-anglers will advance to regional competition Oct. 22-26 on the Pearl River near Slidell, La., where they will go up against top competitors from the Arkie, Cowboy and Mississippi divisions for a shot at qualifying for the Wal-Mart BFL All-American – one of the most lucrative post-season tournaments in competitive angling.