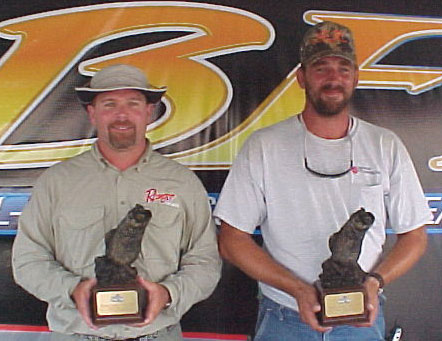 After qualifying for the final round of the two-day Super Tournament in fourth place with an opening-day catch of two bass weighing 6 pounds, 2 ounces, Hughes outfished runner-up Mike Sherley of Louisville, Ky., by 4 ounces to take the win. Hughes caught his limit on day two using a 3/16-ounce worm. He also earned a $1,000 bonus from Ranger Boats as the highest-finishing participant in the Ranger Cup incentive program.

Sherley qualified for the final round in 10th place with three bass weighing 4 pounds, 13 ounces and finished up with a catch weighing 7 pounds, 11 ounces to win $3,335.

Rodney Gunter of Ninevah, Ind., topped 112 competitors in the Co-angler Division to take first place and $3,305 thanks to a final-round catch of two bass weighing 3 pounds, 4 ounces. Second place in the division and $1,653 went to Kevin Allen of Muncie, Ind., with a two-bass catch weighing 2 pounds, 15 ounces, followed by Gary Melson of Louisville, Ky., in third place with two bass weighing 2 pounds, 10 ounces worth $757.

The top 30 boaters and top 30 co-anglers in the Hoosier Division will advance to regional competition presented by Yamaha Oct. 15-19 on Kentucky Lake near Gilbertsville, Ky., where they will go up against top competitors from the Great Lakes, Illini and Michigan divisions for a shot at qualifying for the BFL All-American, one of the most lucrative postseason tournaments in competitive angling.