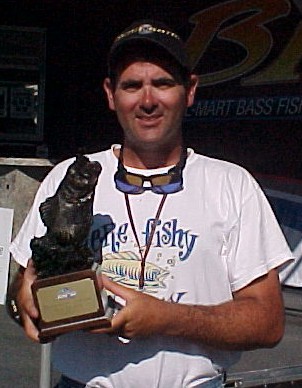 After qualifying for the final round of the two-day Super Tournament in fourth place with an opening-day catch of four bass weighing 17 pounds, 12 ounces, Mascadri out-fished runner-up Bob Myskey of Nice, Calif., by 6 pounds, 1 ounce to take the win. Mascadri caught his limit on day two using a black and green frog and a buzzbait.

Myskey qualified for the final round in sixth place with five bass weighing 15 pounds and finished up with a five-bass catch weighing 16 pounds, 5 ounces to win $2,002. He also earned a $500 bonus as the highest-finishing participant in the Ranger Cup incentive program.

Robert Lazzarini of Sunnyvale, Calif., topped 50 competitors in the Co-angler Division to take first place and $2,002 thanks to a final-round catch of five bass weighing 12 pounds, 13 ounces. Second place in the division and $1,001 went to Fil Torres of Orland, Calif., with a two-bass catch weighing 7 pounds, 5 ounces, followed by Frank Souza of Hayward, Calif., in third place with five bass weighing 7 pounds, 5 ounces worth $542.

The top 30 boaters and top 30 co-anglers in the Western Division will advance to regional competition Nov. 12-16 on Lake Havasu near Lake Havasu, Ariz., where they will go up against top competitors from the Colorado River Division for a shot at qualifying for the BFL All-American, one of the most lucrative postseason tournaments in competitive angling.