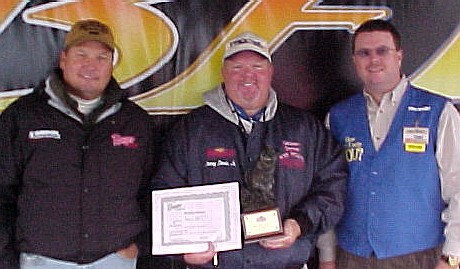 HOT SPRINGS, Ark. – Jimmy Davis Jr. of Willard, Mo., topped 120 competitors on Lake Hamilton this weekend at the Wal-Mart Bass Fishing League Lake Hamilton Regional. The postseason tournament featured the top 30 boaters from the Louisiana, Okie, Ozark and Gulf Coast divisions. Davis, who qualified for the regional through the Ozark Division, won a new Ranger boat powered by Evinrude or Yamaha and a new Chevy truck. He also earned a berth in the prestigious 2003 All-American, where he will vie for a top boater award of $100,000 cash.

The full field of anglers competed for two days to determine which six would advance to Saturday’s final day of competition. The final six started at zero Saturday, competing for position and prize money, having secured their All-American berths.

Eric Gilchrist of Baton Rouge, La., led the Co-angler Division with a final-round catch of two bass weighing 2 pounds, 3 ounces. His victory earned him an Evinrude- or Yamaha-powered Ranger boat and a spot in the All-American, where he will compete for a top prize of $50,000 cash.

Anglers advanced to this weekend’s regional competition by placing in the top 30 in the points standings within their respective divisions. Every angler who receives weight credit during the season earns points. Six regionals will each advance six boaters and six co-anglers to the All-American, while a seventh regional will send three boaters and three co-anglers. Another six boaters and six co-anglers will advance to the All-American from the Chevy Trucks Wild Card, which will be held Nov. 5-9 on Alabama’s West Point Lake. Anglers who fished all five regular-season tournaments within a division but did not advance to the regional can enter the Wild Card for a chance to compete in the All-American. The All-American is one of the most prestigious and lucrative events in bass fishing. The site for the 2003 event will be announced next month.