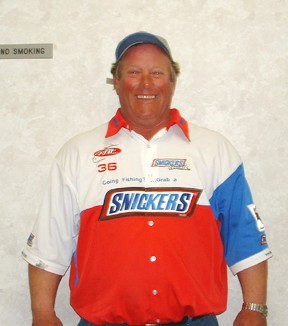 Pro Craig Workman of Fort Worth, Texas, claimed $10,000 plus a fully rigged Ranger 519VS Comanche as the winner of the TTT season opener on Lake Amistad. Angler: Craig Workman.
March 8, 2003 • MLF • Archives

DEL RIO, Texas – Pro Craig Workman of Fort Worth caught five bass weighing 25 pounds, 8 ounces to claim $10,000 plus a fully rigged Ranger 519VS Comanche as the winner of the Wal-Mart Texas Tournament Trail season opener on Lake Amistad. Workman finished first out of a field of 201 pros to claim his first TTT win.

Workman caught his bass on a Brush Hog, a Senko and a tube. He caught his hefty limit in sunny and warm conditions on the Rio Grande by casting over grass.

Bonuses are awarded to registered Ranger Boat owners who purchased their Ranger new from a Ranger dealer. Anglers must also fish out of a Ranger during the tournament to be eligible for the contingency.

David earned a $5,000 bonus from Ranger Boats as the highest-finishing participant in the Ranger Cup incentive program. He also earned a $500 gift certificate from Travis Boating Center for weighing in the heaviest bass of the tournament, a 10-pound, 11-ounce lunker he caught on a Falcon jig. Travis Boating Center, one of the nation’s largest retailers of Ranger Boats, sponsors 2003 TTT big-bass awards.

Garry Harris of Killeen topped 201 co-anglers to earn $4,000 cash as the winner of his first-ever TTT event. Harris caught five bass weighing 18 pounds, 10 ounces using a sour grape lizard. He was casting the lizard over the top of grass on the west side of Lake Amistad.

The $1 million Wal-Mart Texas Tournament Trail presented by Frito Lay will visit Sam Rayburn Reservoir near Jasper April 5 for its second regular-season event. Lake Lewisville in Lewisville will host the third regular-season event, a two-day tournament May 10-11, followed by the final regular-season tournament on Toledo Bend near Many, La., June 7. The top 50 pros and 50 co-anglers based on year-end points standings will advance to the Wal-Mart Texas Tournament Trail Championship Oct. 18-19 on Lake Ray Hubbard in Rockwall.