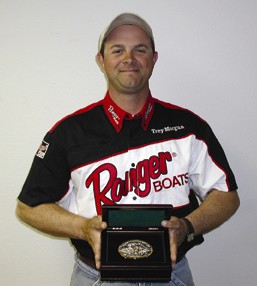 DEL RIO, Texas – Pro Trey Morgan of Goldonna, La., caught a two-day total of 10 bass weighing 29 pounds, 13 ounces to win $16,000 plus a fully rigged Ranger 519 VS Ranger boat at the Wal-Mart Texas Tournament Trail season opener on Lake Amistad presented by Yamaha. A field of 196 pros competed in the event.

Morgan threw a Fat Free Shad and 8-inch lizard near grass lines around secondary points to catch his winning weight. Morgan’s start to the 2004 tournament season is similar to last year’s. He placed second in the 2003 EverStart Series Central Division season opener held the first week of February on Sam Rayburn.

Bonuses are awarded to registered Ranger boat owners who purchased their Ranger new from a Ranger dealer. Anglers must also fish out of a Ranger during the tournament to be eligible for the contingency.

Along with the grand prize of $10,000 plus a fully rigged Ranger boat, Morgan earned $5,000 as the highest-finishing participant in the Ranger Cup incentive program. He also won the $1,000 Garmin contingency award for using all Garmin electronics on his boat. Bullard won the $500 Travis Boating Center big-bass gift certificate with a 7-pound, 13-ounce lunker. Travis Boating Center, one of the nation’s largest retailers of Ranger Boats, sponsors 2004 TTT big-bass awards.

Bill Guillory of Jasper topped 196 co-anglers to win his first TTT tournament and $4,000 cash plus a fully rigged 195 VS Ranger boat. Guillory caught 10 bass weighing 23 pounds, 2 ounces by Carolina-rigging Zoom plastics in 20 to 30 feet of water.

The TTT’s second stop will be March 6-7 on Sam Rayburn Reservoir near Jasper, followed by an event April 24-25 on Lake Texoma in Sherman. The regular season will come to a close May 22-23 with an event on Lake Travis near Jonestown. The top 50 pros and co-anglers based on year-end points standings will advance to the $195,000 Wal-Mart Texas Tournament Trail Championship Oct. 16-17 on Lake O’ the Pines near Longview. The winning pro at the championship can earn as much as $70,000 in cash and prizes, including a Ranger boat.