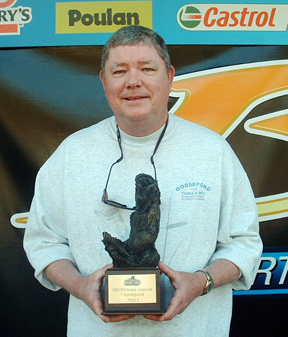 GUNTERSVILLE, Ala. – The 2004 Wal-Mart Bass Fishing League Choo Choo Division season kicked off Saturday on Guntersville Lake near Guntersville, and George Thorne of Albertville claimed the win thanks to a five-bass catch weighing 21 pounds, 9 ounces. He bested 200 Boater Division competitors to earn $5,000 and 200 points.

Thorne caught his tournament-winning bass on a Rat-L-Trap in the grass. The win was Thorne’s second BFL top-10 finish in a career that dates back to 1997. He also fishes select Bama Division events.

Marsh claimed Boater Division big-bass honors and $1,000 thanks to an 8-pound, 5-ounce bass that he caught on a spinnerbait. Randall Tharp of Gardendale earned $500 from Ranger Boats as the highest-finishing participant in the Ranger Cup incentive program, and he received another $250 from Yamaha because his boat is powered by a Yamaha outboard.

Kent Lodari of Seymour, Tenn., earned $500 as the Co-angler Division big-bass winner with a 7-pound, 11-ounce bass that he caught on a Rat-L-Trap.

The Choo Choo Division’s next stop will be April 3 on Wheeler Lake in Rogersville. Each BFL division features four one-day events followed by a two-day Super Tournament to round out the regular season. The top 30 Choo Choo Division boaters and co-anglers based on year-end points standings will advance to the Kentucky Lake regional presented by Yamaha near Gilbertsville, Ky., Oct. 12-16, where they will compete against Great Lakes, Hoosier and Michigan division anglers for a slot in the 2005 All-American. The winning boater at the All-American receives $100,000 cash, making it one of the most lucrative and prestigious championship events in bass fishing.