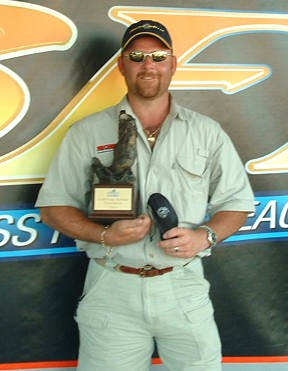 Crews fished the south end of the lake and used an 11-inch worm to catch his tournament-winning bass. He earned another $1,000 as the Boater Division big-bass award winner with a 9-pound, 8-ounce bass.

Wood earned $500 from Ranger Boats as the highest-finishing participant in the Ranger Cup incentive program.

Mark Brader of Loxahatchee claimed $2,500 as winner of the Co-angler Division with a five-bass catch weighing 20 pounds, 10 ounces that he caught on a Senko and a spinnerbait.

Following the regular season, the top 30 boaters and 30 co-anglers based on year-end points standings will advance to the Lake Seminole regional near Bainbridge, Ga., Oct. 5-9, where they will compete against anglers from the Bama, Mississippi and Piedmont divisions for one of six slots in the 2005 All-American. With a $100,000 cash prize going to the winning boater and $50,000 to the winning co-angler, the All-American is one of the most prestigious and lucrative events in competitive bass fishing.