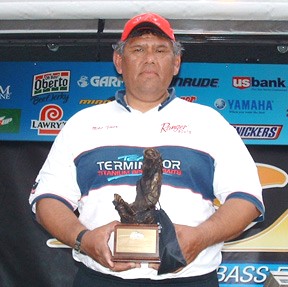 GROVE, Okla. – Boater Mike Tyner of Stillwater earned $4,206 Saturday as winner of the Wal-Mart Bass Fishing League Okie Division event on Grand Lake. The tournament was the second of five regular-season Okie Division events and featured 158 boaters vying for the win, which earned Tyner 200 points in the Boater Division.

Tyner’s winning catch of five bass weighed 19 pounds, and he caught them on a white spinnerbait with a Zoom trailer. He also earned a $1,000 bonus from Ranger Boats as the highest-finishing participant in the Ranger Cup incentive program.

Tied for second were Ron Shaw of Moore (five bass) and Andy Carroll of Fort Smith, Ark. (four bass). Both anglers earned $1,766 for their catch of 17 pounds, 3 ounces. Chris Chancellor of Claremore finished fourth with a five-bass catch weighing 15 pounds, 8 ounces worth $1,093, and in fifth was Jason Christie of Park Hill with five bass weighing 14 pounds, 12 ounces that earned him $925.

Bob Barker of Stillwater bested 158 Co-angler Division competitors to earn $2,103 as the co-angler winner, thanks to two bass weighing 11 pounds, 9 ounces that he caught on a crankbait. He and Brett Spurlock of Inola tied for co-angler big-bass honors. Each earned $197 for a 7-pound, 5-ounce bass.

Tied for second in the Co-angler Division were Jerry Christian of Sallisaw (three bass) and Wade Garcia of Alma, Ark. (five bass). Both anglers caught 10 pounds, 6 ounces worth of bass that earned each of them $883. In fourth was Don Linder of Ponca City with three bass weighing 9 pounds, 14 ounces worth $547, and finishing fifth and earning $463 was Terry Swart Jr. of Morrison with four bass weighing 9 pounds, 8 ounces.

The Okie Division’s next event will be held May 1 on Fort Gibson Lake near Wagoner, followed by an event on Keystone Lake in Mannford June 19. The Okie Division will wrap up its regular season Oct. 2-3 with a two-day Super Tournament on Grand Lake near Grove.