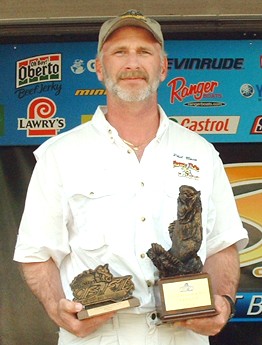 HENDERSON, N.C. – Boater Phil Bain of Youngsville earned $5,000 Saturday as winner of the Wal-Mart Bass Fishing League Piedmont Division event on Kerr Lake. The tournament was the second of five regular-season Piedmont Division events and featured 200 boaters vying for the win, which earned Bain 200 points in the Boater Division.

Butts earned a $500 bonus from Ranger Boats as the highest-finishing participant in the Ranger Cup incentive program.

Kotula earned $500 as the co-angler big-bass award winner with an 8-pound, 1-ounce bass.